As leaders and delegates from the 10 member states of the Association of Southeast Asian Nations (Asean) meet in Manila, it is important to know the facts and figures about the 50-year-old organization.

This year’s summit, which will be held at the Philippine International Convention Center (PICC) from April 26 to 29, 2017, will be the 30th time Asean leaders meet.

President Rodrigo Duterte is expected to meet with the leaders of neighboring countries and discuss regional issues such as those involving the South China Sea and the July 2016 decision on the West Philippine Sea by the UN Arbitral Court.

Here are #InquirerSeven fast facts about the 10 Asean member states:

1. Indonesia is the biggest economy in Asean

The Philippines, whose gross domestic product (GDP) numbers $292 billion, is tied with Singapore at fourth place when it comes to size of economy.

Among Asean member states, Indonesia has the biggest economy with $819 billion, followed by Thailand with $395 billion and Malaysia with $296 billion. 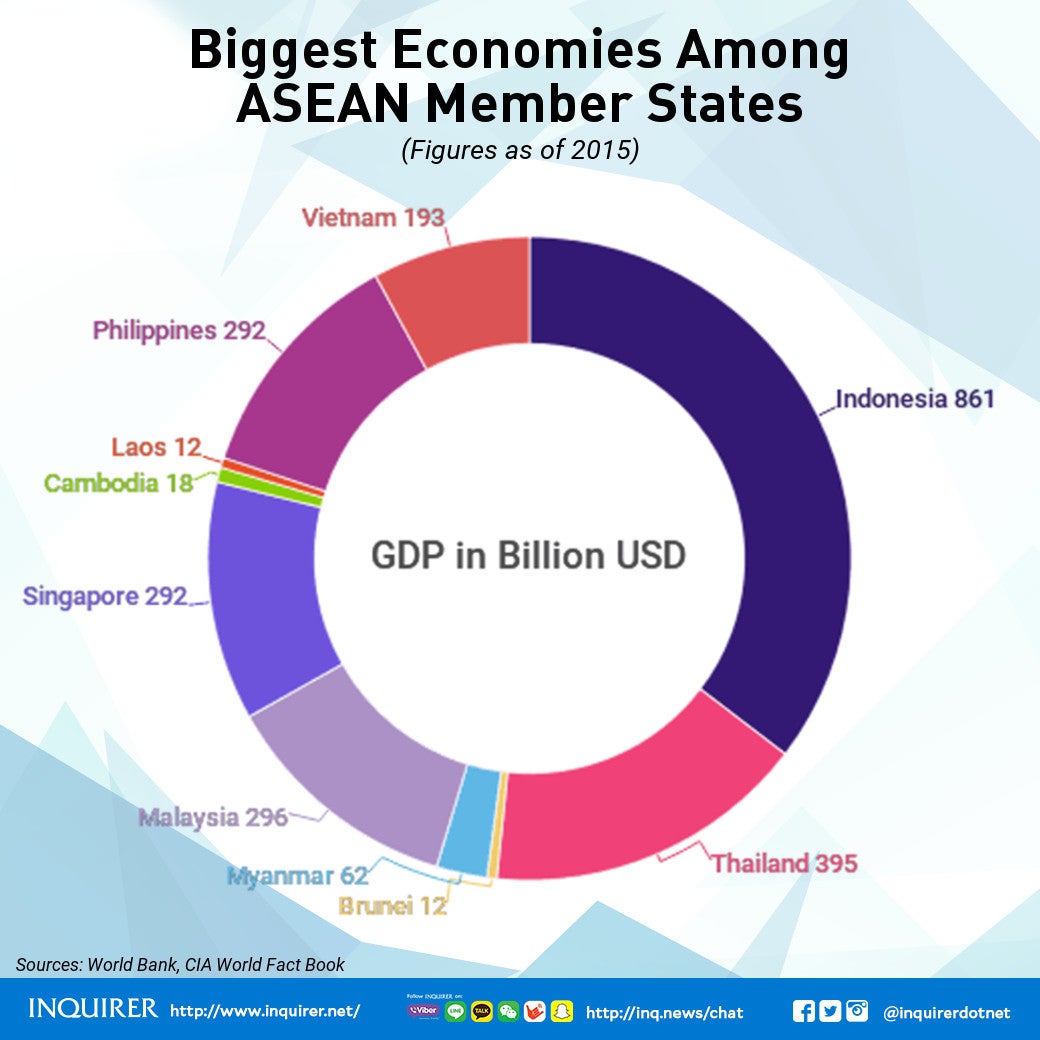 2. Laos has the fastest economic growth

With a growth rate of 7.4 percent in 2015, Laos grew the fastest in terms of economy among Asean member states.

The Philippines economy, in contrast, grew 5.9 percent, which puts it behind Myanmar, Cambodia and Vietnam. 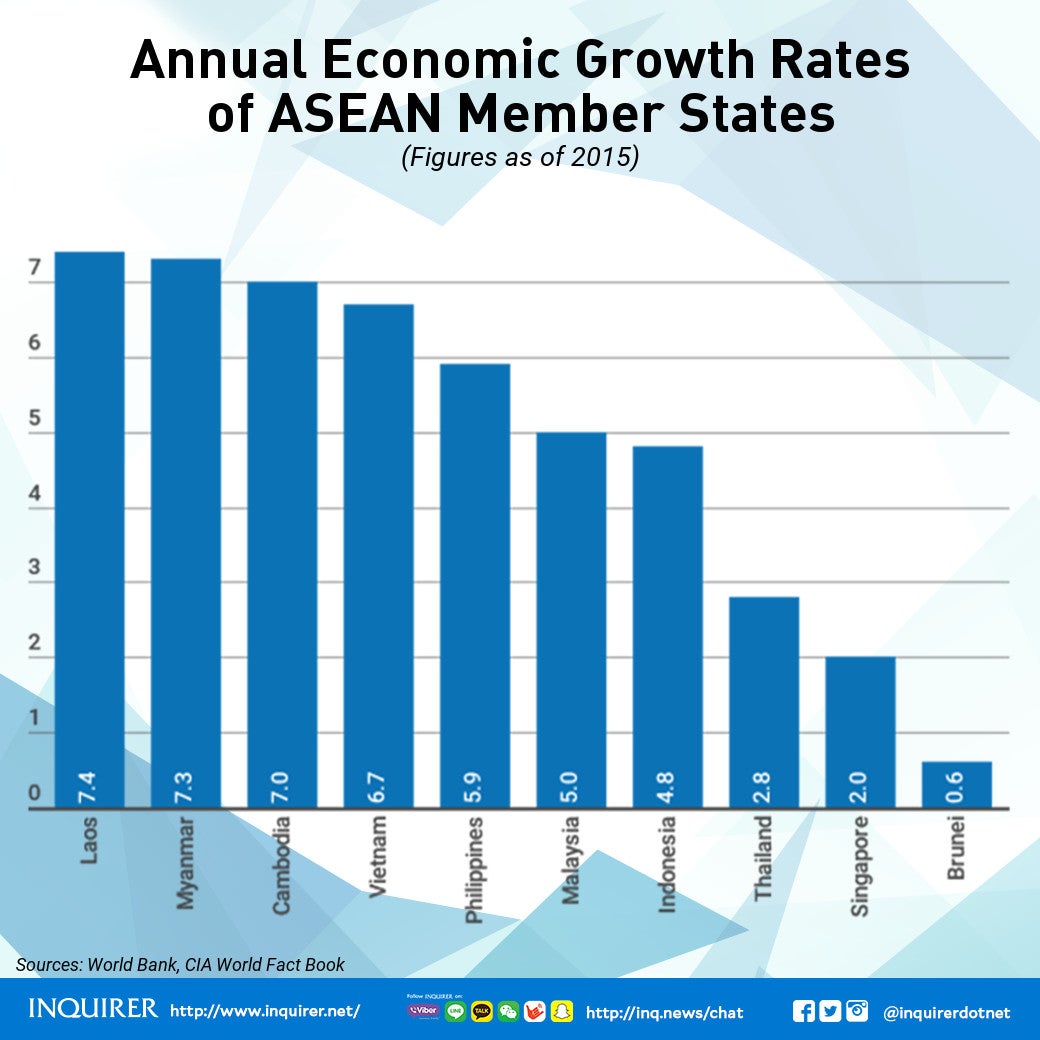 3. Indonesia has the highest population

Vietnam places third, with a population of 91 million. At last place is Brunei with the smallest population numbering only 423,188. 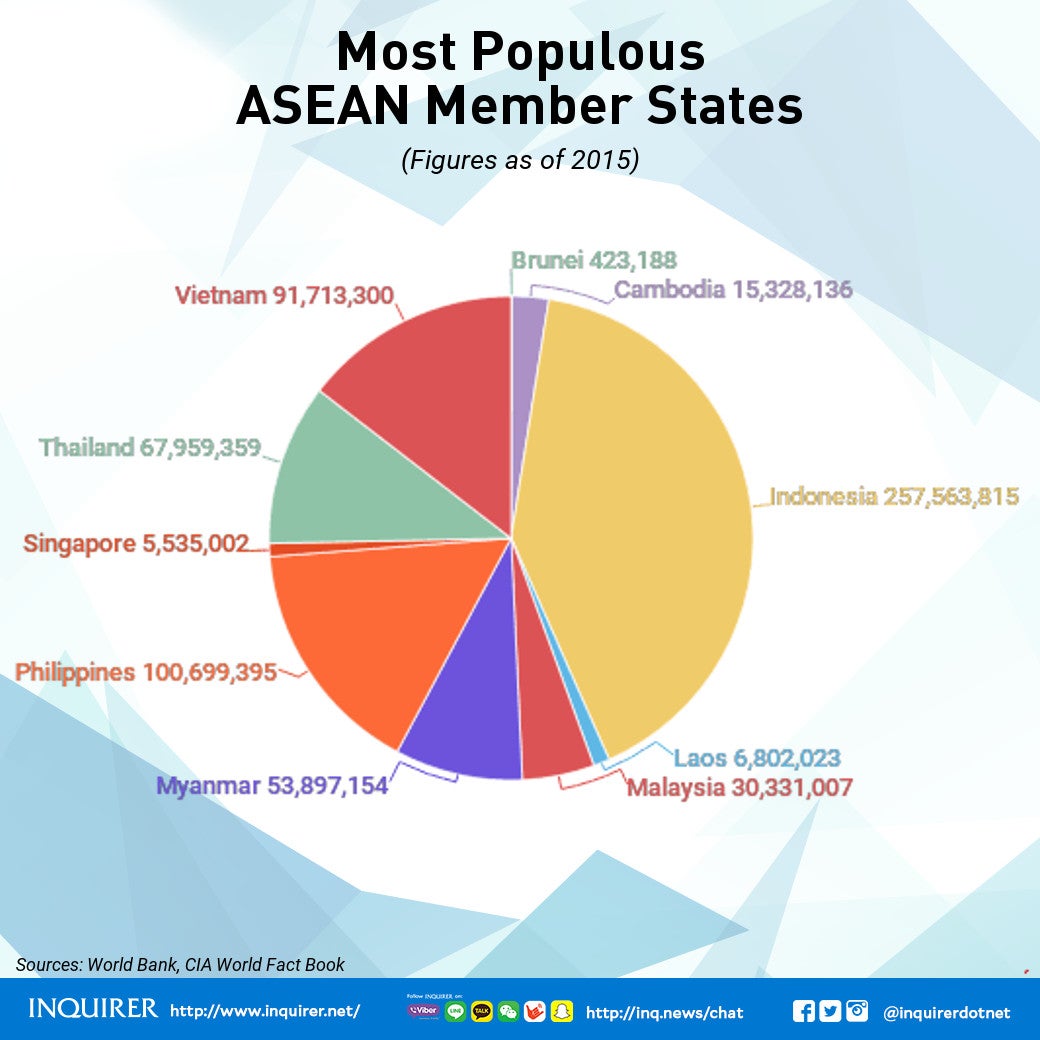 4. Vietnam has the fastest growing population

Vietnam may soon overtake the Philippines in terms of population, as it has the highest population growth rate among Asean member states with 2.1 percent.

And while Brunei may have the smallest population, it has the third fastest population growth rate at 1.6 percent just behind Singapore with 1.8 percent. 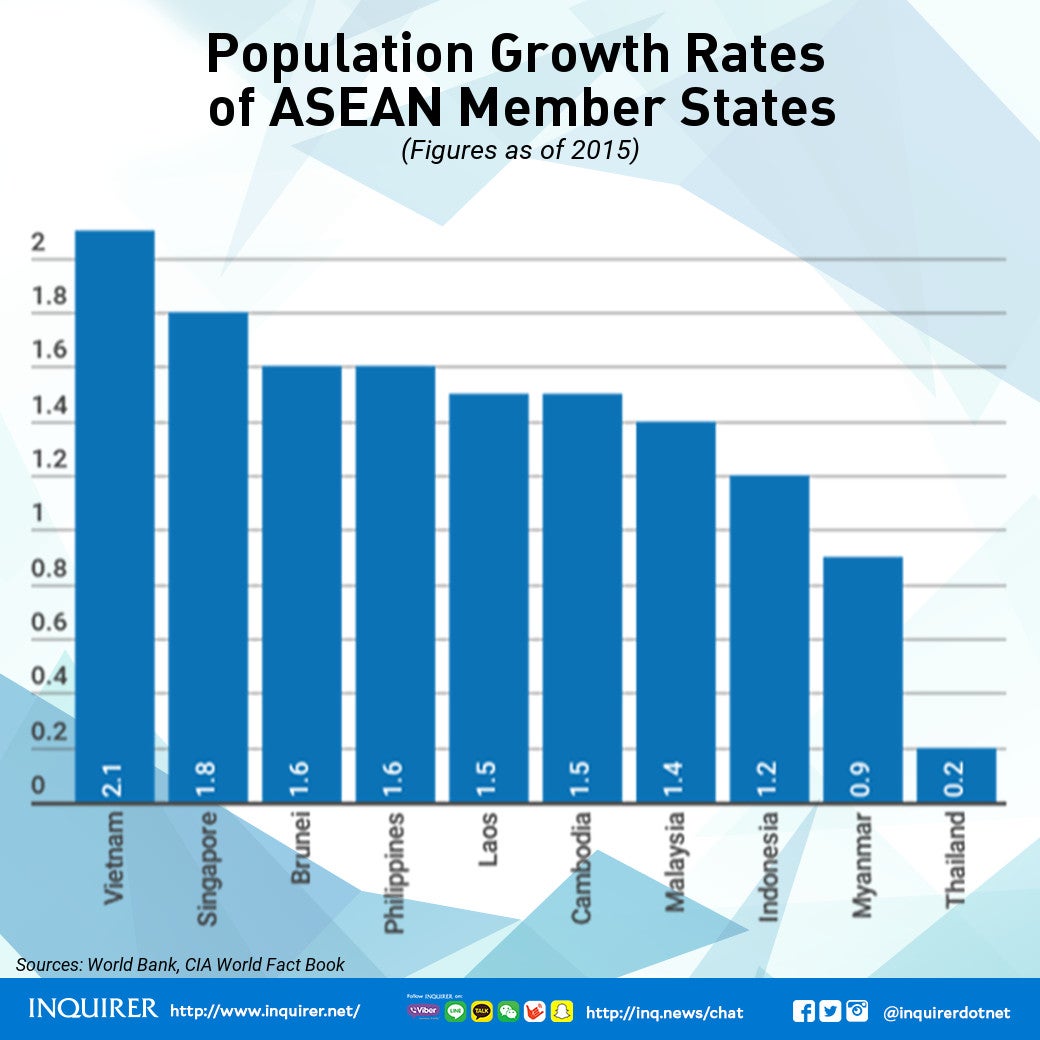 5. Philippines has the highest unemployment rate

The unemployment rate in the Philippines is the highest among Asean countries at 6.3 percent. Indonesia is a close second with 6.2 percent.

Thailand and Cambodia have the lowest unemployment rates among member states with just 0.2 percent each. 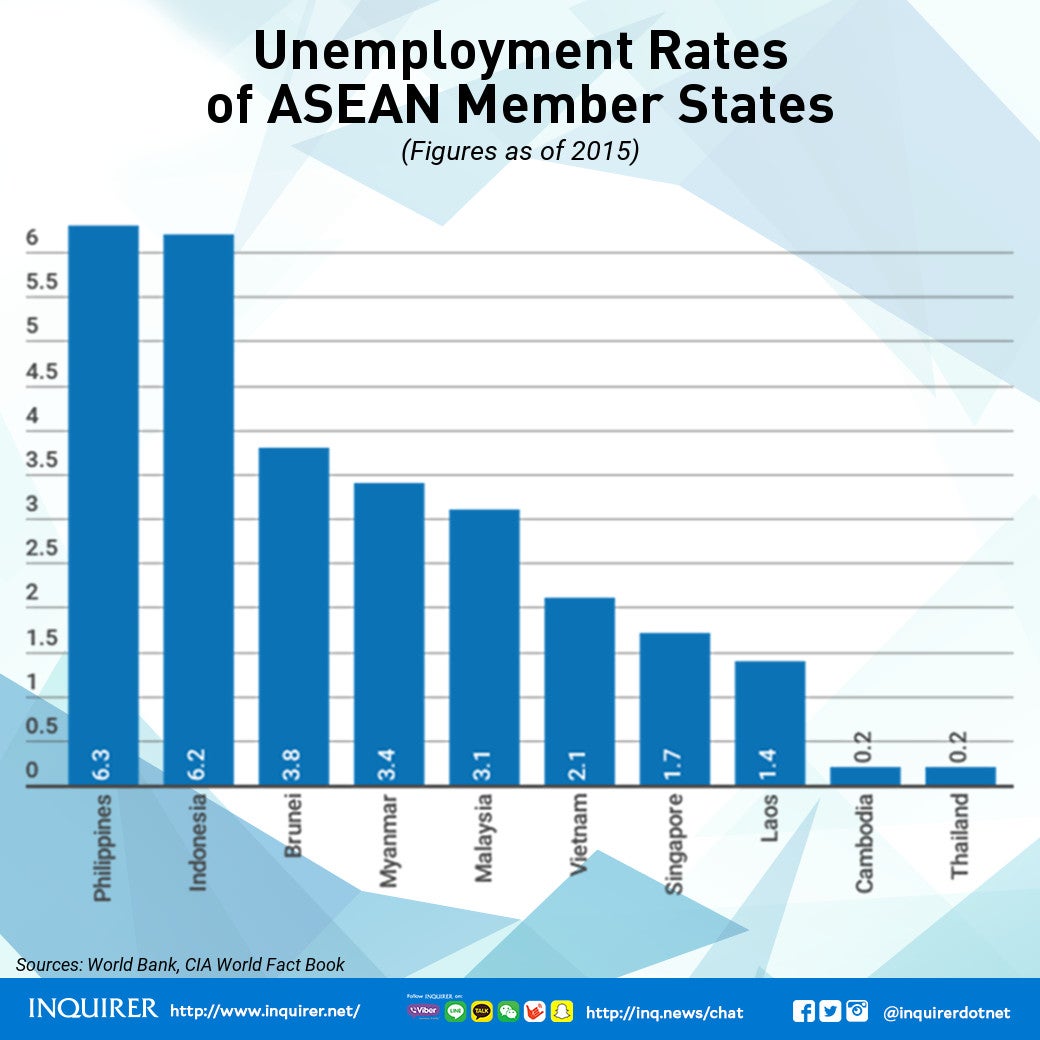 6. Singapore has the highest percentage of internet users

More than 82 percent (around 4.4 million) of the entire population of Singapore are internet users, the highest in the Asean region.

In the Philippines, 40.7 percent of the population (around 40 million) are internet users, putting the country in fifth place in terms of percentage of internet users. 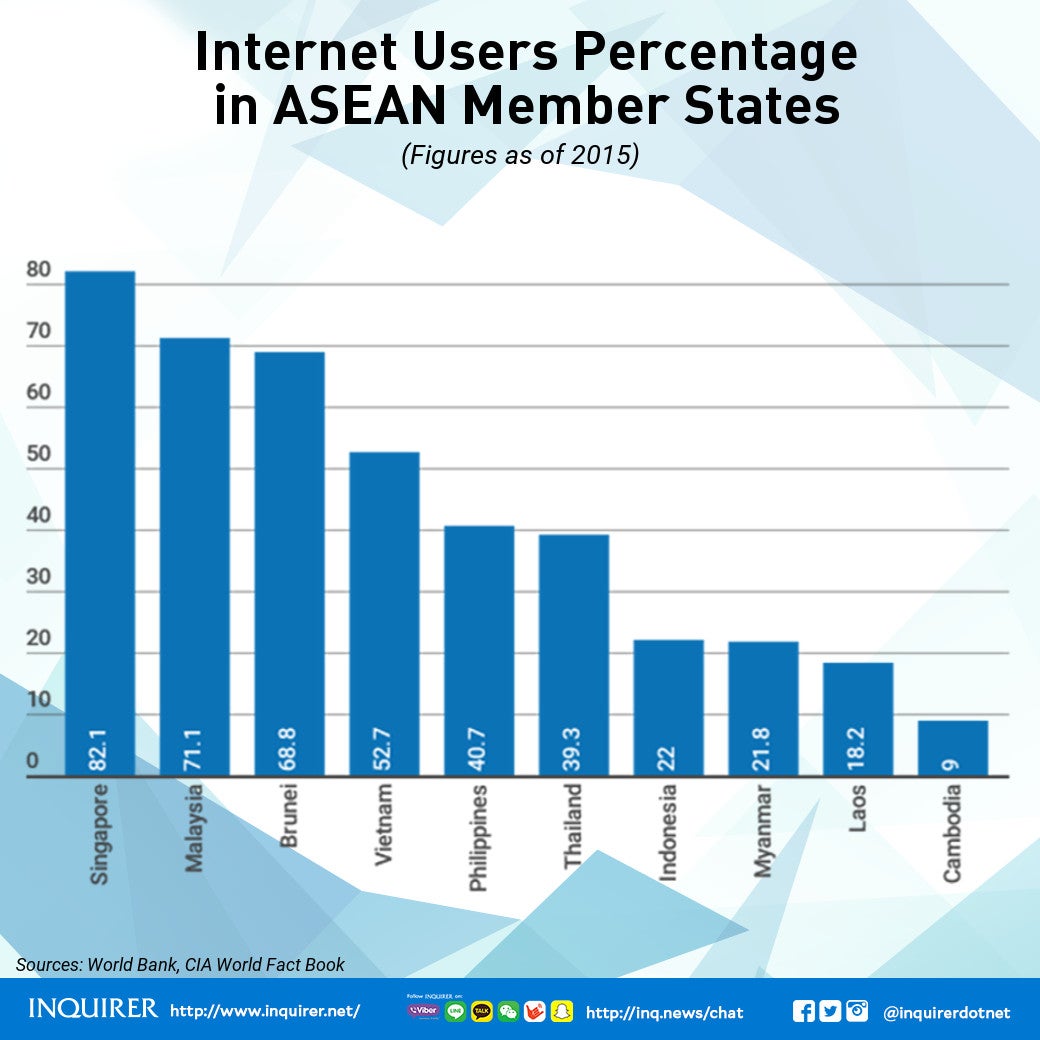 7. Thailand had the most number of tourist arrivals

Nearly 30 million tourists visited Thailand in 2015, making it the most popular among Asean countries. 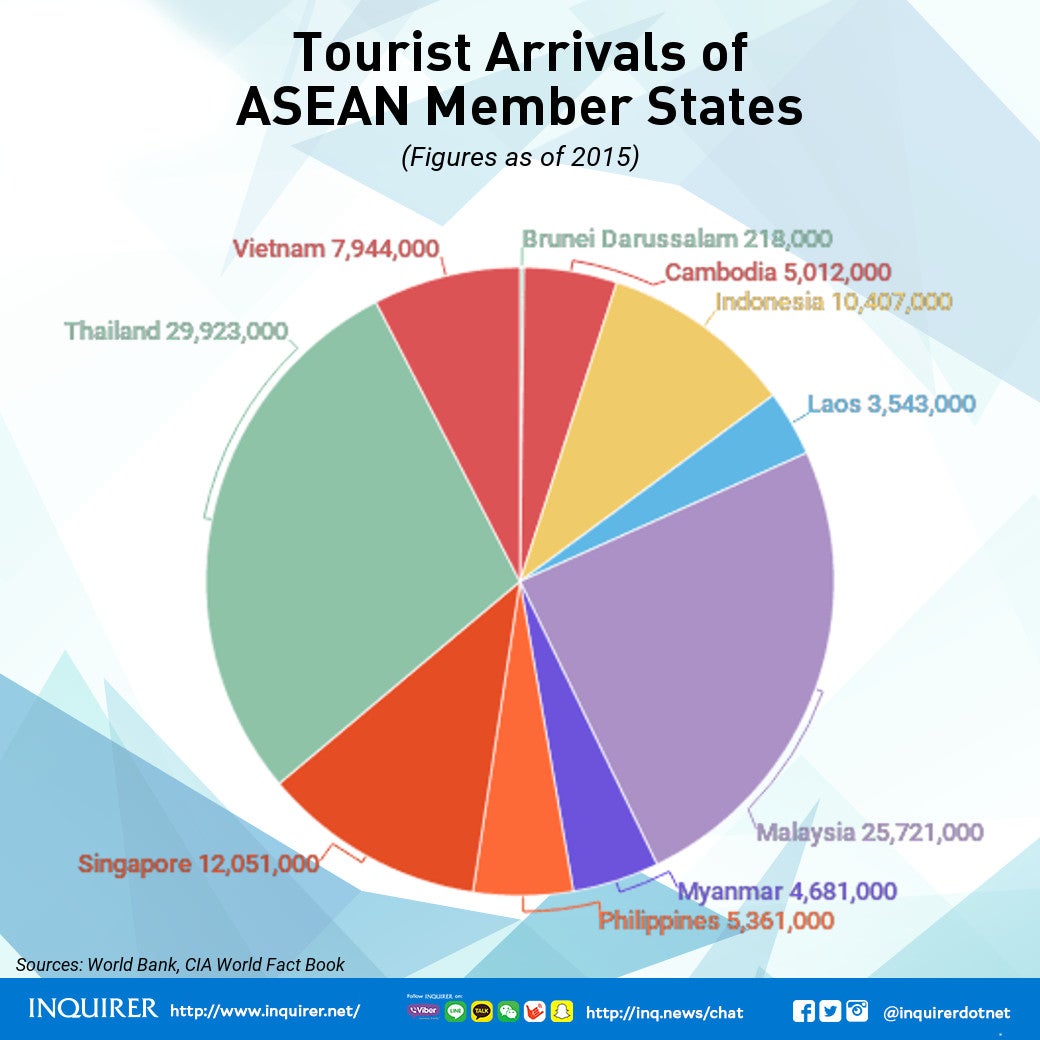 Bonus: Ranking of the population of ASEAN Member States 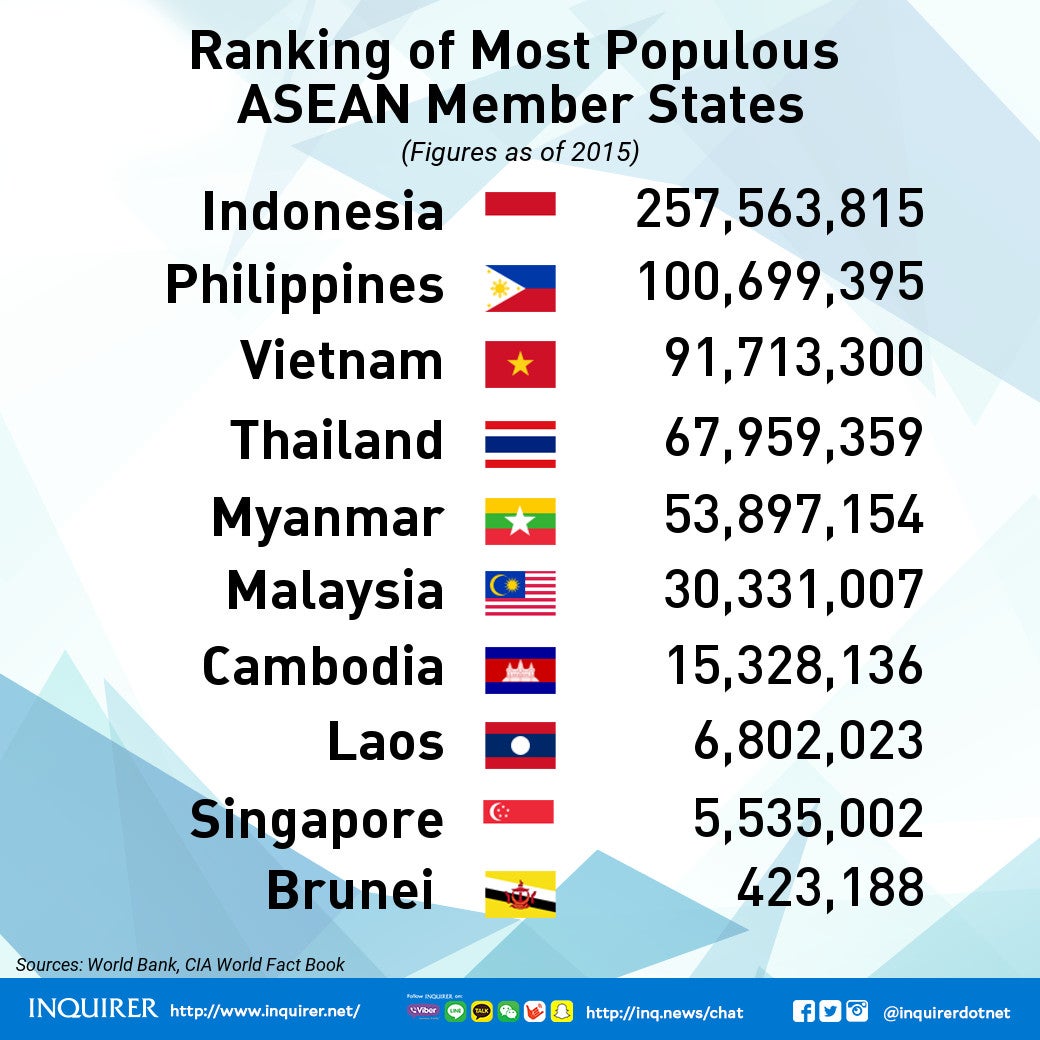 Gordon to admin execs: Why let Duterte use you to destroy PH Red Cross?