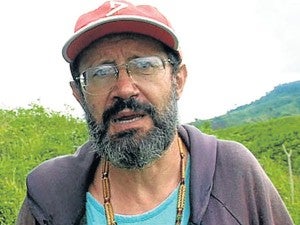 30 YEARS IN MINDANAO Undated handout photo of Italian missionary Fausto Tentorio who was shot dead outside a church in Arakan, North Cotabato, by a lone gunman armed with a pistol equipped with a silencer. PHOTO COURTESY OF PIME

As parish priest of Arakan town in North Cotabato, he survived a threat of abduction by an anticommunist paramilitary group called “Baganis” when he went to a remote village in Kitaotao, Bukidnon, also in October, eight years ago.

By his own account published on the website of the Pontifical Institute for Foreign Missions (PIME), the missionary group to which he belonged, Tentorio recounted how village people, mostly women, hid him inside a small cabinet in their hut and made their children play in front of the cabinet to mislead his pursuers.

People in a neighboring village then slaughtered a pig and invited the armed pursuers over, allowing Tentorio  to escape from the hut where he and four companions had been trapped.

“When they were gone, we left the hut, avoiding places where the Baganis were camped,” Tentorio said in his account of what happened to him on Oct. 7, 2003. “With the help of almost 300 people who facilitated our journey back, we were able to return to our parish in Arakan.”

Tentorio said he was supposed to celebrate his 20th year in the Philippines on Oct. 6, 2003, when he almost came face to face with death.

He said he set out that morning with four of his staff members to a remote Kitaotao town, where the church had organized an indigenous group called Tikulpa as part of its program to empower the Lumads.

After two hours of  riding on motorcycles and horses,  Tentorio said his group reached Barangay (village) New Kabalantian where people told him that armed men were lying in wait for him in  another barangay.

He was told that the armed group, called Baganis, planned to throw hand grenades at him when he passed by.

Despite the threat, Tentorio said he and his companions proceeded and walked to Sitio Malinao in another barangay, where people came running to him.

“Some people … told me that they heard that the Baganis would cut my head, roast my ears and eat them,” Tentorio said in his account. 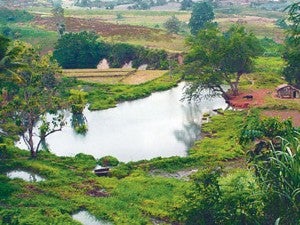 BEAUTIFUL ARAKAN This pastoral scene described in the PIME website as “somewhere in Arakan Valley” belies the reality of a fertile land right in the middle of an ethnic, religious and political “fault line.”

He said he stayed in Malinao and when night came, went to sleep in a small hut with around 15 people around him to protect him. At about 7:30 p.m., the Baganis arrived in the village.

“They asked, ‘Where’s the priest?’” Tentorio wrote. “The villagers answered, “He is not around here, why are you looking for him?”

“Will you kill him?” the villagers asked.

“No, we will just arrest him and bring him to our superior,” one of the Baganis said.

Villagers continued to deny that the priest was with them.

Tentorio said that later, some of the Baganis strayed near the hut where he was hiding and, using a flashlight, peeped inside.

“We kept quiet because we were afraid to be discovered and killed,” Tentorio wrote.

He said some Baganis attempted to go inside the hut  but one of the village women barred them, saying someone sick was inside and might be scared by the sight of armed men.

Luckily, the Baganis listened but they stayed in the village through the night.

Hidden in a cabinet

At dawn, the villagers became afraid that the armed men might see the priest through the holes in the hut so they kept Tentorio inside a small bamboo cabinet. Then they placed some of their children in front of the cabinet so it would not attract attention.

In the morning, people in a nearby village invited the Baganis to their place to eat a pig they had slaughtered.

“When they left, we discovered that the group was composed of at least 16 men, with firearms which included Garand, carbine, and locally made shotgun, and bolos,” Tentorio said.

Tentorio said that according to the villagers, they were told by the Baganis that they belonged to the 73rd Infantry Battalion. They tagged Tentorio as a “supporter of the NPA.”

It was after the Baganis had gone to the other village to eat the pig that had been slaughtered for them that Tentorio and his companions left their hiding place, according to the Italian priest.