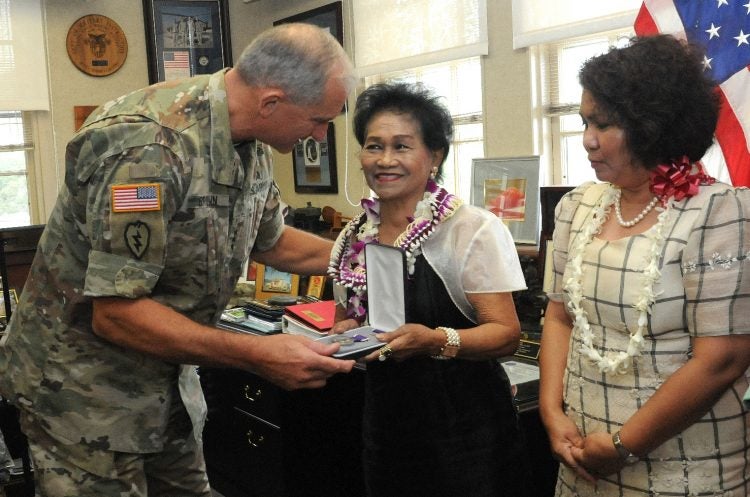 Gen. Robert B. Brown (left), Commanding General, U.S. Army Pacific, presents a replacement Purple Heart medal to Elisea Alagon Jamoralin (center), whose father Pfc. Adriano Alagon died while serving with the Philippine Scouts during the Japanese occupation of the Philippines. Looking on is Philippine Consul General in Honolulu Gina A. Jamoralin, the granddaughter of Pfc. Alagon. Photo from US Embassy in the Philippines website / U.S. Army photo by Staff Sgt. Christopher McCullough

The United States government has awarded a replica of a Purple Heart medal to the family of a Philippine Scout who fought in World War II.

The US Embassy in Manila said in a statement that Gen. Robert B. Brown, Commanding General of the United States Army Pacific, presented the replica to the daughter of Private First Class Adriano Alagon.

Alagon was posthumously awarded  a Purple Heart but it was lost in the aftermath of the World War II, the Embassy said.

The statement said the formal turnover of the medal was held at Fort Shafter headquarters in Honolulu, “a building used during World War II to plan for the liberation of the Philippines in 1944.”

Brown, who presented the medal, said “Through the horrors and terror of this period, we can take what endures over the years: the freedom and sacrifices made for our two nations by soldiers like Pfc. Alagon.”

Alagon’s granddaughter Philippine Consul General in Honolulu Gina Jamoralin was the one who contacted the US Army for the replacement medal.

“Today’s event is the culmination of my search for answers in what might have been forgotten by succeeding generations,” she said. “While we miss our grandfather, we are consoled by the fact he died for his country and we are deeply proud of him.” KS/JE/rga