Pilot ejects from jet on US aircraft carrier headed to Korea 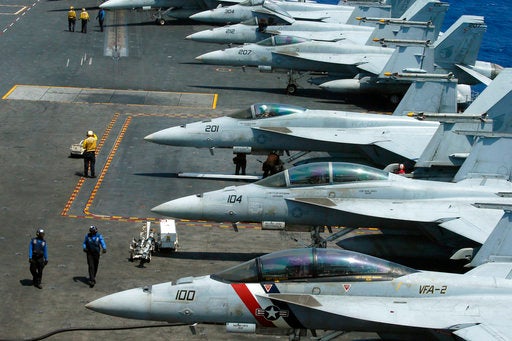 A row of F18 fighter jets on the deck of the USS Carl Vinson is prepared for patrols in the waters off the disputed South China Sea. (AP File Photo)

WASHINGTON — The US military says a pilot has ejected from a fighter jet operating from the USS Carl Vinson aircraft carrier in seas south of the Philippines.

The US Seventh Fleet says the pilot was conducting routine flight operations late Friday local time during a transit in the Celebes Sea.

The Vinson has been making its way from Singapore to the Sea of Japan since last week, making stops in Asia along the way as it heads toward North Korea in a show of force.

The pilot ejected from the F/A-18E fighter aircraft on final approach to the carrier, and was quickly recovered by a helicopter and suffered no apparent injuries. The jet was ditched in the sea.

The Seventh Fleet statement says the incident is under investigation.