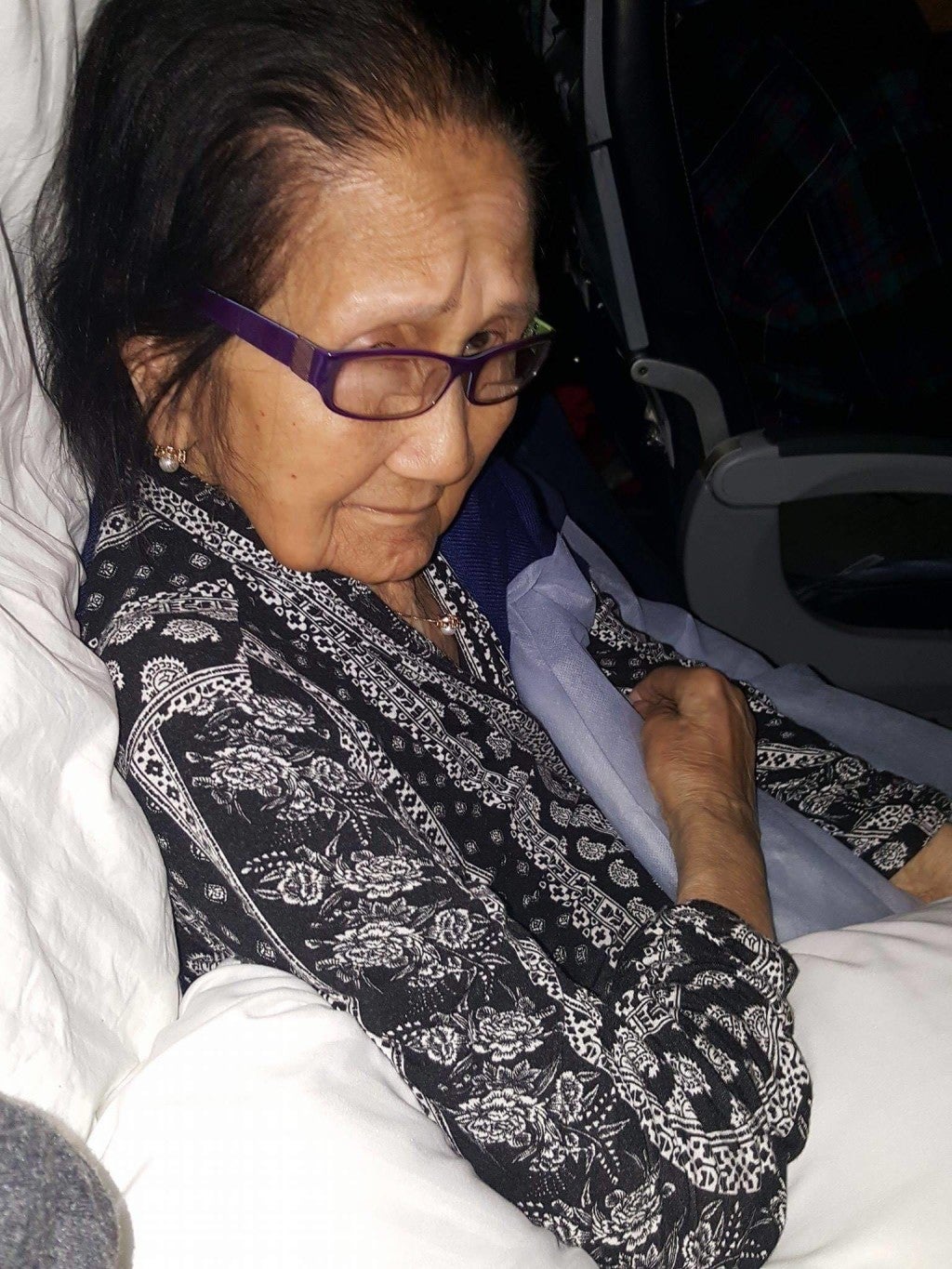 The family of 94-year old Paz Arquiza was heartbroken by what she had to endure after she was booted by United Airlines from her Business Class seat and moved to Economy on her flight from Los Angeles to Melbourne, Australia.

Arquiza had not had long trips for four years. She is suffering from severe arthritis and degenerative bone structure in her neck.

But after Arquiza got a clearance from her doctor, Marianne Santos Aguilar said the family pitched in to buy their grandmother a Business Class ticket to ensure her comfortable travel.

In their discrimination complaint against United Airlines dated Feb. 8, 2017, Rose Benedicto, Arquiza’s mother said the flight from Melbourne to LA was comfortable.

“She was able to sleep and was very comfortable in Business Class,” Benedicto said adding that the flight attendants made every effort to accommodate her request to assist her mother as needed.

But their experience on United Airlines Flight 98 from Los Angeles to Melbourne on Feb. 2 was different.

Benedicto said when she assisted her mother to the restroom, one of the flight attendant named Shauna rolled her eyes at her.

When she asked Shauna if she could assist her mother with some tasks like reclining her seat and opening food containers she said the flight attendant told her that “people pay to be in Business Class,” referring to her.

Benedicto was seated at the Economy class.

READ: Uproar over video of passenger being dragged off overbooked flight

“With the hope that my mother could stay in Business Class, I asked Shauna if she can help my mother open her butter because aside from fruits, bread with butter is most likely the only food she will eat during this flight due to her age. Without a word, Shauna abruptly turned her back on me,” Benedicto said.

She said Shauna and the other flight attendant gave her two options: 1. have her mother sit in Economy with her or 2. get off the flight and reschedule the following day so she could purchase a Business Class ticket for herself to sit with her mother. The United Airlines employees told her she had five minutes to decide since the flight was taking off.

Benedicto said she talked to her mother and explained that no one would assist her if she stayed in Business Class. Arquiza agreed to be moved to Economy.

Upon their arrival to Melbourne, Arquiza’s legs had swollen due to poor circulation from prolonged sitting. She also suffered a stiff neck and body aches. Her doctor had to prescribe a stronger medication and Valium to help her sleep.

Aguilar said they filed a complaint but United had not even apologized.

Two months after the incident, United emailed them only to tell them that the airline was already processing the refund of AUD$1,149.75 since Arquiza did not stay in Business Class. Her family had paid AUD$4,827.00 for that accommodation.

In that same email, United promised to get back to them after two weeks.

Aguilar said her grandmother was ok now “but we are forever tainted by this incident.”

Last April 9, United Airlines dragged a passenger off a flight that the airline had reportedly overbooked in Chicago.

Video of the incident and later photos of a bloodied passenger, David Dao, drew widespread criticism for United Airlines.

Like Arquiza, Dao is of Asian descent. Reports say Dao, who lives in Elizabethtown in Kentucky, traces his roots in Vietnam. CBB/rga