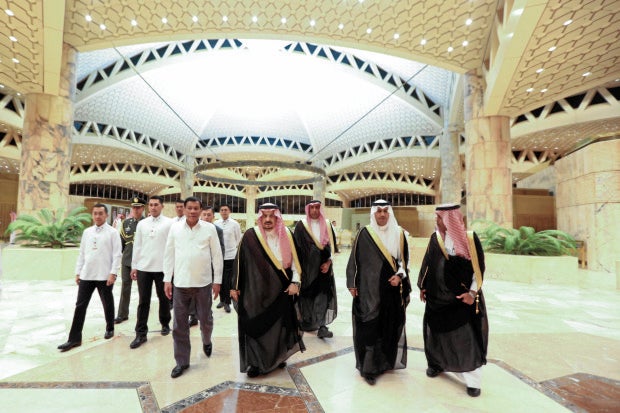 Abella said the President would also make use of data, which showed that country has become the fastest growing economy in Asia, to entice Saudi investors into setting up companies here.

Duterte was scheduled to speak at the Riyadh Investment Forum spearheaded by the Saudi Chamber of Commerce around 2:30 p.m. local time (7:30 p.m. Manila).

Abella said it has been Duterte’s strategy to present the Philippines as an “investment destination of choice” by citing his efforts to stamp out criminality and corruption.

The President has fired nearly 100 government workers and officials, including those whom he had appointed in the Cabinet, after they were linked to corruption scandals.

Interior secretary Ismael Sueno, one of his avid campaigners during the election period, was the latest to be sacked.  Sueno has denied he was involved in any corruption alleged in the procurement of trucks from Austria.

“The sincere and genuine intentions to implement reforms, as well as the will to put an end to corruption and crime may also be used as contributory factor in convincing Saudi businessmen to put their investments in the country,” Abella earlier said.  SFM