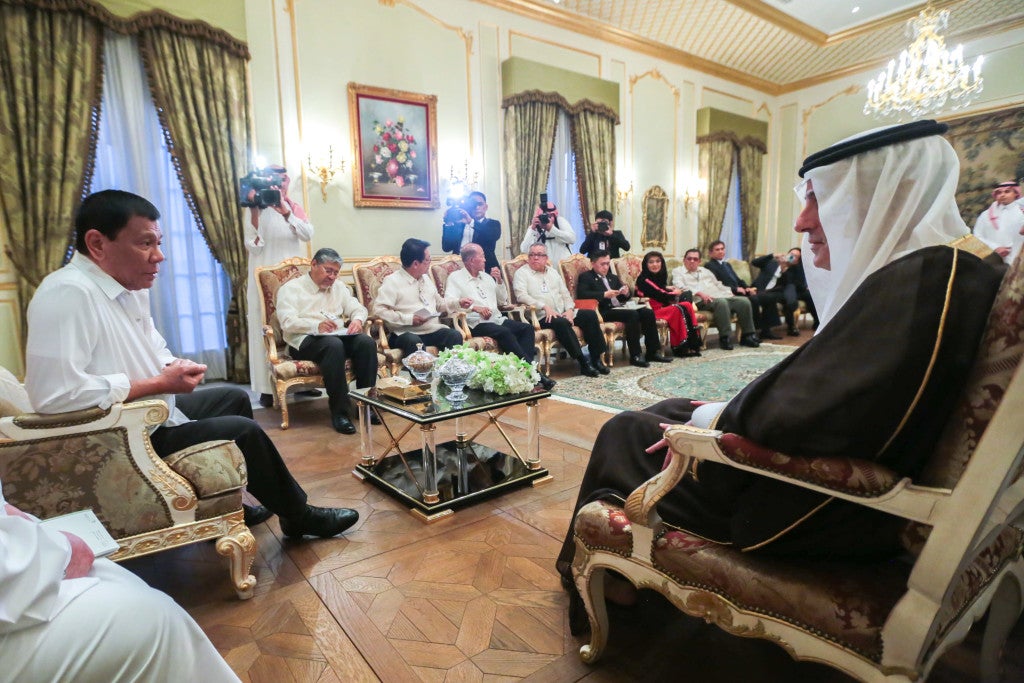 President Rodrigo Duterte along with members of his delegation meets with Senior Officials of the Kingdom of Saudi Arabia Ministry of Foreign Affairs during a courtesy call at the European Saloon of the King Saud Guest Palace in Riyadh on April 11, 2017. ALBERT ALCAIN/Presidential Photo

RIYADH—President Duterte and Deputy Crown Prince Mohammad bin Salman discussed possible intelligence sharing in a meeting at the private residence of Saudi King Salman bin Abdulaziz al-Saud here on Tuesday, considering that the Philippines and Saudi Arabia had a common enemy in the Islamic State (IS) group.

IS, or Daesh in Arabic, is reported to have established links with Philippine militants, such as the Maute group of Lanao. IS has declared an Islamic caliphate in parts of Syria and Iraq, implementing its harsh version of Islam, which runs counter to the stand of Saudi Arabia.

The Gulf kingdom is known as the center of the Islamic faith with the king as the caretaker of the two holy mosques in Mecca and Medina.

IS whose territory has shrunk amid gains by its enemies, such as the United States, Turkey, Iraq and their allies, has been blamed for the spate of attacks in Europe and the Middle East. The attacks included last week’s bomb blast outside a Coptic church in Egypt .

Esperon said that among the things that the crown prince asked Mr. Duterte was how the Philippines was protecting its coastlines against the possible intrusion of transnational terror groups.

They also shared information on efforts to thwart terror attacks, he said.

On Tuesday, the Saudi king expressed his gratitude to the Filipino people, who he said, had greatly helped his subjects in their daily activities.

The Saudi monarch met Mr. Duterte and the official Philippine delegation at his private residence for the second time for bilateral meetings. The king earlier met Mr. Duterte, shortly after his arrival on Monday.

King Salman told Mr. Duterte that the Philippines had an immense contribution to Saudi Arabia’s economy by providing it professionals and other skilled workers.

There are 763,825 Filipinos in Saudi Arabia, including 21,250 undocumented or irregular migrants, according to data released by Malacañang.

King Salman was visibly elated at the President’s visit and stayed during the signing of bilateral agreements between his kingdom and the Philippines.