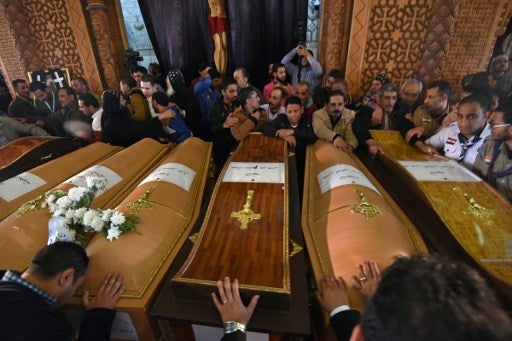 Mourners pray next to coffins of victims of the blast at the Coptic Christian Saint Mark’s church in Alexandria the previous day during a funeral procession at the Monastery of Marmina in the city of Borg El-Arab, east of Alexandria on April 10, 2017.
Egypt prepared to impose a state of emergency after jihadist bombings killed dozens at two churches in the deadliest attacks in recent memory on the country’s Coptic Christian minority. AFP PHOTO

The Department of Foreign Affairs (DFA) on Wednesday denounced the bombing of churches in Egypt that has killed at least 44 people last Sunday.

“The Philippines strongly condemns the terrorist attacks on April 09, 2017 against the Coptic churches in Tanta and Alexandria in Egypt, coming as they did on Palm Sunday,” the DFA said in a statement.

It said “such heinous acts of violence have no place in today’s world.”

The Islamic State claimed that it was behind the bombing of two Egyptian churches that also wounded around a hundred people.

“We condole with the Egyptian Government and the families of the victims and continue to stand with Egypt and the international community in the fight against terrorism,” the DFA said.

The Saint George Church and the Saint Mark’s Cathedral are under the Coptic Orthodox Church of Alexandria, which is among the oldest and largest Christian Church in the Middle East.

Pope Francis earlier decried the bombings and expressed sympathies to his counterpart Pope Tawadros II, who had escaped the bombing in Saint Mark’s Cathedral. IDL