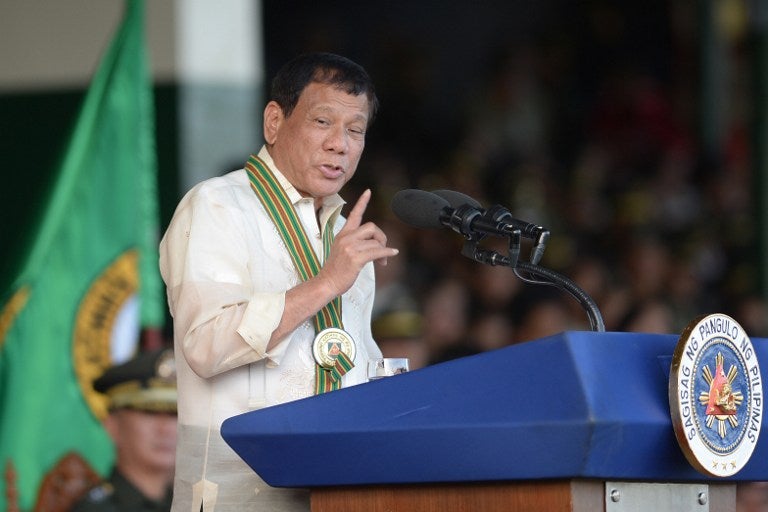 This photo taken on April 4, 2017, shows President Rodrigo Duterte gesturing as he delivers his speech during the 120th anniversary ceremony of the Army at Fort Bonifacio in Taguig City. AFP

Filipino organizations in the Gulf kingdom, which still hosts almost 800,000 workers from the Southeast Asian nation, said the unpaid wages will be on the agenda when they meet Duterte during his two-day Riyadh stop.

The issue is included in a petition which Saudi-based Filipino workers plan to present Duterte on Wednesday, said Florante Catanus, vice-president of the All Filipino Community and Sports Commission, an umbrella group.

A drop in global oil prices by about half since 2014 created a Saudi budget deficit of $79 billion last year, with billions owed by the government to private firms it had contracted, chiefly in the construction sector.

“So many Filipinos were laid off. So they were sent home and they were not able to get money” the companies owed them, said Catanus, whose group is based in Eastern Province.

He said more than 5,000 workers were repatriated and are still owed back wages.

Saudi officials have taken legal action on behalf of the unpaid employees from the Philippines and other Asian countries in an effort to recover their wages, even if the workers have returned to their homelands.

“They’re still waiting for their money,” said Resty Sibug, commander of the Riyadh chapter of the Knights of Rizal, a community organization.

He said some of those repatriated have demonstrated in the Philippines to push their case, which is expected to come up when his and other community groups meet Duterte on Tuesday.

Duterte’s Gulf tour will also take him to Bahrain and Qatar, home to more than 300,000 other Filipino workers.

“He will discuss with these leaders matters relevant to the welfare and dignity of the Filipinos living in their countries, as well as explore avenues of economic and political cooperation,” Quintana told reporters ahead of Duterte’s mission.

Gulf-based Filipinos, employed in a wide range of occupations from management to trades work and waiting on tables, are among 10 million of their countrymen working overseas for salaries they cannot get at home.

The money they remit is a major pillar of the Philippine economy. CBB