Issue for Duterte to tackle: 10 Filipinos are on Saudi death row 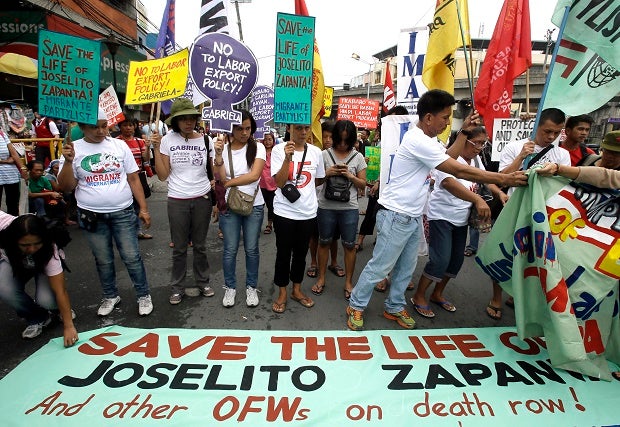 In this Tuesday, Nov. 13, 2015 file photo, protesters display placards during a rally near the Presidential Palace in Manila, Philippines to call on the Philippine government to intercede to stay the scheduled execution of convicted overseas Filipino worker, Joselito Zapanta, and all other OFWs on death row in the Middle East. Saudi Arabia carried out at least 157 executions in 2015.  Zapanta was executed on Dec. 29, 2015. AP File Photo

RIYADH, Saudi Arabia – Ten Filipinos are now on death row in various jails here after they had been convicted of various major offenses, according to figures released by the Philippine Embassy.

The seven men and the three women on death row, who were convicted of crimes punishable with death, are among a total of 31 Filipinos criminally charged in Saudi Arabia for allegedly committing such serious crimes as murder.

The Philippine Embassy said  the 10 Filipinos failed to settle private rights or blood-money payments but there has been no immediate information if their execution would be carried out anytime soon or if the appeal has been going on.

Eight of the 31 accused of committing crimes punishable with death are currently facing trial by courts here that were notorious for handing down guilty verdicts not only on foreigners but on Arabs as well.

It is not immediately known if President Rodrigo Duterte, who will be meeting with Saudi Arabia King Salman bin Abdulaziz al-Saud on Tuesday, will attempt to ask for consideration or would be able to secure one, especially in the case of one Filipino who had been charged in connection with illegal drugs.

Even Saudi Arabia’s own, Prince Turki bin Saud al-Kabir, known to be an inner adviser to the king, Abdulaziz, did not get mercy for shooting a man during a traffic brawl in 2012 and was beheaded in October 2016.

Such was Saudi Arabia’s justice system, based on qisas – the act of retribution – that being spared from the gallows was seemingly not possible.

The Philippine Embassy said it has provided lawyers to at least 15 of those charged here. There are separate lawyers for those charged in Jeddah, who face such charges as murder and illegal drugs.

There were varied reasons why Filipinos ended up being charged with murders in Sharia courts in Saudi Arabia, including maltreatment, physical abuse, sexual advances by employers and others, Embassy data showed.

The Philippine Embassy meanwhile said that there were also other issues facing overseas Filipino workers (OFWs) such as being “forced to work beyond agreed working hours and not given rest days.”

There are also massive reports of delayed payment of salaries and non-payment of benefits by employers, aside from poor accommodation facilities and “lack of proper food.”

It said that OFWs were also prone to abuses with the visa sponsorship system, especially when they exit or secure transfer sponsorship.

There is also the problem hounding some 11,200 Filipinos, who have illegally entered the Kingdom.

They form part of the 399,054 Filipinos in Saudi Arabia  working in various companies and families, providing such services as health and household care and manual labor.  SFM/rga