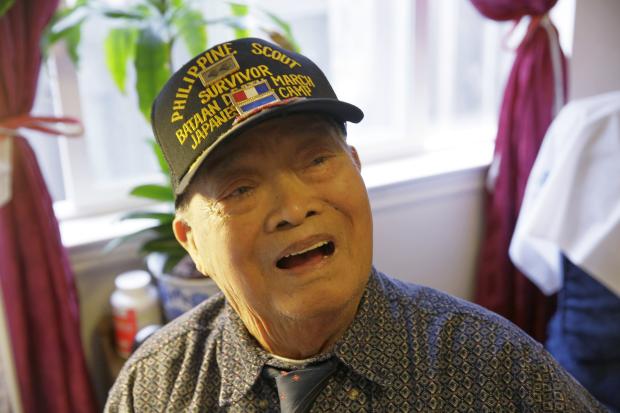 In this photo, taken Thursday, April 6, 2017, Bataan Death March survivor Ramon Regalado reminisces at his home in El Cerrito, California. Survivors of the infamous Bataan Death March in the Philippines are marking the anniversary in San Francisco with speeches and a 21-gun battery salute for the thousands who died during the march. Among the speakers will be Regalado, a former wartime machine-gun operator who turns 100 this month and is among the war’s few living survivors. (Photo by ERIC RISBERG / AP)

SAN FRANCISCO — Ramon Regalado was starving and sick with malaria when he slipped away from his Japanese captors during the infamous 1942 Bataan Death March in the Philippines, escaping a brutal trudge through steamy jungle that killed hundreds of Americans and thousands of Filipinos who fought for the US during World War II.

On Saturday, the former wartime machine-gun operator will join a dwindling band of veterans of the war in San Francisco’s Presidio to honor the soldiers who died on the march and those who made it to a prisoner of war camp only to die there.

They’ll also commemorate the mostly Filipino soldiers who held off Japanese forces in the Philippines for three months without supplies of food or ammunition before a US Army major surrendered 75,000 troops to Japan on April 9, 1942.

Few Americans are aware of the Filipinos who were starving as they relentlessly fended off the more powerful and well-supplied Japanese forces, said Cecilia Gaerlan, executive director of the Berkeley, California-based Bataan Legacy Historical Society organizing the event at the former military fort.

“Despite fighting without any air support and without any reinforcement, they disrupted the timetable of the Imperial Japanese army,” she said. “That was their major role, to perform a delaying action. And they did that beyond expectations.”

More than 250,000 Filipino soldiers served in World War II, when the Philippines was a US territory. But after the war ended, President Harry Truman signed laws that stripped away promises of benefits and citizenship for Filipino veterans.

Only recently have they won back some concessions and acknowledgment, including the nation’s highest civilian honor, the Congressional Gold Medal. The veterans also received lump-sum payments as part of the 2009 stimulus law.

An estimated 18,000 Filipino veterans of World War II are still alive and living in the US.

Tens of thousands of Filipino and US troops were forced on the 105-kilometer (65-mile) march and Gaerlan said as many as 650 Americans and 10,000 Filipinos died in stifling heat and at the hands of Japanese soldiers who shot, bayoneted or beat soldiers who fell or stopped for water. 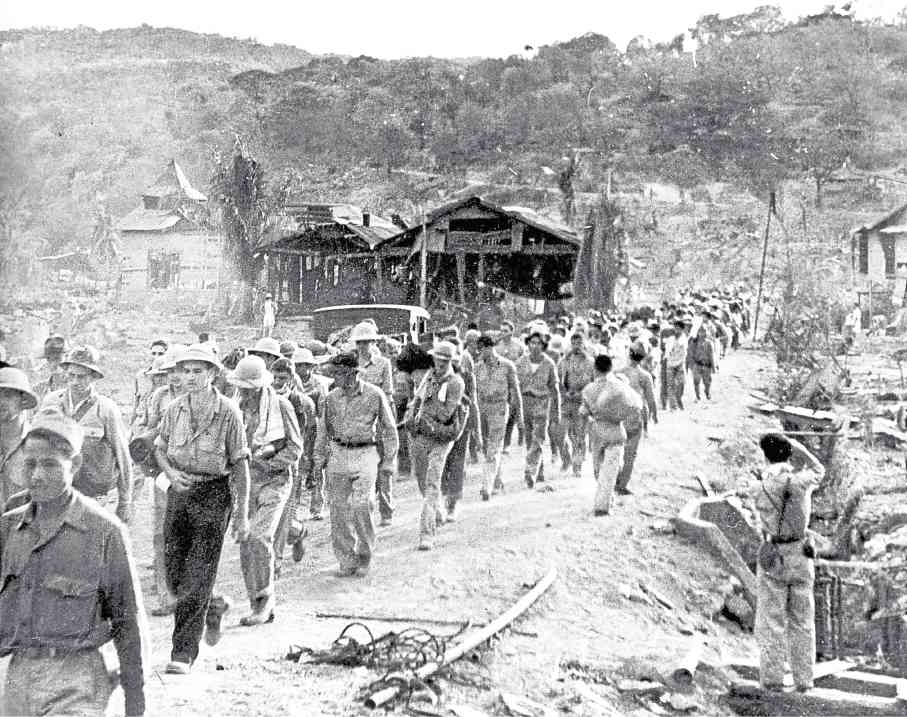 Filipino and American soldiers in the infamous Bataan DeathMarch —AP

More than 80 percent of those forced on the march were Filipino.

After they arrived at a prison camp set up at Camp O’Donnell, she said, an additional 1,600 Americans and 20,000 Filipinos died from dysentery, starvation and disease.

Gaerlan grew up knowing that her father, Luis Gaerlan, Jr., had been in a wartime march in which a lot of people had died. But he rarely spoke about it or he would re-enact it with rat-a-tat-tat sound effects for the guns that made her laugh.

She started researching the march in 2011 and tried to elicit more details from her father. He broke down crying telling her that some men were so desperate that they killed themselves. Others wrote goodbye letters to their relatives during the march.

“And he said he was starting to write his farewell letter, because a lot of men did that, and I asked him, ’Well, were you going to take your own life?” she said. “And he didn’t answer.”

She successfully lobbied California last year to mandate teaching details of the battle and march in high schools.

She also collects march veterans’ stories before they die, including the memories of 99-year-old Regalado, who lives in the San Francisco suburb of El Cerrito.

When the war broke out, Regalado was a member of the Philippine Scouts, a military branch of the US Army for Filipino soldiers.

He and two other soldiers were assigned to feed horses during the march and slipped away when guards were not watching them, Regalado said.

A farmer took in the three, even though the penalty for doing so was death. All were sick with malaria. Only Regalado survived.

He went on to join a guerrilla resistance movement against the Japanese and moved in 1950 to the San Francisco Bay Area to work for the U.S. military.

Regalado credits his survival and long life to his high morale.

While being cared for by the farmer, he recalls telling himself: “I’m not going to die.”

Read Next
Lorenzana: China shouldn’t be bothered by Duterte order
EDITORS' PICK
‘Justice will be done,’ Duterte assures as he vowed probe on Jolo incident to bare ‘truth’
EuroMillions Superdraw: A lottery draw unlike any other is coming to the Philippines
Current dominant strain of COVID-19 more infectious than original—study
DOLE: Return of OFWs’ remains from Saudi to be ‘delayed,’ deadline moved to ‘early next week’
Smart releases Hyun Bin’s second TVC
Water remains our saving grace right now
MOST READ
BREAKING: Duterte signs anti-terror bill into law
Duterte tells military: No other president looked at you the way I did
Locsin warns of ‘severest response’ if China’s army drills in SCS ‘spill over’ to PH domain
Vico: Cleanup of bidding process saved Pasig gov’t P415M
Don't miss out on the latest news and information.