Benevolent dictators vs emerging leaders: The ‘bipolarity’ of PH leadership 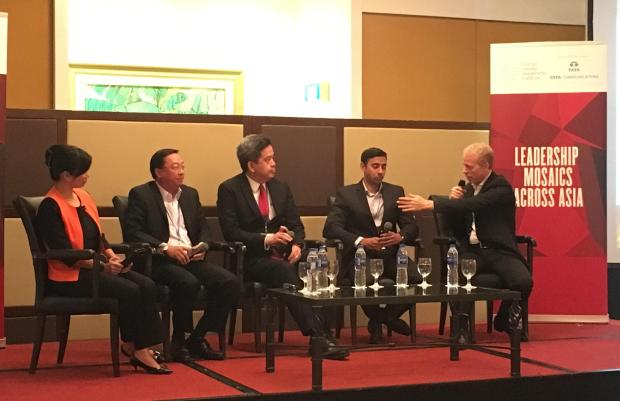 The leadership style in the Philippines, whether in businesses or politics, has always been “bipolar.”

There are leaders who adopt an autocratic style and there are those new emerging ones who are more globally exposed and focus on performance and meritocracy.

But moving forward in the age of globalization, the signs are pointing to a shift to the latter. The challenge now is how to embrace this transformation without running against ingrained national values.

This is the central theme of the study “Leadership Mosaics Across Asia” by Singapore’s national center of excellence Human Capital Leadership Institute (HCLI), which looked into patters and nuances in leadership characteristics in the region after an in-depth conversation with 165 C-level executives from nine Asian countries.

“Let’s face it: There are some benevolent dictators as on offshoot of the fact that we had feudal entities at one point of our history, at one end of the spectrum,” he said. “On the other side, there are those who integrated the Filipino and Western approaches quite seamlessly.”

The study notes that Filipino leaders have been “fairly adaptable to socio-cultural norms and business approaches” as a result of a history and culture that have been open to external influences.

But the study says these very same characteristics that make Filipino leaders globally mobile and good collaborators could also hinder the growth of emerging leaders.

“Adherence to core values of Filipino culture such as pakikisama and bayanihan, can cause some leaders to come across as having a lack of assertiveness – an important trait for a global leader dealing with Anglo-Saxon archetypes,” the HCLI said. “This is also a roadblock faced by some senior leaders who would like to cultivate a more performance-driven culture in their organizations. Any leader that seeks to drive organizational transformation, must therefore reconcile their change initiatives with these values for them to be successful and sustainable.”

But for Nishant D’Souza, founder and managing director of agribusiness company Cardinal Agri, aiming for a successful leadership in an evolving global stage need not involve sacrificing national values.

“It boils down to approach,” he said. “In terms of trend, there is an increasing trend of willingness to embrace Western concepts and approach. The challenge for Filipino companies blending corporate and national values is providing an ecosystem within the company for talent to succeed.”

While Asia is regarded as a diverse region, the findings also point to common patterns of leadership styles in the continent, such as leaders highlighting relationships and connections as a way of “getting things done” in business and political spheres.

The study says this could be attributed to the “cultural values that emphasize familial ties and social strata, or distrust in the rule of law.”

“In drawing out the portrait of business leadership for Asia, one also inevitably runs into a discourse on power,” the study says. “While ‘respecting the order’ comes out as a strong trait in China and Japan, a ‘hierarchy-conscious society where older employees address the person before the issue,’ and not the issue at large, is a key trend noticed in India. Across Southeast Asia, words such as ‘paternalistic,’ ‘hierarchical,’ ‘autocratic’ and ‘feudalistic’ resound when leaders, both native and foreign, were asked to describe the ways of leadership in Indonesia, Malaysia, Thailand, the Philippines and Vietnam.”

“Leaders from Singapore and Japan sit at the ‘logic’ end of the scale and excel in process thinking, while leaders from India thrive on improvising solutions in environments of uncertainty and chaos,” the study says. “There seems to be a direct correlation between these traits and the maturity of the existing infrastructure in each market. Leaders from other regions researched fall at various points on the scale.”

Aside from the Philippines, other countries surveyed were China, India, Indonesia, Japan, Malaysia, Singapore, Thailand and Vietnam.

Moving forward, HCLI says leaders coming out of the Philippines “share similar global leadership traits” and “are well positioned to lead across borders” beyond the country.

All they need, the study adds, is a “boost of confidence, assertiveness, and sponsorship by senior management to make their mark on the globe.”

The full Philippines Mosaics report can be requested for download from leadershipmosaics.asia.

“Leadership has to be flexible and versatile,” Segismundo said. “It’s about passion and motivation to get things done, and by that you become an effective leader.”

“It’s a rapidly changing environment,” he added. “Who would have imagined that Donald Trump would become president, that Brexit would happen, and 15 months ago we never imagined that President Duterte would be our president. A lot of black swan events happening, and I think the job of HR is to be able to respond to all those black swan events and at the same time navigate successfully and stay on top, and it involves two things – healthy dissatisfaction with the status quo and being able to respond effectively to all the changes that are rapidly happening.” /atm