US to continue giving PH aid despite Duterte tirades 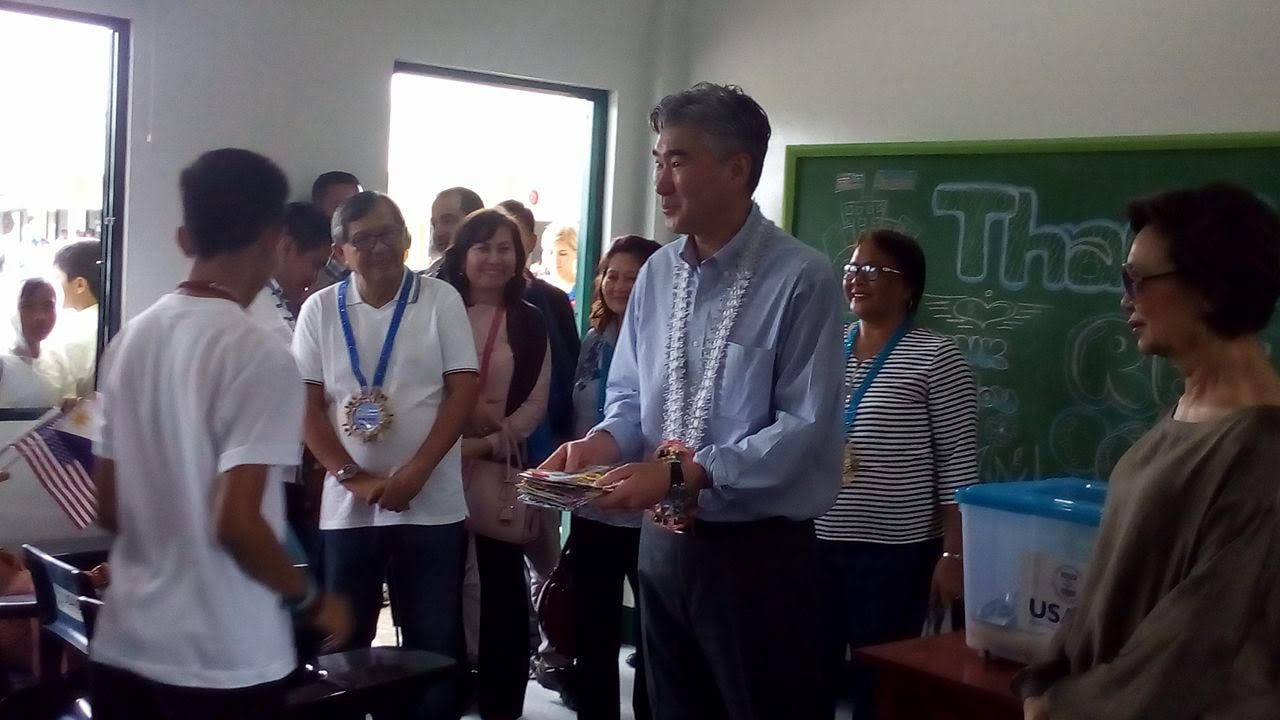 US Ambassador to the Philippines Sung Kim accepts letters of gratitude from the students of the Anahawan National High School for the six classrooms donated by the US government as part of its assistance to Leyte in the aftermath of Super typhoon ‘Yolanda’(international name: Haiyan) in 2013. (PHOTO BY JOEY GABIETA / INQUIRER VISAYAS)

TACLOBAN CITY, Leyte — The United States government will continue to extend assistance to the Philippines despite the scathing attacks of President Duterte against the superpower.

“We will not change ever. We will continue to be your friend and supporter,” US Ambassador to the Philippines Sung Kim said on Tuesday (Apr. 4).

He added that the alliance between the two countries has always been deep and would remain strong “in the years and decades to come.”

Kim was in Tacloban City and the nearby town of Palo on Tuesday afternoon to turn over a training center and classrooms as part of the US government’s assistance to Leyte in the aftermath of the massive destruction caused by Supertyphoon ‘Yolanda’(international name: Haiyan) in 2013.

“The US and the Philippines have a close partnership, very close friendship and very strong alliance for many, many years. In fact, the US- Philippines alliance is the longest alliance we have in the whole Pacific Region,” Kim said during a brief interview on Tuesday afternoon.

He said the presence of 4 million Filipinos living or working in the US and about 300,000 Americans staying in the Philippines has demonstrated “the depth of our ties.”

“We have the deepest possible friendship between the people of two countries… That is why, we want to make sure that we maintain our strong military partnership and our economic engagement…and the most important (of all), we wanna make sure the foundation of people to people ties, our deep friendship between the Americans and Filipinos will continue years and decades to come,” the US ambassador added.

The relations between the two countries appeared to have soured under the administration of President Rodrigo Duterte who lambasted the US in late 2016 after then outgoing US President Barack Obama criticized his intensified war on illegal drugs that resulted in the deaths of at least 7,000 drug users and pushers.

Kim assured the Philippine government and its people that his country and people would continue to provide assistance just like what they did when the country, particularly Eastern Visayas, was pummeled by Yolanda.

The US government provided $143 million or around P7 billion to the country in the aftermath of Yolanda.

US assistance included the construction of more than 300 schoolrooms, 237 of which are in different towns in Leyte and 27 others in Tacloban City, considered the ground zero of the world’s strongest typhoon to hit inland.

On Tuesday, Kim turned over six classrooms to the Anahaway National High School (ANHS) and three classrooms for Anahaway Elementary School (AES), both in Barangay Anahaway, Palo town, benefitting 860 students in all.

“I am happy that his government helped us during our time of difficulties. And I am also happy that for the first time, our school was visited by a high American official,” said Joan Andriano, 16, and a Grade 10 student of the ANHS.

The US ambassador also turned over the two-story training center worth P10 million inside the Tacloban City Hall compound, which could also be used as an evacuation center.  SFM