Duterte to ask Putin for tips on staying single and happy 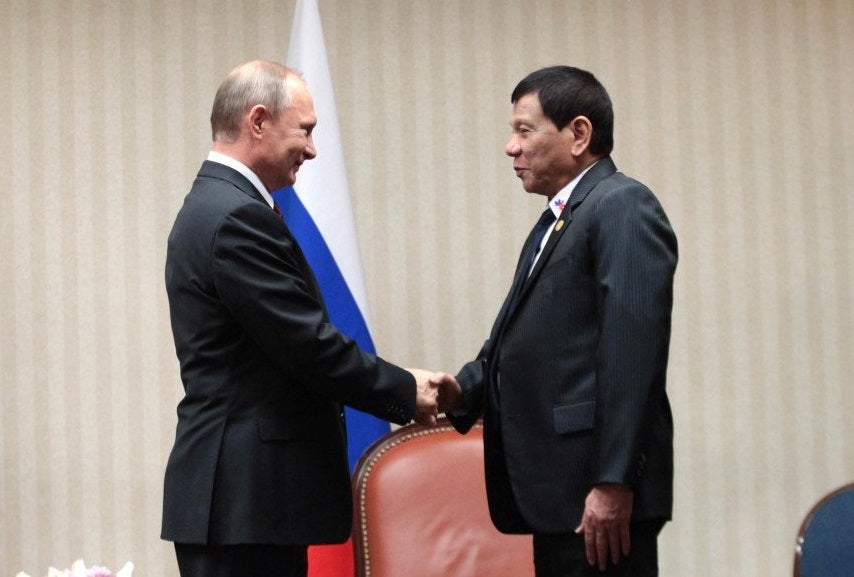 When he sees Russian President Vladimir Putin next month, President Duterte has a question for him that has nothing to do with global politics.

“How do you stay single and be happy all the time, Mr. Putin? I’d like to ask him that question. Give me the secret,” Mr. Duterte said in a speech at the Metro Manila Development Authority.

Putin is divorced from his wife of 30 years, Lyudmila. He is rumored to have a girlfriend.

Mr. Duterte, who likes to joke about having more than one woman in his life, had his marriage to the mother of his three children annulled, and has a partner with whom he has one daughter.

Also Tuesday, Mr. Duterte defended Speaker Pantaleon Alvarez amid the controversy stemming from his admission that he has a girlfriend.

He said Alvarez, who is estranged from his wife, was not a Catholic.

“Do you know, Speaker Alvarez is not a Catholic? He is just like me, his grandfather, Chinese, his mother is a Calagan Muslim, the Muslims of Davao,” he said.

“Bebot is smart. Even if he has five, four [women], there’s nothing we can do; he never converted to Christianity. So he is not bound by the rules of the number of women you can have,” he added.

He noted that Alvarez is being threatened with disbarment for admitting to having a girlfriend.

“This is a world of hypocrisy. Who here has no women?” he said.

He also said those being accused of womanizing can just claim to be atheists.

“The Judeo-Christian is one wife, but if you are an atheist, you can have as much as you want as long as you are able to support the children,” he said.

He also wondered about the fuss over having several wives.

“Why do you have to bother about how many wives? It’s a chauvinist statement but really, there are so many women and so short a time in this world,” he said.