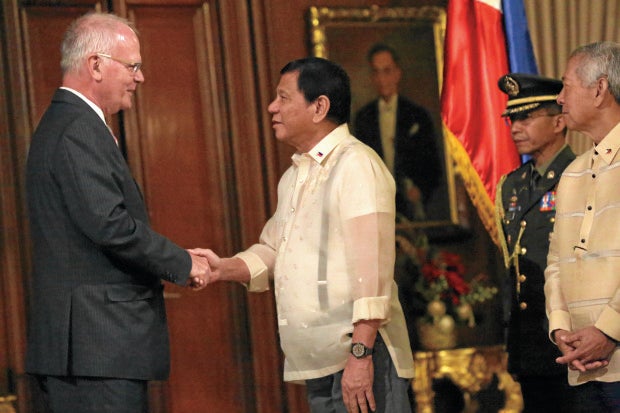 European Union envoy to the Philippines Franz Jessen is welcomed by President Duterte during the New Year vin d’honneur in Malacañang Palace on Jan. 11. Amid another angry outburst by the President, Jessen urged both parties to “treat each other with mutual respect that each side deserves.” —JOAN BONDOC

Trade with Europe would be affected if the Philippines continued to ignore warnings on human rights violations, including its bloody war on illegal drugs that has led to thousands of deaths blamed on the police and vigilantes, the European Union’s envoy to Manila Franz Jessen has warned.

Jessen told a select group of reporters on Friday that Europe was not imposing United  Nations conventions on the country, but was expecting it to abide by its international commitments.

“So it’s not 27 conventions we are imposing on you. It’s 27 conventions that you already signed up for in the UN system. So it’s not us imposing anything. We are simply saying you did that (ratified UN conventions) and we think you did right and therefore we are very  happy to work with GSP+ (Generalized Scheme of Preferences) in the Philippines,” he said.

Respect for international commitments remains a requirement in landing a free trade agreement with the European Union as well as continuing the EU’s GSP+. A European mission recently concluded an assessment and follow-up on the Philippines in January and February. A report is expected at the end of the year.

“We are monitoring the respect of these (UN) conventions by the Philippines and we will carefully consider what implications the findings might have for our trade engagement with the Filipinos,” he said.

Jessen’s statement came on the same day that President Duterte cursed the European Union as a “son of a whore” and “crazy” for believing claims made by rights groups that he had personally ordered the deaths of drug suspects.

He repeated his earlier claim that the European Union also suggested that he build a clinic that would dispense meth, heroin and cocaine.

“I said, ‘Come here and we’ll talk because I want to slap you,” Mr. Duterte said he told the European Union.  His comments were made Friday at a Women’s Day gathering in Malacañang.

But Mr. Duterte again did not say when the European Union made the remark.

Jessen on Friday said he checked with EU member states represented in Manila and “nobody suggested anything like it was stated.”

“Whatever we do in this country is by definition in accordance with domestic law,” he said, adding that it was “simply not correct” to say that a representative of an EU country would have made any suggestion that was against local laws.

He said presidential spokesperson Ernesto Abella had clarified that Mr. Duterte was not addressing the entire European Union but was referring to one of its 28 member-states.

Jessen said the European Union was nevertheless committed to “engage constructively” with Manila across a range of areas, from the health sector and law enforcement to the peace process, environment, disaster risk reduction and development specifically in Mindanao.

GSP+ has resulted in the reduction of tariff on 6,200 Philippine products to zero and helped the Philippines corner 17.5 percent in exports to the European Union worth $900 million in January. Of this total, $225 million were exported under the GSP+ program.

The European Union had previously stopped preferential treatment for Sri Lankan imports due its failure to address reported human rights violations there. It only qualified in 2015 when the country’s new government carried out major reforms for national reconciliation there.

Jessen said that all GSP+ beneficiary countries were working to promote 27 UN conventions and were making steady progress.

He said that the European Union has a “tradition of being very frank and open” in discussions. He said the bloc considers the Philippines one of its longest diplomatic partners the past 53 years.

Jessen pointed out that when the European External Action Service summoned the Philippine chargé d’affaires Alan Deniega to Brussels to explain Mr. Duterte’s earlier outbursts, it only wanted to stress that both should “treat each other with mutual respect that each side deserves.”

But Jessen assured that EU assistance would remain, including a grant of P17 billion for various projects. Negotiations for a free trade agreement between both sides have been going on since last year.

Sen. Leila de Lima, Mr. Duterte’s top critic that has been jailed on what she claims are trumped up charges of profiting from the drug trade, said the European Union was beyond being threatened and “know a case of political persecution when they see one.”

“They know the truth, Mr. President. They don’t buy your lies about me. So do a silent majority of your people,” De Lima said from detention.

She was reacting to reports that EU parliamentarians issued a statement calling for her release.

But Jessen said the European Parliament does not represent the EU government.