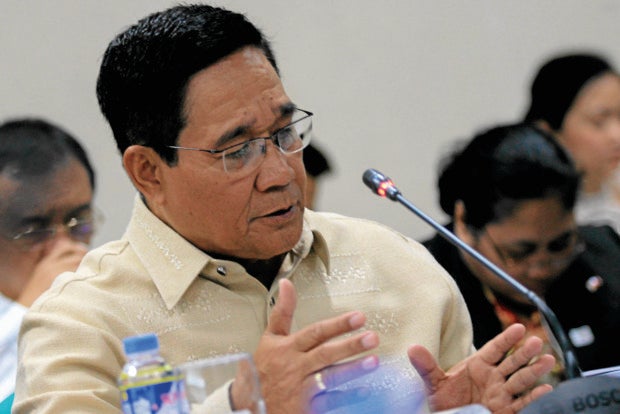 “What is harmful about having a research ship there?”

National Security Adviser Hermogenes Esperon posed the question to reporters on Wednesday, defending the government’s decision to allow China to send ships to Benham Rise, a resource-rich submerged landmass off the eastern coast of the Philippines.

Esperon, a former military chief of staff, attended a hearing called by the Senate on a bill establishing a body that would manage the development of Benham Rise.

The hearing also focused on the presence of a Chinese survey vessel on Benham Rise that authorities monitored from November 2016 to January this year.

President Duterte has admitted he allowed China to send ships to the 24-million hectare Benham Rise, which the United Nations has declared part of the Philippines’ continental shelf.

Mr. Duterte’s admission stirred a controversy, with Sen. Antonio Trillanes IV saying the President had committed an impeachable offense and Magdalo Rep. Gary Alejano actually filing an impeachment complaint in the House of Representatives  against the Chief Executive.

Esperon told the Senate commitees on economic affairs and finance that Mr. Duterte had invited countries to send their ships to the Philippines.

He said the Department of Foreign Affairs (DFA) was the authorized to allow entry of foreign vessels wanting to conduct marine research in the country’s territorial waters and exclusive economic zones.

“It has to be government to government… [But] the exercise of giving permits could be exercised by the President whether its done verbal or not,” Esperon said.

He said the Chinese vessel monitored on Benham Rise conducted “biological and hydrographic surveys but we have no indication it was surveying what’s on the seabed as of now.”

Asked by Sen. Sherwin Gatchalian, the economic affairs committee chair, about Defense Secretary Delfin Lorenzana’s statement that the Chinese vessel stayed for three months in the area and moved around, making him believe its presence was not innocent passage, Esperon said: “That’s right. Three months lingering in the area is not really simply innocent passage or freedom of navigation.”

“Research was conducted but it could not be established where it was conducted—whether it was outside the EEZ or not because [the vessel] went down ultimately,” he said.

Esperon said the Chinese vessel’s presence could have been a “potential breach,” but quickly added “it being a research ship, which did not conduct any sonar research on the seabed, I would not put it [on] the security fence but rather on the economic side of things.”

Asked whether the Chinese survey vessel applied to the DFA for a maritime scientific research permit, Ma. Lourdes Montero, acting executive director and officer in charge of the DFA Maritime and Ocean Affairs Office, said she was not sure whether the vessel was covered by past applications.

Montero said the DFA denied China’s applications for permits for maritime scientific research on the Benham Rise in 2015 and 2016 because Filipino scientists had no role in the activity.

Asked by Gatchalian if the Chinese vessel’s presence on Benham Rise was a breach of protocol, Montero replied that  she could not say, because the DFA had no complete details “on the coordinates and what the vessel was doing there.”

Montero said the DFA sent a note verbale to China over the incident and that Beijing had made statements that it was exercising freedom of navigation.

Esperon told reporters after the hearing that research ships should seek permission from the DFA, although “there is already a general invitation from the President.”

He declined to say whether there was breach of protocol, asking, “What is harmful about having a research ship there?”

“In fact we should be joining them,” Esperon added.

He said there were discussions to “perfect” the process of applying for maritime scientific research in the country.

“The idea is not to exclude any country there in our EEZ (exclusive economic zone) because after all, fisheries for one should be enjoyed by mankind and fish can move inside or outside EEZ,” he said.

After the hearing, Gatchalian told reporters it was “inconclusive” whether there was a breach of protocol since Manila and Beijing were still in discussion of the Philippine note verbale.

“From my understanding, [China was] allowed to go to the Philippines, but they also have to go through a special process. Now the policy and process must be synchronized,” he said.