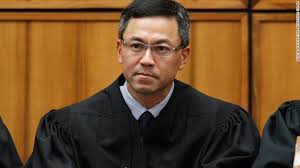 Not the Donald, though maybe that will come in time, sooner than we think.

The Trump fail on health care is epic. It is, as they say, a defining moment of what is still a nascent presidency.

It is how Trump does business. And lo and behold, it doesn’t work in government.

We shouldn’t kid ourselves any longer. Trump is ill-equipped and unable to do the job as leader of the free world.

He’s still an arrogant bully, with henchmen. But that kind of thing doesn’t stand a chance in a functioning democracy.

The president sought to take away health care from 24 million people and couldn’t get the deal done. The man who prides himself on being the master negotiator couldn’t get the majority of Congress to commit what I call “medically-assisted political suicide.”

In the end, even the president had to realize it was better to cut his losses and pull the bill before a vote.

Immediately, he started to blame the Democrats. But for what?

For making sure that millions stay insured with essential health care they need?

“Let Obamacare explode,” Trump said from the White House after the aborted vote.

Fact is, Obamacare is not exploding.

No doubt there are problems with ACA, but mostly it’s due to the insurance and drug companies that want to assure profitability rather than people’s health. That’s one area that needs fixing. Under a more universal broad pool, with the largest possible number of insureds who can spread the risks of health care, Obamacare would work better.  That would be an emulation of Medicare, a single-payer plan. That’s the answer to many of the problems with ACA.

Republicans don’t like to admit that Obamacare was a compromise to begin with. And now it’s working like a compromise, with some people upset, and many happy they finally have some coverage.

But how do you control costs? Or streamline it?

The replacement, Trumpcare, wouldn’t have done any of that.

It’s a costly lesson for Trump who is learning that you can’t run the country like a business.

Profit and dollars aren’t everything. You have to care about the people.

Trump’s other recent major setback (and mind you, I’m not even going to get into Trump’s  lies about Obama), is the travel ban.

I must admit, I wasn’t sure if Islamophobia was going to be beaten back and stopped this time around.

But a Native Hawaiian judge in the nation’s most Asian American state has spoken for all. Maryland piled on for good measure after the Hawaii court’s decision. But the effect is the same.

Trump’s revised travel ban is dead until Trump can revive it with some legal mouth-to-mouth. (Now there’s an image for you.)

When Trump signed travel ban 2.0 as Executive Order 13780 on March 6, it appeared to be sanitized from most of the obviously unconstitutional elements that were in the first travel ban stymied by the courts.

It even had provisions to allow for certain business and family travel. The possibility of waivers for some people was written into the order.

And yet, it was still a ban on six majority-Muslim nations that appeared to be religious discrimination, a violation of the First Amendment’s Establishment Clause.

The government lawyers tried to make it all smell legal enough.

Turns out it wasn’t as fragrant as a Hawaiian plumeria.

With just hours before the travel ban 2.0 was set to take effect, federal judge Derrick Kahala Watson in Honolulu halted it nationwide by issuing a temporary restraining order to the listed plaintiffs: the State of Hawaii and Ismail Elshikh.

You heard a lot about Hawaii, but not much about Elshikh in most of the news reports.

Elshikh was critical to the important issue of standing to file the lawsuit.

Hawaii’s claims were similar to the state of Washington’s in the suit that stalled the first travel ban. Like Washington, Hawaii’s universities would suffer monetary harms, as would the state as a whole–especially its important tourism industry.

But Elshikh was the named human face in this suit.
An American citizen of Egyptian descent and a Hawaii resident for over a decade, Elshikh is the Imam of the Muslim Association of Hawaii and a community leader. He has a wife and five kids, all of them U.S. citizens.

It was his mother-in-law in Syria, who last visited in 2005 and does not have a visa, who propelled his legal standing. The family applied for an I-130 Petition for Alien Relative in September 2015.

On January 31, 2017, Elshikh called the National Visa Center and was told the visa had been put on hold because of the first travel ban. When the second ban was announced, Elshikh feared his mother-in-law would be barred from entry unless she was granted a waiver.

Apparently, the possibility of a waiver in travel ban 2.0 didn’t invalidate his legal claims.

In his decision, the judge ruled that “Dr. Elshikh has standing to assert his claims, including an Establishment Clause violation.”

“[My children] are deeply affected by the knowledge that the United States–their own country–would discriminate against individuals who are of the same ethnicity as them, including members of their own family, and who hold the same religious beliefs,” Elshikh is quoted in the decision. “They do not fully understand why this is happening, but they feel hurt, confused, sad.”

Sad. That’s a word Trump likes to use in tweets.

If Trump reads the decision, he may be sad to see his own words used against him. Like when he referred during the campaign to a “Muslim ban” and said it had “morphed into an extreme vetting.” Or how a press release stated unequivocally: “Donald J. Trump is calling for a total and complete shutdown of Muslims entering the United States.”

At a rally in Nashville, Trump was dismayed that even what he called the “watered-down version” of his travel ban had failed. He called the judge’s decision an example of “judicial overreach.”

But the court’s rejection of the executive order is all about Trump’s “executive overreach.”

On the Establishment Clause issue, the judge cited the government’s claim that the executive order was not religiously motivated because “the six countries represent only a small fraction of the world’s 50 Muslim-majority nations… and covers every national of those countries, including millions of non-Muslim individuals.”

Judge Watson saw through the ruse: “The illogic of the Government’s contentions is palpable. The notion that one can demonstrate animus toward any group of people only by targeting all of them at once is fundamentally flawed.”

It exposed Trump’s strained attempt to justify his xenophobic overreach.
But it took the State of Hawaii and Ismail Elshikh to be brave enough to stand up to it–for all of us.

That’s the way it still works in a strong democracy energized by the people, and not by an orange-haired bully.

Emil Guillermo is an award-winning journalist and commentator who writes from Northern California. Listen to his podcast on iTunes.  Reach him at http://www.twitter.com/emilamok