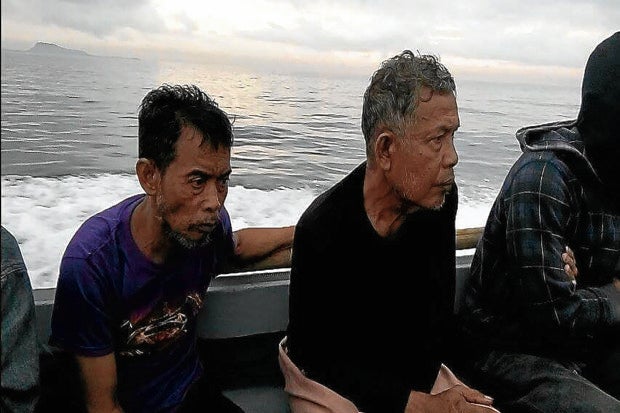 FINALLY, FREEDOM Malaysians Tayudin Anjut, 45, and Abdurahim Bin Sumas, 62, shown in this photo released by the Armed Forces’ Western Mindanao Command, were freed after eight months in captivity during a “focused military operation” in Sulu.

The military later said the pirates were Abu Sayyaf bandits.

Dagalea said the Coast Guard had dispatched a gunboat to pursue the abductors, who were last reported to be heading for Tuburan town in three speedboats.

Earlier in the day, the military said it had rescued two of the Malaysian tugboat crew held by Abu Sayyaf bandits for almost eight months.

“The rescued kidnap victims are weak and in a sickly state when they were rescued by our troops. Military doctors are now attending to them,” said Galvez, head of the Western Mindanao Command.

He said the military operation was conducted after the Marines got an information that Abu Sayyaf bandits had brought the two captives to Barangay Kudong.

Galvez did not say if a clash took place or if the bandits were forced to abandon the captives.

Anjut and Sumas were among the five crew of Tugboat Serudung 3 who were abducted off Lahad Datu on Sabah by Abu Sayyaf subleader Sibih Pissih.

Those still in the hands of the Abu Sayyaf were Fandy Bakran, 26; Mohamad Jumadil Rahim, 23; and Mohd Ridzuan Ismail, 32.

Galvez said the “continuous pressure through unrelenting combat operations” also led to the surrender of an Abu Sayyaf member in Sulu on Monday, while another bandit was captured by government troops in Basilan on Sunday.

He said Absara Mursalin Akbara, 41, alias Talin Amsang, turned himself in on Monday in Talipao town. He also yielded his  M16.

“Akbara is a member of the ASG Sub-Group under Jihad Susukan, operating in the municipalities of Talipao, Maimbong and Indanan of Sulu province,” Galvez said.

He said Akbara feared he would be the next target of the military operations and yielded.

“He said that he no longer feels safe as communities have been tipping off the sanctuaries and homes of Abu Sayyaf members,” Galvez claimed.

“Nur’s location was reported by a concerned citizen from the same area where he was apprehended,” Galvez said.

He said the military would “continue the pressure and sustain the strategic alliance with our partners in eradicating the ASG menace and terror threats in Central and Western Mindanao.”

“For as long as the community and the local government units are with us in this fight, we will surely accomplish our mission at the soonest possible time. Together we can make things happen,” Galvez added. —WITH A REPORT FROM CYNTHIA D. BALANA IN MANILA