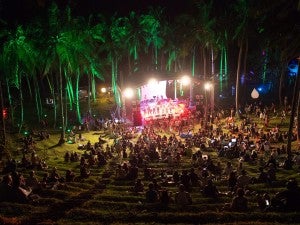 PUERTO GALERA — All boats led to the Malasimbo Music and Arts Festival at Puerto Galera, Philippines where three nights of full moon from March 10-12, and an all-star cast of Filipino and foreign artists, kept the magic of Malasimbo–now on its seventh year–going.

From the ethnic drumbeats of Kawangis ng Tribu summoning party animals to the stage to the soothing sounds of Curtismith, and the surprising rendition of Afro Cuban jazz by Quincy Jones protege Alfredo Rodriguez Trio, it was all worth the wait.

President and festival director Miro Grgic made sure the intermission flow was smooth as he opened each session with eclectic mixing while three-time guest funk artist Peter Golikov played live DJ between set changes. In an open air, grassy amphitheatre, logistics posed a challenge to switching band equipment, but Malasimbo enthusiasts enjoyed the intermissions and dance party in between.

The very soul of the party wowed the audience during the second night’s performance with original Pinoy reggae culminating in traditional reggae everyone could sing together to. Whisking us all to the heart and soul of island music, the effortless dance moves of Jordan Rakei kept everybody on their feet, clamoring for more. Reminiscent of the fifth-year Malasimbo star Ky-Mani Marley, no one wanted the magic to end.

As if the music was not enough, the nearby Mangyan Village offered a Silent Disco where bodies gyrated and hands bounced in the air in a seemingly imagined disco beat heard only through headsets. This is a revolutionary alternative to enjoying dance moves minus the loud sound. Wittingly, the sound explosion did not compete with the main stage. 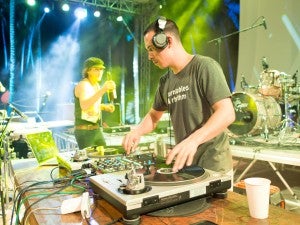 Still at the Mangyan Village, D’Aboville Foundation presented several speakers that spoke about a variety of projects, including the conservation of the endangered Tamaraw found only in the province and the preservation of the culture and livelihood of Mangyan tribes while providing them with healthy water supply. The Hinunuon Tribe sold its delicately embroidered tops, along with crafts and basketware.

Puerto Galera still has not been widely endorsed as a tourist destination by the Department of Tourism, except when promoting its world-renowned dive sites and marine ecology. Despite the locale earning the honor of having one of the Most Beautiful Bays in the World, the main issue remains to be the lack of transportation to ferry international guests from Manila to the island haven. 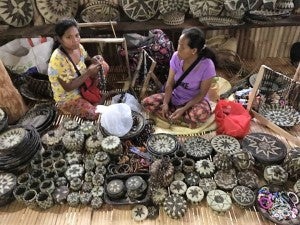 Air Juan offers two flights a day directly from Manila Bay to Boquete Island bordering Elizabeth Hideaway and American standard The Manor Hotel. The cost to board the 35-minute seaplane is approximately USD $100 each way, but the plane sits only nine persons. 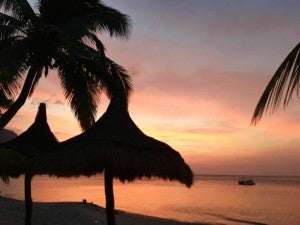 Nothing compares to the exquisite sunset at Tamaraw Beach Resort. INQUIRER/Carol Tanjutco

The usual route to the island is through outrigger boats plying between Batangas Port to Muelle in about an hour for a small cost, or through the superferry that transports cars from Batangas pier to Calapan in approximately two hours, and then road travel from Calapan to Puerto Galera takes another hour.

This notwithstanding, the annual music and art fest attracts thousands of tourists during the three-day event. Puerto Galera is ready to embrace more tourists in any given day. Numerous hotels offer a view of the magnificent sunset, but one that stands out is that of the family-owned convention-type of facility, Tamaraw Beach Resort. This private property is neighbor to the exclusive Zobel de Ayala estate.