DAVAO CITY – President Duterte said Chinese vessels sailing near disputed waters off the Philippines did not violate the country’s sovereignty, saying ships from other nations would be welcome to dock in Philippine ports.

Mr. Duterte made the statement in reaction to reports the Chinese have been setting up radar and other surveillance installations close to the Panatag Shoal off western Philippines.

“We can not stop China from doing those things. Hindi nga nabawalan ang mga Amerikano (Even the Americans could not stop them),” Duterte said during a press conference here shortly before flying for his state visit to Myanmar.

Mr. Duterte said the Philippines could not risk igniting a war against China on the issue of sovereignty.

He said China and even the United States have been exercising their right of passage to the waters off the country.

“What do you want me to do? Declare war against China? I can but we will all lose,” the President said. 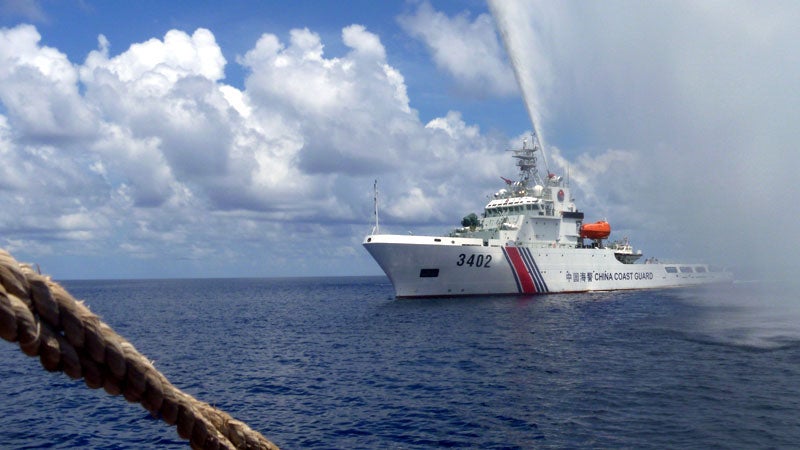 A CHINESE Coast Guard ship approaches Filipino fishermen off Panatag Shoal in the West Philippine Sea in this photo dated Sept. 23, 2015, which was provided by one of the fishermen, Renato Etac. AP

In his talks with Chinese officials, Duterte said he did not invoke the United Nations-backed arbitration ruling from the Permanent Court of Arbitration in The Hague, favoring the Philippines in the West
Philippine issue.

“But there will be time in my term when I will bring the issue back on the table. When? When they will start to tinker with your entitlement,” Mr. Duterte said.

“Your ships are welcome just like Russia’s to come here and dock, and let me see your armaments there. Just do not do anything to my coast guard personnel if they visit your ships,” he added.

The President clarified only coast guard ships can make sail-bys, and not the so-called “gray ships” of the Philippine Navy. He said Chinese vessels spotted near the disputed shoal were those from the Chinese coast guard.

“It was the US that sent gray ships there,” Duterte said.

“Coast guard (ship) does not mean war. Gray ships mean you are in an aggressive form,” the President said.

Mr. Duterte said China could exercise its right of passage to these  area, adding US navy ships have been regularly sailing there.