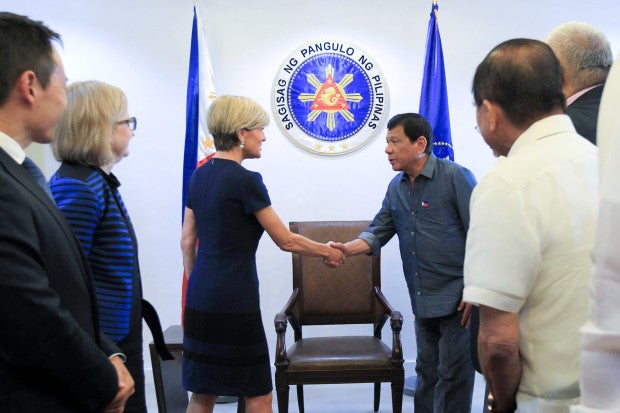 President Rodrigo Duterte, whose administration has maintained a strong stance against illegal and irresponsible mining in the Philippines, is interested in learning responsible mining from Australia, according to presidential spokesperson Ernesto Abella.

Duterte and Australian Foreign Minister Julie Bishop had a “very warm and cordial” meeting at the presidential guest house, during which Bishop said her government would be “willing to cooperate in building capacities” for responsible use of mineral and energy resources.

Abella said the Australian government, concerned about the peace process with Muslim rebels, pledged $40 million over six years to provide aid in conflict-stricken areas in Mindanao.

The financial aid, he said, would go to projects such as improved water facilities.

He said Duterte and Bishop stressed the importance of addressing the threats of terrorism, including piracy at sea. So they would like ensure that maritime areas would safe and secure and allow for freedom of navigation and overflight.

“Both underscored that terrorism and violent extremism are serious threats, with both expressing readiness to identify areas of collaboration,” Abella said.

Australia, he said, also expressed support for the Philippines as 2017 chair of the Association of Southeast Asian Nations (Asean.

According to Abella, the President said the Philippines would “do its utmost for a strengthened Asean and a region that’s peaceful, progressive and prosperous.”

“It sets the tone for a more positive engagement between the two countries as strategic partners,” Abella said. /atm