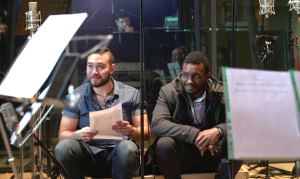 LONDON — On a quiet Tuesday evening in London, over a Skype video conference call to Dubai, I’m discussing life and music with artist Hamza Hawsawi, former winner of “The X Factor Middle East.”

The singer, whose rich, soulful vocals evoke R&B greats of generations past, rocketed into the limelight after becoming a regional singing competition champion in 2015.

Having recorded in London and Dubai so far, Hawsawi is now in the process of putting the finishing touches on his debut album with the expertise of British-Filipino music producer Max Herman.

His first single, “Love A Little,” was recently released on iTunes.

A star is born

Hawsawi, who was born in Jeddah, Saudi Arabia, by the Red Sea, spent his childhood listening to Prince and Michael Jackson, with the latter artist particularly influencing his soulful sound.

“I used to idolize Michael Jackson,” recalls the singer. “My cousins and I would watch him dance and sing. That was my musical base. Then others came along — Marvin Gaye, Boyz II Men, the Backstreet Boys.”

“Saudi culture doesn’t really have music schools and things like that, so singing and my love for music was something that I developed on my own. As I got older, I got into dancing, rapping and singing.” 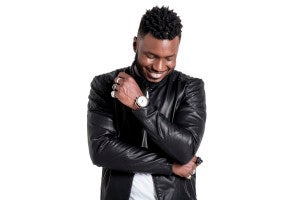 Hamza Hawsawi would like to tour the Philippines and work with Filipino musicians. CONTRIBUTED

Although he had been dancing for a while, it was only in 2008 that Hawsawi sang publicly at a talent show for the first time.

“I wasn’t actually supposed to sing [at the show],” Hawsawi admits, laughing. “I was a backup dancer for the headline act. But one of the organizers overheard me singing during the break, liked what they heard and asked me to fill an empty spot in the line-up. So I said yes, ditched the dancing and became a singer.”

That was the point when Hawsawi started taking his career as a musician more seriously. Although he always had a job or school on the side, it was joining The X Factor at 24 years old when he finally decided to quit his job and follow his passion full time.

His choice to pursue music, however, was no easy ride.

“Being brought up in Saudi Arabia, a very conservative country, I’d never thought about becoming a singer or musician. Culturally, the expectations in a society like ours are just different. You’re expected to be a doctor, or a pilot, an engineer, or an architect, you know what I mean? So this passion, this decision to become a musician and go onstage and perform, was very different.”

Yet Hawsawi laughs at the idea of a backup plan involving anything other than music. Although he is in the final stages of completing a business degree, his goal is to incorporate it into his career.

“A lot of artists that I admire incorporate the art with the business, uplifting both trades. But for me, my plans A, B and C are to make music.”

When I ask whether promoting a healthy perspective on emotion and spirituality is something that he wants to consciously encourage as an artist — especially to young men — Hawsawi nods “yes.”

“I grew up with this pressure that if you’re a man, you have to ‘be a man.’ That as a man you don’t cry or express sensitivity. You don’t show if you’re mad or sad about something. Doing this song was me rebelling against everything I grew up pressured by.”

“That pressure is something I definitely encourage everybody to let go of,” adds the singer. “Be okay with it. If you feel emotion, there’s a reason for it. Why not express it, in a healthy way?”

The lyrics and melody were a complete collaboration between Hawsawi and producer Herman, whom he first met in Dubai and quickly grew to become close friends with. After agreeing to create an album together, the song developed organically from the minute they sat down in the studio.

“Before we work on a song we have a conversation, always a deep conversation, which becomes our inspiration. Prior to this song we spoke about loving and feeling a little, about it being okay to feel and cry a little. That’s how the song became ‘Love A Little’.”

“[Herman] got on the keys, we started vibing. The first words that came to our minds are the words we wrote, the first melodies in our minds were the ones we chose. It just felt so natural.”

Thanks to Herman’s influence, Hawsawi speaks of the Philippines with a deep reverence.

“The Philippines is a market that I would really love to get into. Filipino talent is off the hook. They’re a musical nation.”

Being from the Middle East, the singer hopes to establish himself more firmly in the region and have the effects ripple out into the rest of the world, starting with Asia.

“I’d love to have a concert in the Philippines one day, which would hopefully turn into lots more concerts,” says Hawsawi. “Even collaborating with legendary Filipino talents too, such as Lea Salonga — that would be amazing.”

Hawsawi further expresses his gratitude at being able to travel more and connect with people from all over the world.

“Because of music, I meet a lot of people who tell me how they feel, what their influences are, how they grew up. I see now it’s healthy to see different perspectives. It’s just beautiful. I’m very thankful for being able to reflect on these ideas in my own time.”

In terms of young talent, or anyone who feels that they have a gift to share — especially music — Hawsawi firmly believes that the world is their oyster.

“We are in an amazing age where sharing is instant. We have all these platforms — YouTube, Snapchat, Instagram — in the palms of our hands. If you have that kind of talent, just share it. You know what I mean? Share it.”

“At some point, when I used to sing only in my bedroom, I didn’t really believe in myself,” Hawsawi reflects. “I didn’t believe I had talent. But when I shared it with people close to me, I got the energy back. I knew I needed to share it with more people. So sharing is the most important thing. It might start with 5 people and end with 5 million people watching you.”

“So, to the young people, just share your talent. If you have a dream, just follow it, and chase it all the time. Be consistent and persistent.”

As it nears midnight in Dubai, it’s time for Hawsawi to sign off — but not before he shares one last vision.

“My biggest goal for the next few years is to perform at the Grammy’s with an orchestra,” says the singer, smiling. “And Max [Herman] has to be there playing the keys during the performance after I win my Grammy. We’re going to make it happen.”

Hamza Hawsawi’s ‘Love A Little’ is now available on iTunes Philippines and worldwide. Follow his music journey at www.facebook.com/ayzee.hawsawi and www.instagram.com/hamzahawsawi[email protected]