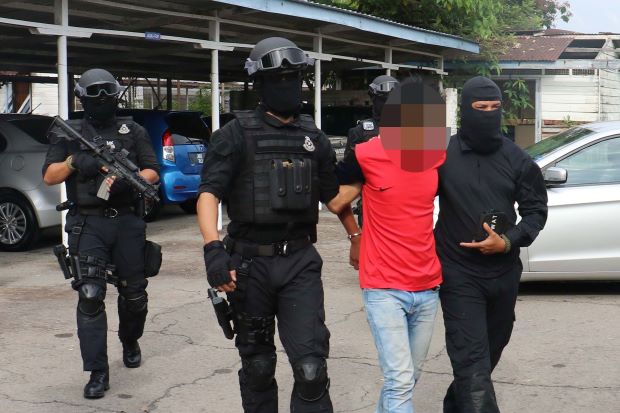 KUALA LUMPUR — Five Filipinos and an immigration officer were among suspected Islamic State (IS) militants who were arrested in Sabah and at the Kuala Lumpur International Airport from last Wednesday to Sunday.

The woman officer is alleged to have arranged for militants to travel without valid documents to Sabah before heading to southern Philippines.

The others included five Filipinos, three of whom have permanent resident (PR) status in Malaysia.

“The suspect with the PR status is believed to have secured funds for Malaysian fugitives Dr Mahmud Ahmad and Mohamad Joraimee Awang Raimee.

“The other suspect is an IS militant who have sworn allegiance to Abu Sayyaf senior leader Isnilon Hapilon,” Khalid said in a statement on Monday.

The other arrests involved a 53-year-old ferry ticket seller and a laborer (both Filipinos with PR status) and the 31-year-old female Immigration officer in Sandakan on Thursday.

“The two suspects with PR status are believed to have assisted in the transit of three Indonesian IS militants to southern Philippines through Sabah.

“The Immigration officer had arranged for the entry of people without valid travel documents, including IS militants from Indonesia and Malaysia, into Sabah before they head to southern Philippines,” he said.

The sixth suspect — a 36-year-old Filipino man — was detained in Sandakan on Thursday with plans to join the IS in Syria.

The seventh suspect, a 36-year-old Malaysian man who was a former medical assistant at Jerantut hospital, was arrested at KLIA on Sunday.

Khalid said the man went to Turkey in October last year and was trying to enter Syria with the help of known Indonesian militant Abu Fateh from Sulawesi but was caught by Turkish authorities on Jan 16 along with Indonesian militants and deported.