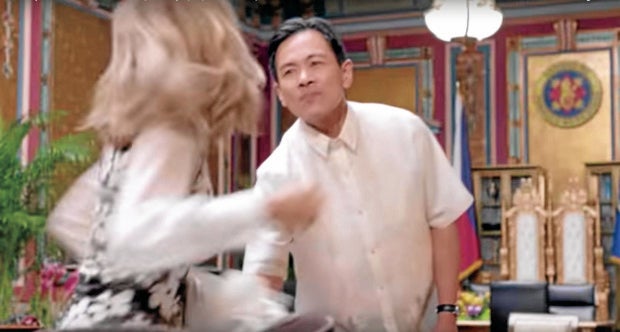 PUNCHED The lead character of “Madam Secretary,” portrayed by Téa Leoni, is about to give “the Philippines’ unconventional new President” a bloody nose in this episode of the American television drama series. —VIDEOGRAB FROM“MADAMSECRETARY” EPISODE

In the next episode of the TV series “Madam Secretary,” which airs on CBS on March 12, the fictional Philippine leader gets punched in the face by the fictional US secretary of state after he makes a pass at her during a foreign policy meeting.

In response, the Philippine Embassy wrote CBS Corp. on Monday to “strongly protest the highly negative depiction of a character purported to be the Philippine President.”

The 20-second video teaser of the episode, titled “Break in Diplomacy,” shows fictional Philippine President Datu Andrada, played by actor Joel de la Fuente, with a bloodied nose after a shocked US Secretary of State Elizabeth McCord, played by actress Téa Leoni, punched him in the face in a room that looks like the Office of the President in Malacañang.

A Philippine flag and the seal of the President of the Philippines are also seen in the background.

Before getting punched in the face, the Philippine leader is shown leering at McCord.

“When a foreign leader crosses the line, the US Secretary of State is forced into a break in diplomacy,” the teaser says.

McCord consults her staff and her husband about what happened to her.

“You think that I should come forward about what happened to me?” she asks a female staff.

“I clobbered a world leader instead of saving a major regional agreement,” McCord tells her husband, played by actor Tim Daly.

“While ‘Madam Secretary’ is a work of fiction, it tracks and mirrors current events,” the Philippine Embassy said in its letter to CBS. “It is, therefore, inevitable that its depiction of world leaders will have an impact on how its audience views the real personages and the countries they represent.”

It added: “This highly negative portrayal of our head of state not only casts doubt on the respectability of the Office of the Philippine President but also denigrates that way our nation navigates foreign affairs.”

The Philippine Embassy urged CBS to take the “necessary corrective actions” as the show “tarnishes the Philippines’ longstanding advocacy for women’s rights and gender equality.”

But the real Philippine President, Mr. Duterte, a confessed womanizer, has previously caused controversy with comments seen as sexist and offensive.

During last year’s presidential campaign, the Australian and American ambassadors in Manila criticized Mr. Duterte for saying he wanted to rape a “beautiful” Australian missionary who had been murdered during a prison riot in Davao City.

He said, “I was angry because she was raped, that’s one thing. But she was so beautiful, the mayor should have been first. What a waste.”

Although his words were clear, Mr. Duterte, 71, reacted angrily to the criticism, saying his remarks had been misinterpreted.

Mr. Duterte also boasted on the campaign trail about having two mistresses but said the women would not cost taxpayers much because he kept them in cheap boarding houses and took them to by-the-hour hotels for sex. —WITH REPORTS FROM LEILA B. SALAVERRIA IN MANILA AND AFP