Malacañang on Sunday reiterated the government’s commitment to address terrorism in the country following the discovery of the remains of beheaded German hostage Jurgen Kantner in Sulu.

“The Philippine government is deeply saddened but resolved as ever to respond to the recent discovery of the body of Mr. Jurgen Kantner, a German national, in the interiors of Talibang, Barangay Buanza, Indanan, Sulu,” presidential spokesperson Ernesto Abella said in a statement.

“President Duterte has declared time and again that terrorism is the twin scourge of narco-politics, and that this government will leave no stone unturned in squarely addressing the evils of extremism and plain banditry,” Abella added. 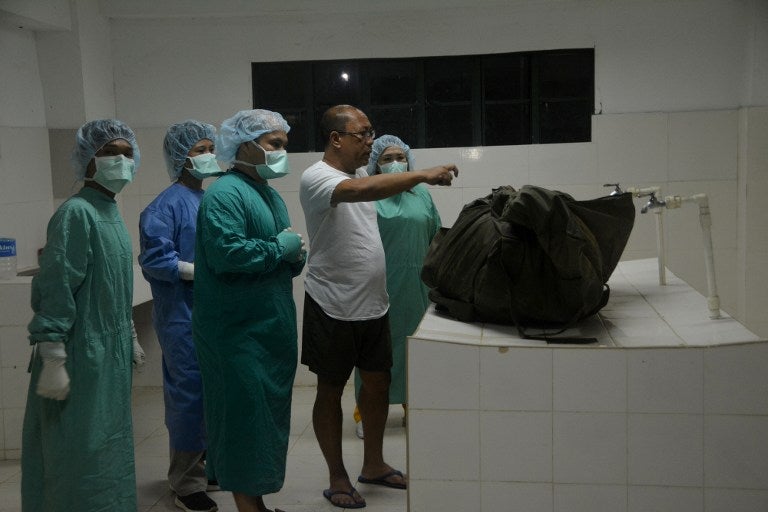 Coroners at a funeral house look at a body body containing the remains of German hostage Jurgen Kantner in Jolo, Sulu province, on the southern island of Mindanao on March 5, 2017.
The Philippine military said on Sunday it had recovered the body of an elderly German hostage who was beheaded by Islamic militants last week. The Abu Sayyaf, a kidnap-for-ransom network in the southern Philippines that has pledged allegiance to the Islamic State group, killed Jurgen Kantner, 70, after its demands for 600,000 USD were not met. / AFP PHOTO / NICKEE BUTLANGAN

READ: ‘We have failed’: Duterte apologizes for beheading of German hostage

Kantner’s body and severed head were found in Sitio Talibang at around 5:45 p.m. on Saturday by government security forces, the military said. According to Professor Octavio Dinampo, the remains were recovered “between the vicinity of the camps of two leaders of the Moro National Liberation Front (MNLF).”

The Abu Sayyaf earlier threatened to kill the 70-year-old Kantner on the afternoon of Feb. 26 if they would not be paid a ransom of P30 million. Kantner was abducted in November last year while his yacht was cruising in waters off Sulu. The yacht was found drifting with the body of his female companion, Sabine Merz.

Kantner and Merz had previously been kidnapped in Somalia in 2008.

Read Next
Palace vows to prosecute people behind extrajudicial killings
EDITORS' PICK
Is it safe to talk politics again at family gatherings? ‘The Reconciliation Dinner’ shows us what that’s like
Pagasa: Warm, sunny Sunday in most parts of PH
The Best Tech Gifts For The 2022 Holidays
EDITORIAL: To a bike-friendly future
vivo’s coming to town to grant wishes with more holiday promos
House energy committee chair Arroyo bats for cheap electricity
MOST READ
LOOK: Vhong Navarro transferred to BJMP detention facility in Taguig
The Elephant Man in the Senate
Posh village as ‘shabu’ haven
LOOK: Zanjoe Marudo bonds with Ria Atayde, her family
Don't miss out on the latest news and information.