Top PH officials fly to US carrier in disputed sea 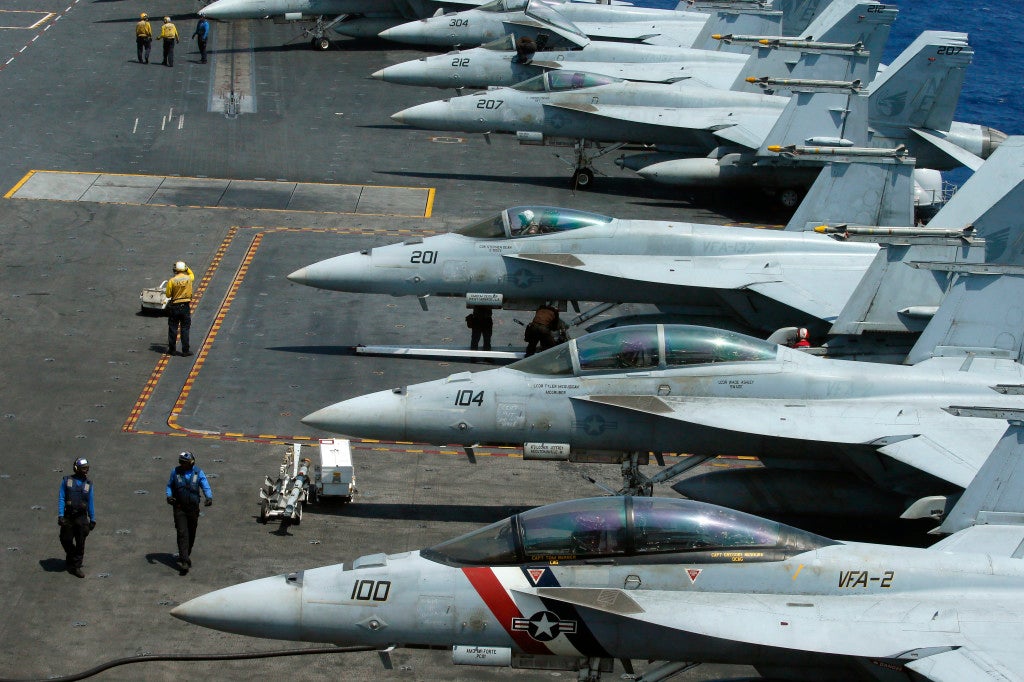 A row of F18 fighter jets on the deck of the U.S. Navy aircraft carrier USS Carl Vinson (CVN 70) is prepared for patrols off the disputed South China Sea Friday, March 3, 2017. AP

The Philippine defense chief and two other Cabinet members on Saturday toured a U.S. aircraft carrier patrolling the disputed South China Sea on the invitation of the Navy, U.S. Embassy officials said.

The visit shows continuing top-level engagements between Philippine officials and the U.S. military despite Philippine President Rodrigo Duterte’s threat to scale back engagements with American forces while reaching out to China and Russia. There was no immediate reaction from China, which had opposed U.S. patrols in waters it has claimed virtually in its entirety.

The U.S. ambassador to Manila, Sung Kim, accompanied the Philippine officials to the Carl Vinson, where they watched F18 fighter jets land and take off on catapult on the flight deck and met U.S. navy commanders in charge of the 95,000-ton carrier as it sailed in the disputed waters, Koscina said.

U.S. Navy officials told a small group of journalists who were flown to the Carl Vinson on Friday that the U.S. warship deployment was aimed at ensuring freedom of navigation and overflight in the South China Sea, a key waterway for global commerce and security.

“We will be here,” Rear Adm. James Kilby told the journalists, including those from The Associated Press. “We’re going to continue to demonstrate that international waters are waters where everyone can sail, where everyone can conduct commerce and merchant traffic.”

Kilby’s comments and the presence of the carrier in the South China Sea are aimed at reassuring American allies, who have expressed concerns over China’s aggressive actions to assert its claims to virtually all of the South China Sea. The nuclear-powered Carl Vinson, which is manned by about 5,500 military personnel, is part of a U.S. strike group comprising 12 warships and nine aircraft squadrons.

In recent years, China has turned seven mostly submerged disputed reefs into islands where Beijing is now reportedly installing a missile defense system. Chinese officials have stressed that they have a right to carry out those constructions in what they say are their territories and add they have no hostile intentions in the region.

But worries over China’s actions have grown. Governments fear its actions could later restrict movement in a key waterway for world commerce with rich fishing grounds and potential undersea deposits of oil and gas.

“There is a lot of worry about what China’s intentions are,” said Ernest Bower, a senior adviser for the Southeast Asia program of Washington-based think tank Center for Strategic and International Studies.

“I think the question everyone has is, ‘(are) the Chinese trying to shut down access to the South China Sea?'” Boyer told reporters in Manila. “The Americans are saying under no circumstances would that be acceptable to the international community.”

Duterte, who took office in June and describes himself as a left-wing politician, has declared that he would chart a foreign policy independent of the U.S., his country’s longtime treaty ally. Last year, he lashed out at then-President Barack Obama and the State Department, which has raised concerns over Duterte’s deadly anti-drug crackdown.

There have also been questions if America’s role as a counterweight to China, particularly in the disputed waters, would change under President Donald Trump.

After Obama ended his term, Duterte has moderated his language toward the U.S., allowing an opportunity for military engagements to continue to flourish, Boyer said, adding that he believed Trump’s security team may take a firmer stance on the territorial disputes.

“I would actually suspect we’ll see more determination from the Americans on the South China Sea, sort of a bit of a harder edge towards the Chinese,” Boyer said. “I think that’s going to … cause a little bit of a bumpy road, to be honest with you.”