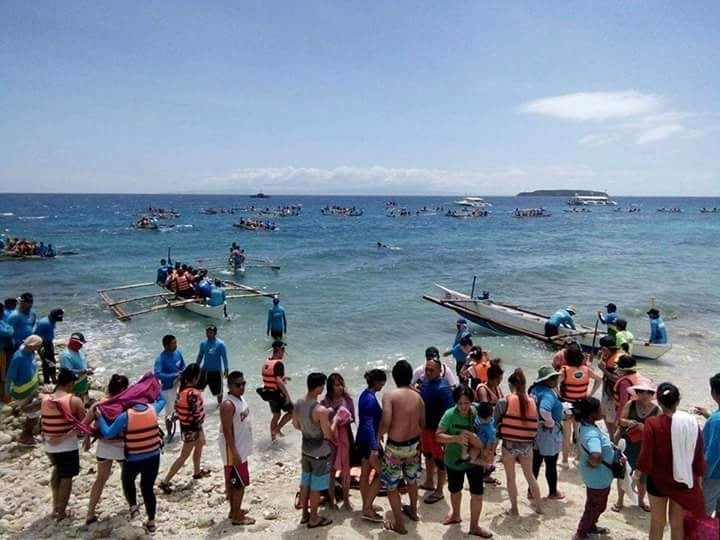 Curious locals and tourists checked who was in Oslob for a visit after tight security was noticed last Saturday. Photo via Oslob Police Station

Princess Sirivannavari Nariratana of Thailand and her party arrived in Barangay Tan-awan, Oslob on Saturday morning to fulfill her desire to swim with the whale sharks, a tourist attraction of the municipality.

Security was tight and no one was allowed to take photos of the princess, said PO2 Jun Emar Jerusalem, desk officer of Oslob police station.

The visit was unannounced which caught several residents by surprise.

“Only a few tourists and residents knew about her visit because some of them were curious why there were many policemen present in the area,” said Jerusalem.

Mayor Jose Tumulak Jr. of Oslob said in a phone interview that a member of the Princess Nariratana’s advance party met him two weeks ago about the planned visit of a member of the Thai monarchy.

“The advance party told the princess that our town is far away from the city but she insisted since she wanted to try (swimming with the whale sharks) and she loves diving,” Tumulak said.

Oslob, a fourth class municipality with annual income of not more than P35 million, is more than three hours travel by bus from the capital Cebu City.

Tumulak said that on Thursday, another member of the advance party told him that the princess would push through with her trip.

The emissary, however, didn’t give him the schedule for security reasons, he added.

Jerusalem said that Princess Nariratana and her party arrived in Oslob at 5:45 p.m. on Friday.

But she spent the night on Sumilon Island, one of the popular destinations in Oslob known due to its white sand bar.

The next day, Princess Nariratana took her first swim with the whale sharks at 8 a.m. and her second, at 10 a.m.

Princess Nariratana and her party left Oslob past 2 p.m. on the same day.

The princess’ visit came more than a month after five candidates of Miss Universe went to Oslob to swim with the whale shark last December.

Their visit was criticized by environmentalists who said feeding and swimming with the whale sharks were not sound environmental practice and should be stopped because it didn’t teach the largest fish in the sea to hunt their own food.

Although other candidates didn’t push through with their plans to go to Oslob, the visit was enough to increase the popularity of the town’s main tourist attraction.

He admitted that tourism arrivals in Oslob went down last year when the United States Embassy in Manila issued a travel advisory, discouraging their nationals from going to southern Cebu, including Oslob, due to terrorist threats.

But the police and the military downplayed the US advisory, saying Cebu remained safe.

Tumulak assured that Oslob town remains safe for all local and foreign tourists.

“They (Thai nationals) will not be afraid to visit Oslob because even their princess was here,” Tumulak said. JE