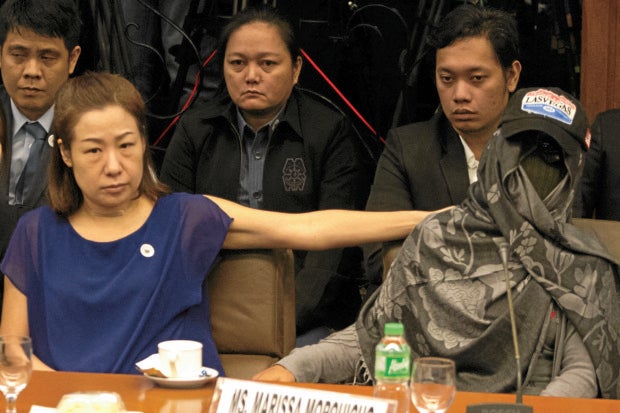 Was the maid of slain Jee Ick-joo involved in his brutal murder?

This possibility was raised at the resumption of the Senate inquiry into the Oct. 18, 2016, kidnap-slaying of the Korean businessman on Thursday when Sen. Leila de Lima disclosed that Marisa Dawis Morquicho, Jee’s maid, had a namesake with a kidnapping conviction.

De Lima asked the officials of the Philippine National Police and the National Bureau of Investigation, which have clashing findings on who masterminded Jee’s murder, to determine if indeed Morquicho and a Marisa Dawis Calayan with a criminal record were the same person.

“It’s too much of a coincidence if it would be confirmed that they are one and the same person, then that’s another kidnapping case,” she said.

Jee, along with Morquicho, was seized from his house in Angeles City in an alleged antidrug operation.

Unlike her boss, Morquicho was freed unharmed by police officers led by SPO3 Ricky Sta. Isabel, the principal suspect in the murder.

One of them had a record of a kidnapping conviction, Delemos said.

The only way the NBI could make this determination if this was the same person was for it to compare the existing fingerprints in its office and that of Morquicho, who is in the custody of the AKG, according to Delemos.

Sen. Panfilo Lacson, the committee chair, acknowledged that if it was proven that Morquicho and Calayan were the same person then this was something very substantial.

De Lima told reporters after the hearing that she had information that Morquicho had a criminal record and if it was proven she was Calayan, then “there is a big possibility that she is part of a syndicate.”

Asked if the syndicate could be the Korean mafia that Justice Secretary Vitaliano Aguirre II said he was now investigating, De Lima said, “We really do not know that.”

At the hearing, Aguirre raised the Korean mafia link in Jee’s kidnapping.

He said he had received information that Jee had been kidnapped twice in the country by the Korean mafia.

He said he had talked about this with Jee’s widow, Choi Kyung-jin.

Aguirre said there was a theory that Jee was fighting the Korean mafia “and they hired the scalawags of our police agencies, from the NBI, to do Mr. Jee Ick-joo in. And from the looks of it, that was what happened because you just don’t kill someone immediately if this was just a kidnapping case.”

Dumlao also raised the possibility during the hearing that Jee had been a “target of murder,” allegedly to keep him quiet, adding that the demand for ransom after his slay was just “an afterthought” by his abductors.

Jee, who ran a manpower services firm after working as director in a Korean heavy industries company, was strangled in his car and was later cremated in a funeral parlor owned by a former police officer and the ashes flushed down the toilet.

“We conducted intelligence validation, and what we see is that Jee  was already a target to be killed, not for ransom,” Dumlao said under the questioning by De Lima.

He revealed that a Korean national,  Edward Yu-on, asked Choi for money  to negotiate her husband’s release with the PNP and the NBI.

Yu-on,  whose whereabouts are unknown, allegedly asked for a total of P800,000 from Choi.