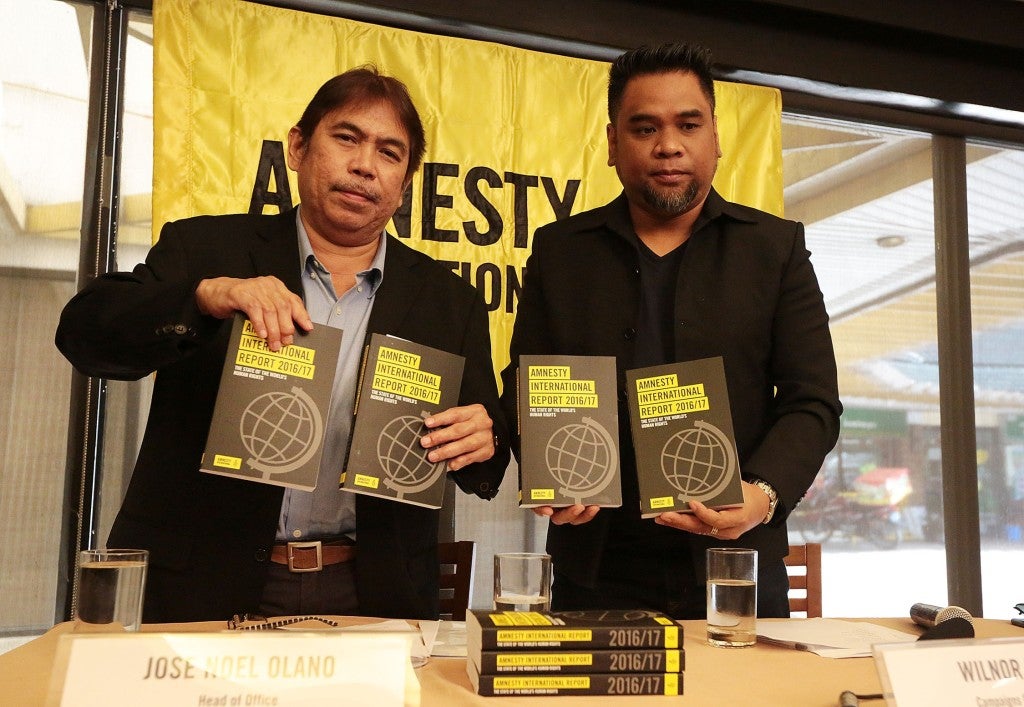 PARIS—Amnesty International says “toxic” fear-mongering by antiestablishment politicians, among them Presidents Donald Trump and Rodrigo Duterte, is contributing to a global pushback against human rights.

Releasing its 408-page annual report on rights abuses around the world on Wednesday, the watchdog group described 2016 as “the year when the cynical use of ‘us vs them’ narratives of blame, hate and fear took on a global prominence to a level not seen since the 1930s,” when Adolf Hitler rose to power in Germany.

“The limits of what is acceptable have shifted. Politicians are shamelessly and actively legitimizing all sorts of hateful rhetoric and policies based on people’s identity: misogyny, racism and homophobia. The first target has been refugees and, if this continues in 2017, others will be in the cross hairs.”

Amnesty’s annual report, “The State of the World’s Human Rights,” documents what it calls “grave violations of human rights” in 159 countries in 2016.

It says governments “turned a blind eye to war crimes, pushed through deals that undermine the right to claim asylum, passed laws that violate free expression, incited murder of people simply because they are accused of using drugs, justified torture and mass surveillance and extended draconian police powers.”

“In the Philippines, acting on instructions and incitement from the very top of government, the police have killed and paid others to kill thousands of alleged drug offenders in a wave of extrajudicial executions that may amount to crimes against humanity,” Amnesty says.

The report adds that “the big question in 2017 will be how far the world lets atrocities go before doing something about them.”

Mr. Duterte’s spokesperson, Ernesto Abella, said it was “regrettable” that Amnesty had brushed aside “the more than  1,000,000 users and dealers who have surrendered, the discovery of megadrug laboratories and the narcopolitics which have contaminated our politics, governance and law enforcement agencies.”

“The President received an overwhelming mandate last election; and presently, more than 8 out of 10 Filipinos trust and are satisfied with the administration’s campaign against illegal drugs, and its handling of criminality, according to recent surveys,” Abella said.

Exceptionally, London-based Amnesty chose to launch its report in Paris.

Salil Shetty, the group’s secretary general, said France had used emergency powers introduced in 2015 in the wake of terror attacks in an abusive and “deeply discriminatory” manner, confining more than 600 people, mostly Muslims, under house arrest and banning more than 140 protests.

France’s government has repeatedly defended the emergency powers as a necessary safeguard against the severe terror threat it says is facing the country, and parliament has repeatedly voted to extend those powers. —WITH REPORTS FROM AP, AFP, DONA Z. PAZZIBUGAN AND LEILA B. SALAVERRIA