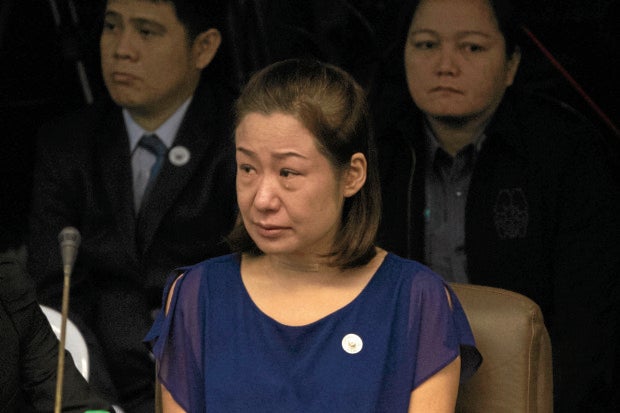 The widow of South Korean businessman Jee Ick-joo who was kidnapped and murdered allegedly by police antinarcotics officers, has requested President Duterte to remove the National Bureau of Investigation from a new probe of her husband’s murder.

“I do not trust the NBI to carry out an impartial investigation,” Choi Kyung-jin said in her Feb. 3 letter to the President. She said she preferred the Philippine National Police Anti-Kidnapping Group (PNP-AKG) to be the sole agency to handle the reinvestigation rather than a joint PNP-NBI probe.

“With the news that several high-ranking NBI personnel might also be involved … I am afraid that this will only further delay the speedy resolution you promised,” Choi said.

“Please Mr. President, while I appreciate the attention you have given to this case, I hope that it will really be resolved at the soonest possible time to allow us the closure we desperately need,” she added.

Police Supt. Rafael Dumlao, who had been accused as the brains of the kidnap-slay by one of the main suspects, had alleged that some members of the NBI were involved.

Several senior NBI officials had been relieved as a result of Dumlao’s allegations.

Meanwhile, the PNP and the NBI appeared confused about whether they were indeed partners in a joint task force to reinvestigate the murder, which had been ordered by a court in Pampanga where Jee was killed.

The confusion emerged on Thursday after the PNP-AKG and the NBI had requested from the Department of Justice (DOJ) separate deadlines for submitting additional documents on the case.

The PNP-AKG sought a 15-day extension while the NBI asked for 20 days.

“How joint is this task force?” asked Senior Assistant State Prosecutor Juan Pedro Navera. “If this were really a task force, we would be receiving one motion for extension [but] we received two asking for extension with different periods. So, is there really a joint task force to speak of?”

“As far as I know, we do not have a written order. We only have a special order issued by the [NBI] Director,” he said.

The PNP-AKG representative said there had been no formal order creating the joint task force, but both agencies were coordinating to speed up their work.

The court had given the DOJ 60 days to finish the reinvestigation after three suspects in the case—SPO3 Ricky Sta. Isabel, SPO4 Roy Villegas and Ramon Yalung—argued that they were deprived of their constitutional right to due process when the DOJ indicted them without giving them the opportunity to file counteraffidavits during the preliminary investigation.

“We are dealing with the court who has given us 60 days, so let us act fast,” Navera said.

The DOJ gave the PNP and the NBI up to Monday to submit all their documents and evidence.