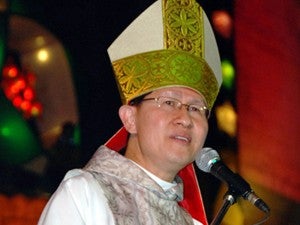 Imus Bishop Luis Antonio Tagle, a former member of a theological body once headed by Pope Benedict XVI before he became Pontiff, has been appointed the new archbishop of Manila.

Tagle took over the Manila archdiocese from Gaudencio Cardinal Rosales, whose resignation has been accepted by the Pope.

Tagle’s appointment was announced yesterday in the Vatican and by Charge d’Affaires Msgr. Gabor Pinter of the Apostolic Nunciature in Manila.

Tagle hosts a Sunday program, “The Word Exposed,” on ANC, Studio 23 and the government-owned NBN. He also has a Facebook page, which has been flooded with congratulations from online fans.

He is affectionately known by his nickname, Chito.

Well-wishers took turns shaking and kissing the cardinal’s hand and posing for souvenir pictures with him.

Rosales, 79, earlier said the Vatican had already accepted his resignation and he was just waiting for his successor to be named. He submitted his resignation in 2007 when he turned 75, the mandatory retirement age for prelates, but the Pontiff extended his term indefinitely.

Tagle sent a statement expressing confidence that he would be able to fulfill his new duties with God’s help.

“I face this heavy responsibility with much trepidation,” Tagle said. “Leaving the Diocese of Imus, my beloved home, at the threshold of its Golden Jubilee, is not easy. But faith in our gracious Lord and love of the Church give me strength.”

Tagle added: “I know that I would find much good will and zeal for my mission in the clergy, religious and lay faithful of the Archdiocese of Manila. In our openness to the Holy Spirit, we could render a joyful and robust witness to Jesus Christ, all for the glory of the Father and the good of the Church and of society, especially, especially of the poor.”

Tagle, 54, will be the 32nd archbishop of Manila and its first Manila-born archbishop. He is also the youngest Manila archbishop after the Irish-born James Michael O’Doherty, who was appointed in 1916.

Tagle was ordained a priest in 1982 and appointed Imus bishop in 2001. Imus is one of the dioceses of the Manila metropolitan archdiocese.

From 1985 to 1992, Tagle was sent for further studies to the Catholic University of America in Washington, DC, where he earned his doctorate in sacred theology.

Tagle served as member of the International Theological Commission while it was still chaired by Cardinal Joseph Ratzinger, later Pope Benedict XVI. Tagle served as a theologian of at least two ordinary synods at the Vatican.

He currently teaches theology at the Loyola School of Theology in Manila and the Divine Word Seminary in Tagaytay City.

He is also currently the chairman of the Commission on Doctrine of the Faith of the Catholic Bishops’ Conference of the Philippines (CBCP).

“In the 10 years that Archbishop Tagle was in the episcopacy and ministry, he showed that his ministry was very pastoral,” Rosales said. “Care for the laity and also in a special way for the priests’ characterized his pastoral work.”

No date has been set for the ordination and installation of the new Manila archbishop. Until that time, the Vatican said Rosales would be the temporary administrator of the Manila archdiocese.

Rosales, who will now be referred to as the archbishop emeritus of Manila, said he would return to his native Lipa City and live in a retirement home for priests there. Rosales was archbishop of Lipa from 1992 to 2003.

He said he was looking forward to having more time to pray and write. He said he was planning to write a book about the late Lucena Bishop Alfredo Obviar, whose cause of beatification Rosales had been pursuing for several decades.

“See me at the second floor, Room Number 8,” Rosales said.

Asked what legacy he would want to be known for, Rosales said that he did not want to be remembered in any way.

His advice to Tagle is to “continue to preach about Jesus,” and to connect with Catholics of his new archdiocese, which covers the cities of Manila, Pasay, Makati, Mandaluyong and San Juan.