Duterte not inclined to send envoy to US 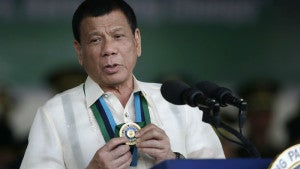 President Rodrigo Duterte said on Thursday he was not inclined to send an ambassador to the United States (US).

In August 2016, the President said his chief protocol officer, Marciano Paynor, would be the next ambassador to the US, replacing Jose Cuisia Jr.

He also earlier asked columnist and media executive Jose Manuel “Babe” Romualdez to become the next envoy to the US. But Romualdez declined for health reasons.

The US government, under President Barack Obama, earlier earned the ire of Duterte for criticizing his brutal war on illegal drugs.

He even threatened to sever ties with its longtime ally.

But with the assumption of US President Donald Trump, Duterte said he could work along well with his counterpart. /ATM