Panelo sent to Seoul to apologize for murder 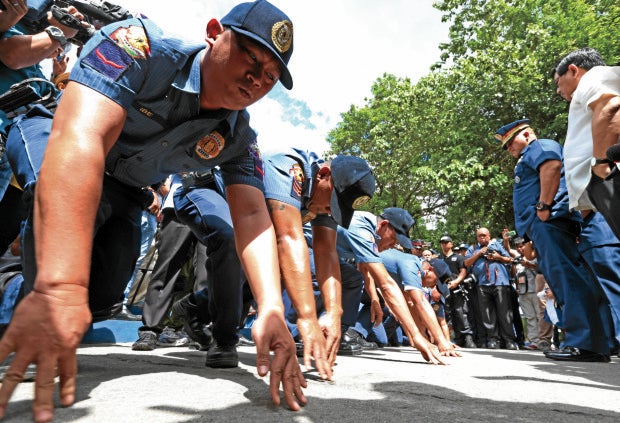 President Rodrigo Duterte is sending his chief legal counsel, Salvador Panelo, to personally convey the Philippine government’s apology to South Korea for the killing of its national, Jee Ick-joo, by police officers, who kidnapped him under the guise of an antidrug operation.

Panelo was scheduled to fly to Seoul on Wednesday.

“I told him to make a good apology. There’s nothing we can do. It happened,” Mr. Duterte said on Tuesday at the oathtaking of newly promoted military officials.

Mr. Duterte spoke of his dismay at Jee’s killing by the police operatives, which prompted him to suspend the police’s participation in antidrug operations.

Jee was strangled the same day he was kidnapped in October last year, and his body cremated and flushed down a toilet.

“The most disrespectful gesture of all, which really hurt them, is flushing (the ashes) down the toilet bowl. They were hurt. We would feel the same if it was done to us,” he said.

Mr. Duterte asked the Armed Forces of the Philippines to join his campaign against illegal drugs and to arrest crooked police officers.

“If I do not bring you into the game, I will be in trouble. Nobody would go after the abusive police,” he said.

Senior Assistant Prosecutor Juan Pedro Navera on Wednesday signed a subpoena summoning eight suspects in the Jee case to appear at the Department of Justice two days after the Angeles City Regional Trial Court  ordered a reinvestigation of the Korean’s killing.

The case has achieved more clarity in recent days since Sta. Isabel and his wife  debunked Villegas’ testimony that Sta. Isabel masterminded the abduction, which was conducted under the pretext of “Oplan Tokhang,” and that Sta. Isabel himself killed Jee.

Sta. Isabel countered that it was Rafael Dumlao who was the brains of the operation.

The surrender of Santiago, owner of Gream Funeral Parlor in Caloocan City where Jee’s body was brought, and Omlang, an NBI “striker,” has made it imperative for a reinvestigation of the case.

He ordered them to do push-ups in front of the flagpole at Camp Tomas Pepito while he berated them.

“You did not even have the decency to be ashamed. You became policemen and yet you end up acting like criminals,” Dela Rosa told the policemen when they were presented to him.

The three Koreans—Min Hun-park, Lee Ki-khun and Lee Jun-hung—said the policemen took them after falsely accusing them of engaging in illegal online gambling.

Domingo admitted receiving P300,000 in exchange for the release of the Koreans they held last Dec. 30. —WITH A REPORT FROM TONETTE OREJAS