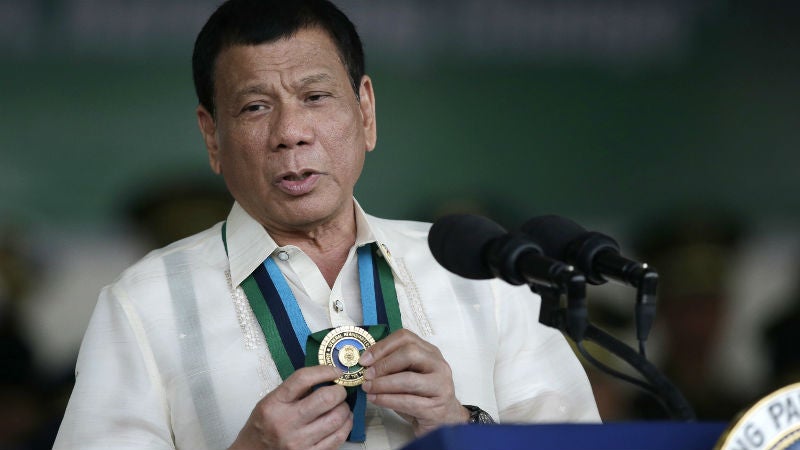 President Duterte has accused the US military of constructing “permanent” arms depots in the country in violation of the Visiting Forces Agreement (VFA) between the Philippines and the United States.

“They’re unloading arms in the Philippines now … I am serving notice to the Armed Forces of the United States: Do not do it. I will not allow it,” the President told a press conference in Malacañang shortly before Sunday.

Mr. Duterte, who had openly lambasted America for allegedly interfering in the country’s economic and political affairs, threatened to abrogate the Philippines’ military agreement with the US if American forces would continue bringing in war armaments.

He said the VFA, which was ratified by the Senate in 1999, explicitly stated that US forces are not allowed to build permanent structures anywhere in the Philippines.

He claimed the US military was “unloading arms” in its temporary facilities in Palawan, Cagayan de Oro City and Pampanga.

“A depot by any other name is a depot. It’s a permanent structure to house arms. And I do not even know if there is a nuclear tip now that they are unloading because we don’t allow that,” he said.

“It’s not allowed by the treaty. You do that and I will consider a review and maybe ultimately, abrogation, since it is an executive order. (I will) abrogate the treaty altogether,” he warned.

He also chided the US for pressuring the Philippines to enforce a ruling last year by the Permanent Court of Arbitration in The Hague that invalidated most of Beijing’s claims to the South China Sea.

He said he had a “solemn commitment” to Chinese President Xi Jinping that he would raise the Philippines’ victory in the international arbitral court which recognized the country’s ownership claims in due time.

“And I would like to assure the President of China, Xi Jinping, that I will stand by my word,” he said.

Mr. Duterte surmised that the US could be prepositioning its military weaponry in case America engaged China in a shooting war over the South China Sea dispute.

“Am I a fool to agree with that? Yes, we’re friends, but don’t drag us … China is claiming it. You are insisting it is now an international sea while the arbitral says that is ours,” he said.

“Don’t drag the Philippines because I will not allow it. You will kill the Filipinos. How can we fight back? You place us all in danger.”

His comments came after the Pentagon gave the green light to build warehouses, barracks and runways this year under a 2014 Enhanced Defense Cooperation Agreement (Edca) between the two longtime allies.

Edca allows the expansion of rotational deployment of US ships, aircraft and troops at five bases in the Philippines as well as the storage of equipment for humanitarian and maritime security operations. —WITH REPORTS FROM  THE WIRES