Gov’t, Reds end 3rd round of talks in Rome without reaching ceasefire agreement 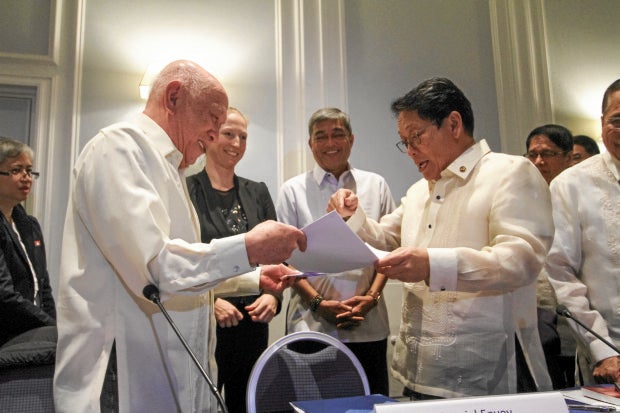 Negotiators of the government and the communist-led National Democratic Front of the Philippines congratulate
themselves for a “most successful” round of talks in Rome on Wednesday.—KARLOS MANLUPIG

ROME—The third round of talks between the government and the National Democratic Front of the Philippines (NDFP) ended without a bilateral ceasefire agreement, but both sides gave assurance that their separate unilateral truce would hold.

The chief government negotiator, Labor Secretary Silvestre Bello III, had voiced hopes at the beginning of the talks that obstacles to a joint ceasefire agreement could be overcome during this round of talks, which were held on Jan. 19-25 on the outskirts of Rome.

Both parties nevertheless described the negotiations as “successful” in a joint statement that was delayed by last-minute wrangling over wording.

Wednesday’s closing ceremony, which was scheduled at 3 p.m. local time, was held back at least two hours.

“The parties note that their unilateral indefinite ceasefires remain in place,” the peace panels said in the joint statement. They added that “there are issues and concerns related thereto.”

A clash between government forces and New People’s Army fighters on Jan. 21 in North Cotabato, which left one communist guerrilla dead, sparked concerns that it will imperil their unilateral ceasefire.

Bello has said that a mutual ceasefire would lay the ground for an agreement on all elements of a truce, including its scope, activities allowed by both sides, monitoring and grounds for citing violations, which are absent from a unilateral ceasefire.

Benito Tiamzon, a member of the NDFP panel who was identified by the military as the chair of the Communist Party of the Philippines (CPP) at the time of his arrest in 2014, said there were complaints from rural communities about military presence, threats and surveillance in the villages.

“The communities and ground units are asking for a bigger reason why we should still consider continuing (the truce),” Tiamzon said.

The chief NDFP negotiator, Fidel Agcaoili, said the decision to continue the unilateral ceasefire did not rest with the NDFP panel alone but also with the leadership of the revolutionary movement.

The 47-year-old communist-led insurgency in the Philippines is one of the longest running in the world and has claimed an estimated 30,000 lives, according to the military.

The NDFP ceasefire committee said it had received the government’s proposed “interim” bilateral ceasefire agreement. The NDFP said it would “seriously study the proposal, submit comments and may provide its own updated version” of the draft accord.

4th round of talks set

Both parties agreed to meet for a fourth round of formal talks in Oslo on April 2-6. Representatives of both sides dealing specifically with the ceasefire issue will meet sooner, in Utrecht in the Netherlands, on Feb. 22-27.

The peace talks, brokered by Norway, were held in Rome because Oslo in January was too cold.

Negotiators said that amid the warm atmosphere in the talks, the disagreements during the discussions reminded them that the road to peace remains thorny.

In their eight-page joint statement, they said significant gains were achieved in the discussions on socioeconomic reforms, political and constitutional reforms, and the additional guidelines for the Joint Monitoring Committee (JMC).

One of the highlights of the Rome talks was the initial understanding to push for the free distribution of land to farmers and farmworkers “as part of the governing framework” of the agreement on socioeconomic reforms but subject to consultations with government agencies.

Both parties had earlier signed the supplemental agreement that would operationalize the JMC and process complaints of human rights violations.

The parties also agreed to study a possible amnesty for the remaining 392 NDFP-listed political prisoners.

The government also vowed to facilitate the release of

Norwegian special envoy to the Philippine peace process Elisabeth Slattum described the third round of talks as “very successful” and commended both parties for being constructive and solution-oriented.

The government side also said it would ask US President Donald Trump to remove Jose Maria Sison, the exiled founding chair of the CPP, from the US list of international terrorists to allow him to travel to the Philippines.

However, the request for delisting Sison had not been included in the joint statement for still unknown reasons.

Sison, who has lived in exile in the Netherlands since 1987, was put on the US terrorist list in 2002. The peace talks have been held outside the Philippines partly because of Sison’s inclusion on Washington’s list of terrorists. —WITH A REPORT FROM LEILA B. SALAVERRIA AND AFP