SE Asia not a ‘proxy’ for superpower rivalry — Philippines 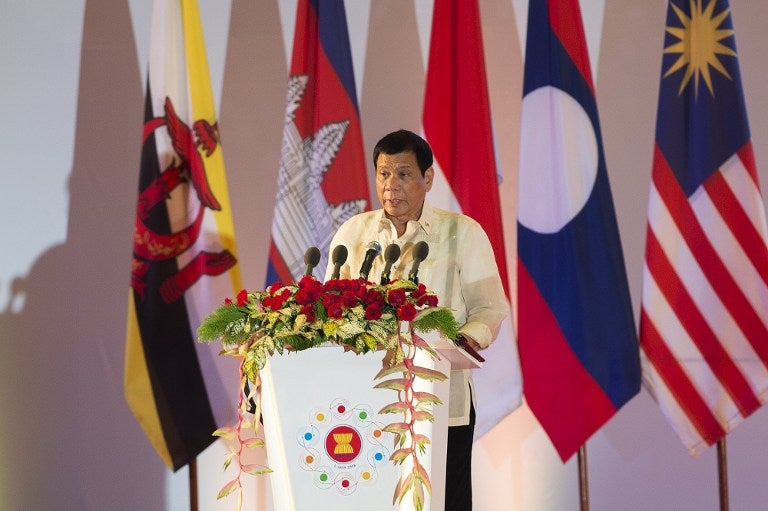 President Rodrigo Duterte speaks during the closing ceremony of the Association of Southeast Asian Nations (ASEAN) and handover of the ASEAN Chairmanship to Philippines in Vientiane on September 8, 2016. AFP

SINGAPORE, Singapore — The Philippines on Monday told major global powers that Southeast Asia was not a “proxy” for superpower rivalries, as Washington and Beijing compete for influence in the region.

Conflicting claims over the South China Sea, which straddles vital commercial shipping lanes and is believed to sit atop vast natural gas deposits, have placed the Association of Southeast Asian Nations (ASEAN) at the center of the struggle for regional influence among countries such as the United States and China.

Philippine Defense Minister Delfin Lorenzana told a security forum in Singapore it was time for outsiders to let ASEAN, currently chaired by Manila, determine its own course.

“As host… we will have to remind our friends, firmly if necessary, not to use ASEAN as a proxy for their rivalry,” Lorenzana said at the Fullerton Forum.

“We will reaffirm the unity and solidarity of ASEAN amidst this emerging superpower competition. We will also work for the finalization of a binding code of conduct for the South China Sea,” he added.

Four ASEAN members — Brunei, Malaysia, the Philippines and Vietnam — along with China and Taiwan have laid partial or entire claims to the sea, which security analysts say is a potential flashpoint for conflict.

China, which claims almost the entire sea based on historical rights, angered other claimants when it built artificial islands in a bid to bolster its ownership bid.

While not a claimant, Washington says it has strategic interests in keeping the sea lanes open and criticized China for its island-building activity.

Previous ASEAN meetings have been marred by disunity on how to deal with Beijing over the South China Sea.

An arbitration court in The Hague last year said in a landmark ruling that China’s claims had no legal basis.

However Philippine President Rodrigo Duterte has taken a more conciliatory approach to China, leading to a warming in bilateral ties as he steers Manila away from the US, its long-time defense treaty partner.

Lorenzana said Monday that talks with China about ownership are likely to be shelved for the time being and that both countries would “just manage the dispute for the benefit of everybody”. CBB