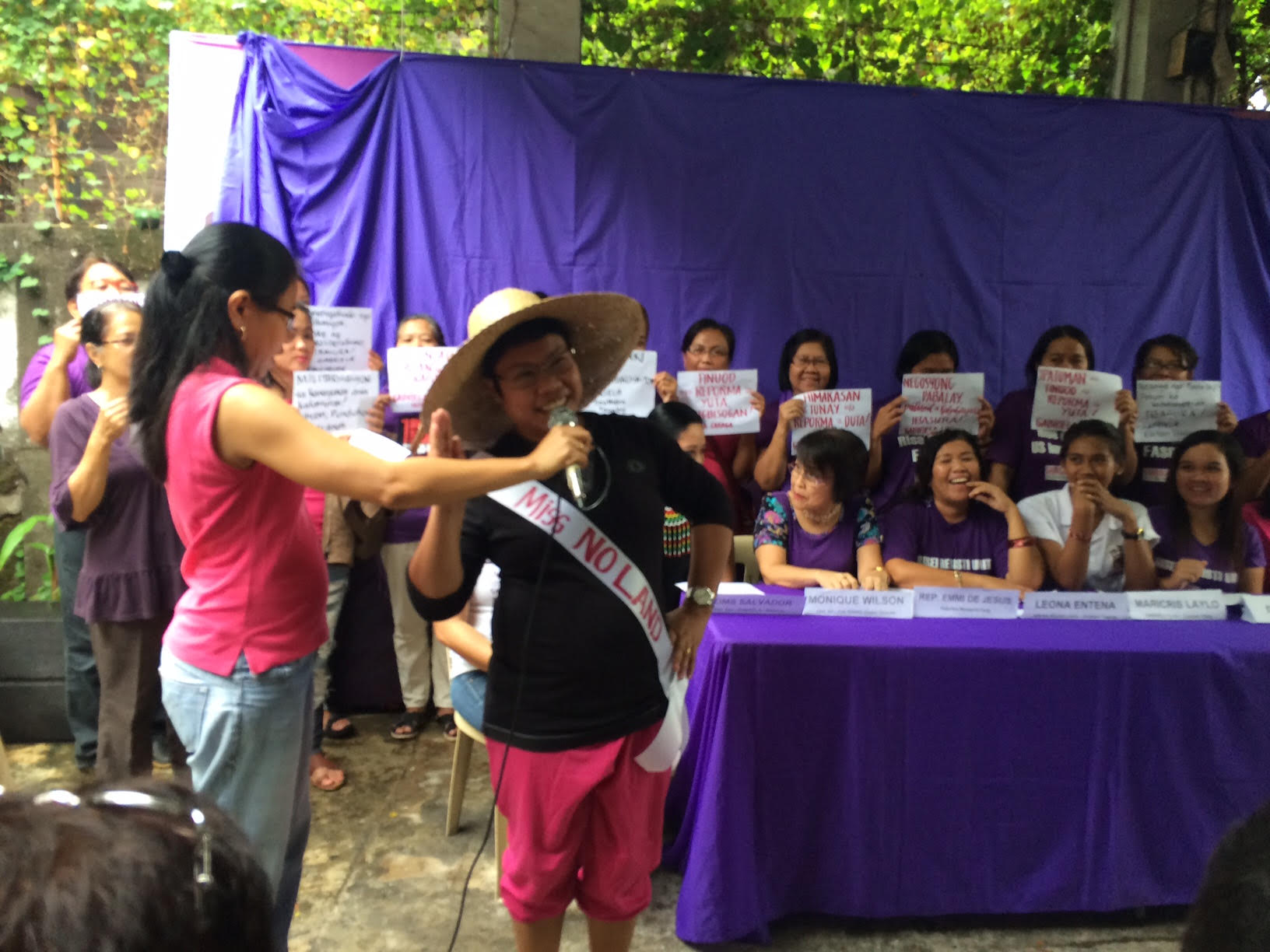 Members of the Gabriela Alliance of Women and other women’s groups stage a spoof of the Miss Universe beauty pageant, calling their mock contest Miss Neo-libers, a swipe at neo-liberal economic policies that have abandoned the poor. They also slammed the Miss Universe pageant as something that Western capitalists profit from but does not empower women as it claims. (PHOTO BY JODEE AGONCILLO / INQUIRER)

MANILA — As candidates of this year’s Ms Universe competition made a courtesy call to President Duterte in Malacañang on Monday afternoon, members of the Gabriela women’s group held their own pageant in the morning, voicing out the “unglamorous” and “exploited” plight and state of women today.

“While the Ms Universe corporate sponsors  rake in profits from beauty contests, we call on the attention of people to the neoliberal economy, an even larger global competition that renders billions of women and children slaves to hunger, war and suffering in the Philippines, and other countries,” said Joms Salvador, Gabriela Alliance of Women secretary-general, in a statement.

Clad in simple dresses, T-shirts, jeans, but definitely not stilettos, the candidates answered during the mock question and answer portion with key Gabriela officers serving as their interpreters. A talent portion — a group dance number — followed after.

The mock pageant conference was staged to drumbeat the annual One BIllion Rising Campaign to end violence, and as a support to the protests against US President Donald Trump, led by millions of women in the US worldwide, De Jesus said.

“Our objective is to show the real state of Filipino women. That its real cause is the government’s neoliberal policies and especially now that Donald Trump is US’s new president. Historically, Trump profited from the Ms Universe pageant. We can show the real plight of women by exposing the real people who benefit from it. The bottom line (of beauty pageants) is still profit, the capitalist and the businessmen,” she added.

Monique Wilson, director of One Billion Rising Campaign, said they have been fighting against the exploitation of women.

“Ms Universe is a symbol of exploitation to women. Aside from economic exploitation, there’s commodification and objectification as well. They are being sold, being used for profit, and were made objects. It’s not that we are against beauty. We are against the beauty standards they set that are unrealistic,” she said.

De Jesus, in a statement, also slammed business groups such as  Philippine Airlines and SM Group of Companies “for banking on the world’s biggest woman pageant to cover up their anti-women record.”

“It is ironic that PAL and SM are bannered in Miss Universe events when these corporations discriminate against women,” she said. PAL, she said, pushed for compulsory retirement of female attendants at age 55 when the standard mandatory age for retirement has always been 60.  She added PAL discouraged their flight attendants from marrying. SM, meanewhile, has been ‘notorious’ for the hiring of thousands of underpaid contractual salesladies, according to De Jesus.

The vice chair of House Committee on Overseas Workers Affairs, De Jesus said Filipino migrant workers have remained in slave-like jobs for decades.  She cited as example the case of Irma Jotojot who died in Saudi Arabia last year.  In the country also, 22 women and children are raped everyday, according to De Jesus.

Ms Endonasya talked about  contractualization, which Duterte earlier promised to abolish; Ms Eskwela Loompoor cited the problems of the K-12 system and education; Ms Demolition Republic stressed the unfair demolition orders on informal settlers, while Ms Saudi ArabYaya discussed the plight of OFW workers who were abused and killed outside the country. “Before, OFWs bring home balikabayan boxes, now cold bodies of OFWS are being brought home in boxes,” Ms Saudi ArabYaya, greeting the audience, said.

At the end of the pageant-like press conference, nobody ended winner.

“Women are not empowered by making them a spectacle in the crowd,” De Jesus, in a statement, added.  SFM