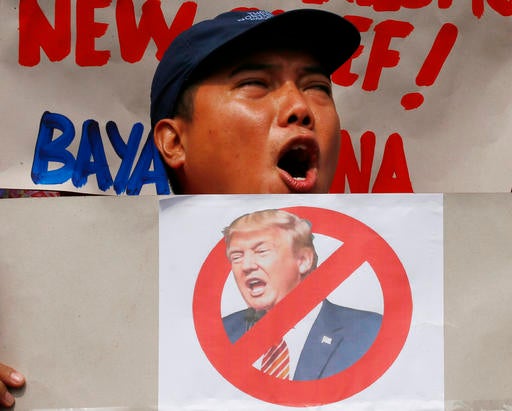 A protester shouts slogans while displaying an anti-Trump placard during a rally at the US Embassy to coincide with the inauguration of President-elect Donald Trump as the 45th President of the United States Friday, Jan. 20, 2017 in Manila, Philippines. Left-wing and Muslim activists have asked President Rodrigo Duterte in a noisy protest to keep his promise of charting a foreign policy independent of America by staying away from U.S. President-elect Donald Trump. AP PHOTO

Even before his inauguration to be the 45th chief executive of the United States, President-elect Donald Trump was warned by militant groups to keep his hands off the Philippines in the first protest in the country against him.

Protesters, led by militant group Bagong Alyansang Makabayan (Bayan), burned a US flag with Trump’s face in a rally staged near the US Embassy on Friday.

They also chanted “Dump Trump” and had a trash bin with a cut-out of the president-elect’s face.

Around 200 protesters, including several Filipino-Americans, attempted to reach the Embassy from T.M. Kalaw Avenue, but were barred by police.

Bayan secretary general, Renato Reyes Jr., warned that Trump is a threat not only to the United States, but for all citizens worldwide.

“This protest is in solidarity with the American people, because their incoming president is a fascist and a racist who is against immigrants,” he said. “Trump will uphold the interests of the businessmen, not the people.”

The United States has been a historic ally of the Philippines, where present treaties allow for military exercises between the two countries.

“Six months in, President Duterte’s pronouncements on independent foreign policy remain as pronouncements,” Reyes said. “We challenge the President to shape up… that he will not let Trump dictate his actions.”

Addressing comments on the comparison between the two leaders, he called it “superficial,” saying that Trump is a billionaire businessman, while Duterte is still part of the middle class.

“Perhaps the comparison only comes from their manner of speaking,” Reyes noted. Both leaders are known for their controversial statements and adversarial attitude to journalists and the press.

The militants also challenged Mr. Duterte to remove all US troops in the country, and junk the Visiting Forces Agreement and the Enhanced Defense Cooperation Agreement.

Women’s group Gabriela hit on Trump’s sexist remarks against women and raised concern for the millions of migrants, both documented and undocumented, living in the United States.

Monique Wilson, global director of One Billion Rising Movement, recalled that the president-elect is accused as a sexual molester.

“Trump endangers women from around the world,” she said. “He is not only a symbol of capitalism, but of patriarchy, racism and sexism.”

Since Trump won the presidential election in November, several racial and discriminatory attacks have been recorded in the United States, some directed toward Filipinos and Filipino-Americans.