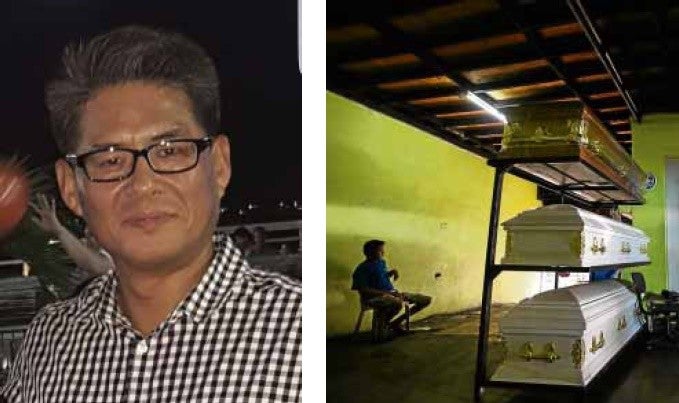 “We are all very sad,” said Lee Sheng-kae, vice president of the Angeles Korean Community Association. He said some Koreans joined Jee’s family in prayer on Wednesday night.

He described Jee as helpful and kind, hiring many Filipinos for his manpower business after he resigned from South Korean firm Hanjin.

His abduction sent shock waves in the tightly knit Korean community here. Security measures in their business establishments and residences were heightened after news of Jee’s abduction spread.

The abduction and killing of Jee was the first of a Korean in the city, it was learned.

The Angeles police said they were not aware of the “Tokhang” operation led by the main suspect, SPO3 Ricky Sta. Isabel, who had surrendered to the National Bureau of Investigation.

Supt. Sydney Villafor, Angeles police director, said  kidnapping-for-ransom charges had been filed against Sta. Isabel, who had resigned from the Philippine National Police’s Anti-Illegal Drugs Group based in Camp Crame.

An Inquirer source said one of the suspects was Ramon Yalung, a resident of Mabalacat City in Pampanga province, who reportedly owned the car used in the abduction. He remains at large.

Angeles City Mayor Edgardo Pamintuan said he learned about the kidnapping in November when a top official of a Korean firm went to see him and asked for help to find Jee.

On Nov. 20, the Korean official asked for updates and Pamintuan mentioned the recovery of the bodies of three Koreans from the FVR Megadike in Bacolor town, south of Angeles City, on Oct. 11.

The Korean clarified that these victims were not associated with Jee.

Chief Supt. Aaron Aquino, Central Luzon police director, said a court in Angeles City, where the kidnapping case was filed, had not yet issued an arrest warrant for Sta. Isabel and the other suspects. —TONETTE OREJAS