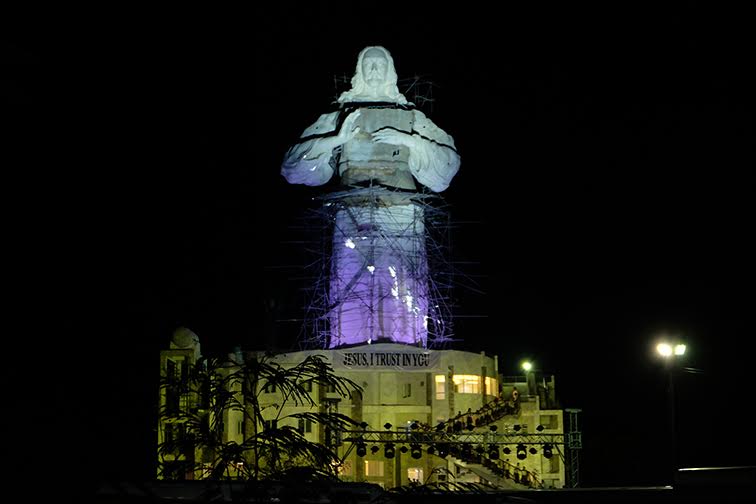 The 100-foot Divine Mercy statue in Marilao, Bulacan. (Photo by Ray Lagarde, featured in www.cbcpnews.com and the Facebook page of CBCP News)

MARILAO, Bulacan – The tallest Divine Mercy statue in the country was unveiled on Thursday evening as one of the highlights of the five-day World Apostolic Congress on Mercy.

Bishop Martin Uzoukwu of Minna, Nigeria, presided over the Holy Mass at the National Shrine of the Divine Mercy before blessing the 100-foot statue and the 50-foot building that accompanies it.

Originally, Malolos bishop Jose Oliveros was supposed to bless the looming figure but was too weak to do so, because of his illness, prostate cancer.

Oliveros, however, took time to deliver the homily at the Mass presided by Uzoukwu.

Fr. Prospero Tenorio, WACOM Asia secretary-general, was behind the idea of building a Divine Mercy statue that will be bigger than the existing 50-foot statue in Cagayan de Oro.

Tenorio said it was his dream to put up the immense structure as the fourth shrine rector and parish priest of the National Shrine of the Divine Mercy.

The towering figure looms over the National Shrine of Divine Mercy in Marilao, Bulacan, as if greeting and watching over devotees and pilgrims.

“I want the people visiting here to be inspired by the statue and feel God’s mercy through His reminder to live out the spirituality of Divine Mercy,” he said.

The five-day WACOM, which is being held in the Philippines, is a gathering of more than 5,000 Divine Mercy devotees all over the world.

The devotion to Jesus as the Divine Mercy is based on the writings of St. Faustina Kowalska, an uneducated Polish nun who penned a 600-page diary of the revelations on God’s mercy.

Tenorio said the statue would be a lasting legacy of how Bulacenos cooperated to have it built.

“I want them to say, ‘I was part of building that statue with my little contribution,’” he said.

Work on the statue began last year, with the progress already at 70 percent as workers still have to do final touches in the neck and shoulders.

“The structure is already finished but we still have to install some fixtures,” Tenorio said.

Contributions for the statue’s P90 million budget came from personal donations and prayer cards. The shrine has already spent P43 million for its construction.