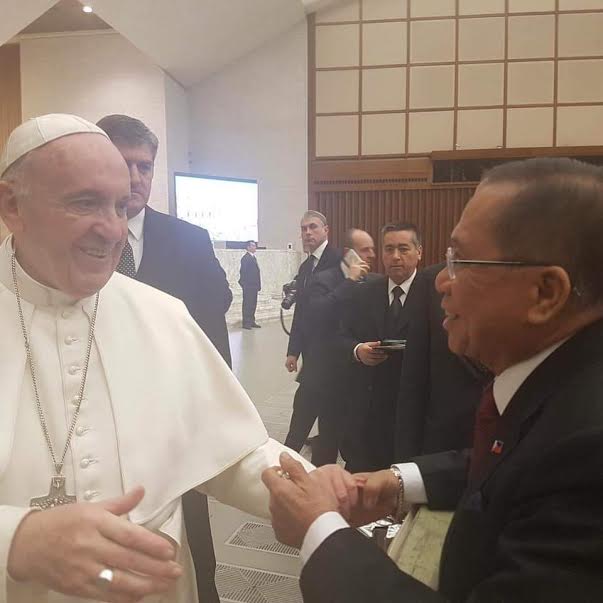 ROME – Several members of the Philippine government delegation to the third round of peace talks with the National Democratic Front of the Philippines went to the Vatican to see Pope Francis on Wednesday and deliver President Duterte’s message to the Pontiff.

Leading the delegation were chief government negotiator Jesus Dureza; Assistant Secretary Dickson Hermoso of the Office of the Presidential Adviser on the Peace Process; and peace panel member Hernani Braganza.

The government officials also carried with them a letter from President Duterte to the Pope.

“Our countrymen remember your Holiness’ apostolic visit in 2015 with deep appreciation, knowing that it was made with the most sincere regard for the welfare of the Church’s flock,” Duterte’s letter said.

“The Philippines values its special relations with the Holy See and regards with gratitude your Holiness’ gracious stewardship of the Catholic faith,” Duterte said.

Duterte also declared his high respect for the Pope in his letter.

“Please accept, your Holiness, the assurances of my highest esteem and respect,” Duterte said.

Both the Duterte Administration and NDFP are set to meet for the third round of talks in Rome from January 19 to 25.

They are expected to resolve certain issues, including the Comprehensive Agreement on Social and Economic Reforms, release of political prisoners and a bilateral ceasefire agreement.  SFM