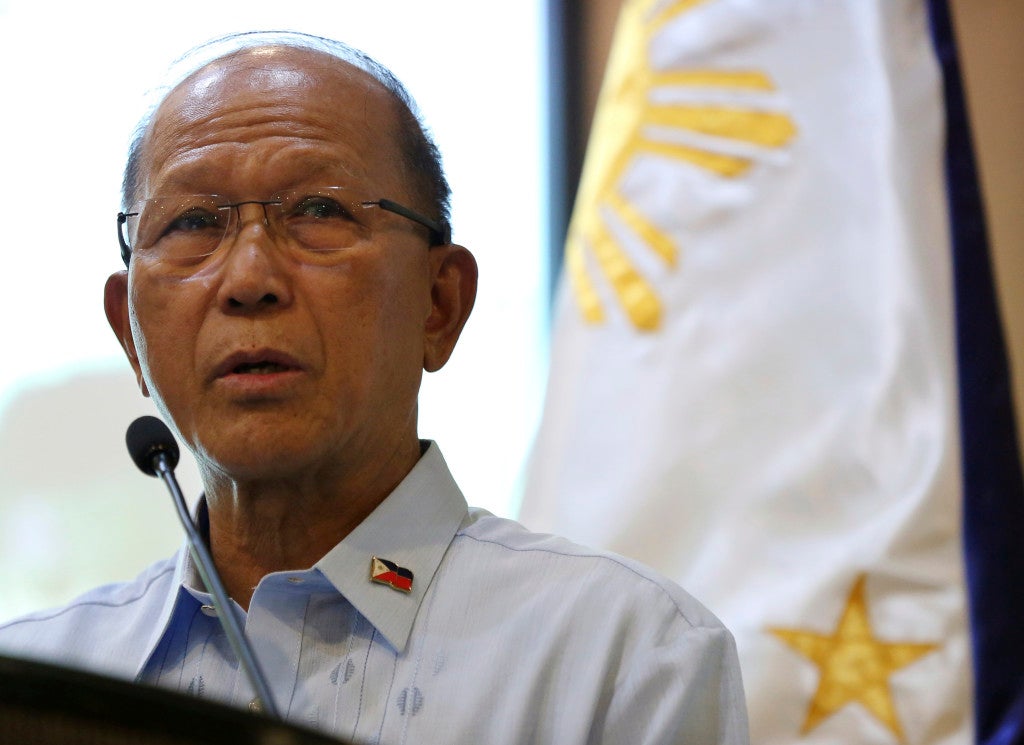 The Department of Foreign Affairs sent a note verbale to the Chinese Embassy last month after confirming a report from the US-based Center for Strategic and International Studies about China’s arms buildup in the Spratlys.

“The actions of China in militarizing those disputed features are very troubling,” Lorenzana said in a statement. “They do not square with the Chinese government’s rhetoric that its purpose is peaceful and friendly.”

“The Philippine government would be remiss in its duty to protect its national interest if it does not protest, question and seek clarification from China on the presence of weapons in the Spratlys,” he said.

He took a stronger line than Foreign Secretary Perfecto Yasay, who refrained from criticizing China on Tuesday but said the issue had to be handled carefully and the public should know “we are not sleeping on the job.”

“When something happens that can pose us some kind of threat to our sovereignty rights, we issue a note verbale so we can talk about it and make sure it is properly addressed,” Yasay said.

With billions of dollars of potential Chinese trade and investment at stake, the Philippines has a difficult balancing act in upholding its sovereignty claims while staying on the better terms that President Duterte has established with historic rival China.

The Asia Maritime Transparency Initiative (Amti), a US think tank, has also said it has been tracking construction of hexagonal structures on Kagitingan (Fiery Cross), Panganiban (Mischief) and Zamora (Subi) reefs since June and July last year. China has built airstrips on these islands, capable of accommodating large military aircraft.

It said China has placed modern weapons on Panganiban, which is located within the Philippines’ 200 nautical mile exclusive economic zone (EEZ).

Lorenzana said some of the reclaimed areas mentioned in the Amti report were within the country’s EEZ. The Permanent Court of Arbitration ruled in favor of Manila in July last year, saying Beijing had no historical title to the vast maritime region.

For its part, the Philippines has decided to shelve planned upgrades to facilities on islands it controls, such as repairing an eroded runway, to avoid incurring China’s wrath.

Lorenzana said a diplomatic protest was the correct procedure and despite warming relations with China, the government still had a duty to protect the national interest.

China claims most of the South China Sea, through which about $5 trillion of goods passes annually. An international arbitration ruling last year invalidated those claims.

China’s artificial islands became a hot issue last week when the US nominee for Secretary of State, Rex Tillerson, told a Senate hearing that Beijing should be repelled from, and then denied access to, the controversial islets.

Yasay last week suggested Manila would play no part in that, and said of the United States, “Let them do it”. —WITH THE WIRES