DAVAO CITY — President Duterte urged the United States, China, Russia and other dialogue-partners of the Association of Southeast Asian Nations (Asean) not to meddle in the affairs of the regional bloc as the Philippines formally assumed the chairmanship of the Asean.

Dressed in barong Tagalog, Mr. Duterte was uncharacteristically staid when he delivered his 12-minute remarks reading a prepared speech, deviating from his usually impromptu profanity-laden talk.

“I also call on Asean dialogue-partners to renew their dedication to the valued purposes and principles stated in the Treaty of Amity and Cooperation, including non-interference, in promoting regional peace and stability through abiding respect for the rule of law,” the President said, slightly raising his voice to emphasize the word “non-interference.”

“Now, more than ever,” he said, “it is a time for real change through constructive engagements. We are in this journey together.”

He continued: “I say to you today in full humility: the Philippines – as Asean chair- will remain steadfast in upholding the ideals and values we hold dear and in working for the realization of our shared aspirations. We are committed to the building of a strong and resilient Asean community.”

Just seven months into his six-year term, the tough-talking President has caused ripples in the international political arena with his regular verbal tirades against the US, the United Nations and the European Union for criticizing his bloody war on drugs. 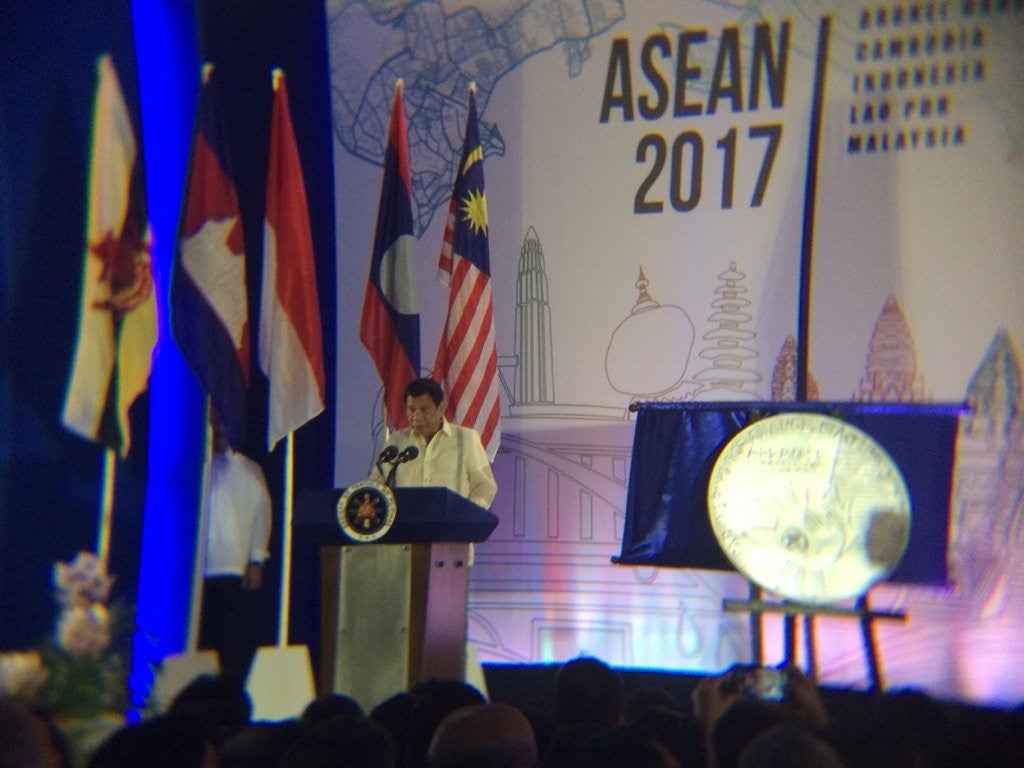 President Rodrigo Duterte at the launch of the country’s chairmanship of the 2017 Association of Southeast Asian Nations (Asean) summit. JEANNETTE ANDRADE/PHILIPPINE DAILY INQUIRER

The Chief Executive also raised not a few eyebrows when he announced during his visit in Beijing the country’s “separation” from the United States, the country’s longest ally, and his decision to cozy up with China and Russia.

Mr. Duterte said the annual meeting of the Asean, now marking its 50th foundation year, has been a “golden opportunity” for the 10 member-states to come together in working for a regional organization “that has taken its firm and secure place in the community of nations: An ASEAN that has its own significant role in effecting positive change for our world.”

He said the gathering was a chance for the Asean members to “reaffirm the shared aspirations and values which will lead Asean to the future our peoples deserve.”

Faced with the increasing threats of cross-border crimes such as terrorism and drug trafficking, Mr. Duterte said the regional bloc should work together to make Southeast Asia “a region that promotes and maintains peace, security and stability.”

“Today in Davao City, let us renew the solemn pledge to do all we can for the very core of our national and regional interests: our peoples. For an Asean citizen, the Asean community must provide opportunities for a truly better life,” he stressed.

Added the President: “It is a landmark in Asean’s continuing positive narrative. It is an event to renew the enduring ties that bind us all as Asean member-states.”  SFM