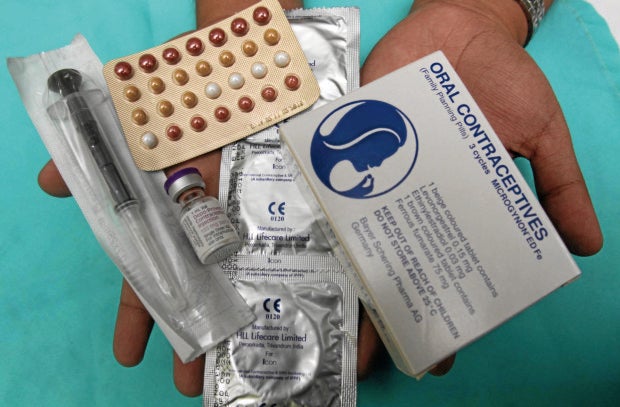 FAMILY PLANNING President Duterte’s ExecutiveOrder No. 12 seeks to ensure women’s free access to contraceptives like those shown by an organization promoting family planning in this Dec. 18, 2012, photo. —JOAN BONDOC

The United Nations Population Fund (UNFPA) on Friday hailed President Rodrigo Duterte’s intervention to provide free contraceptives to poor women as a “new momentum” in the provision of family planning services in the Philippines.

But Executive Order No. 12, signed by Mr. Duterte on Monday, faces hurdles, with conservatives and religious leaders preparing possible challenges.

In a statement issued late on Thursday, the UNFPA said Mr. Duterte’s order was a “major push” for the government’s family planning program, which has been hindered by opposition from the Catholic Church and prolife organizations.

“The full and immediate implementation of the Responsible Parenthood and Reproductive Health Law is critically important for the government to deliver on its family planning program,” said Klaus Beck, UNFPA country representative.

Beck said Mr. Duterte’s order would “lend new momentum to the implementation of the law as it demonstrates the highest level of support to the measure.”

Mr. Duterte issued the order on Monday, directing government agencies to ensure free access to contraceptives for 6 million women who could not obtain them because of poverty.

According to EO 12, out of the 6 million women with unmet needs for modern family planning, 2 million have been identified as poor.

The 2 million women should have access to contraceptives by 2018, and all the rest thereafter, the order said.

EO 12 also directed government agencies to locate couples with unmet family planning needs, mobilize agencies up to the village level and partner with civil society in intensifying the drive.

Mr. Duterte’s directive did not mention a Supreme Court order issued in June 2015 restraining the Department of Health (DOH) from distributing a contraceptive implant that opponents of the RH law considered abortifacient.

The Supreme Court also directed the Food and Drug Administration (FDA) to put on hold the renewal of licenses for  other contraceptives, directing the agency to call public hearings as part of the licensing process.

The government has appealed the ruling.

“The government cannot continue to tolerate this delay in judgment because time is of the essence as far as the implementation of the [RH] law is concerned,” Pernia said on Wednesday.

He said 11 Filipino women die each day from complications of pregnancy and delivery and the law would reduce maternal deaths and teen pregnancies in addition to enabling families to have the number of children they want.

In its statement on Thursday, the UNFPA expressed concern that the Supreme Court order might hinder full implementation of the RH law, but said it would support the government and its civil society partners in the provision of reproductive health services.

“[The] UNFPA has been working with local governments in ensuring that access to quality reproductive health services, including family planning, will be available, especially for the poorest and disadvantaged communities who need these services most,” it said.

Juan Antonio Perez, executive director of the DOH’s Commission on Population, on Wednesday said if the contraceptives were made available to the 6 million women with unmet family planning needs, contraceptive prevalence rate would increase to 65 percent, from the current 40 percent.

The Philippines’ population, now at 104 million, is growing at a rate of around 1.7 percent yearly, but the growth may be lowered to 1.4 percent if the family planning campaign is fully implemented, Perez said.

About 25 percent of the population live in poverty. Millions of poor women have no access to contraceptives partly because the government’s family planning program runs on a shoestring budget of P500 million.

This could change, however, as EO 12 directs government agencies to put in funds for the family planning program in their 2018 and 2019 budgets, Perez said.

That would enable the government’s family planning budget to increase four-fold to the ideal level of P2 billion, he said.

Conservatives view Mr. Duterte’s intervention as a circumvention of the 2015 Supreme Court order.

Atienza is the representative in the House of the prolife party-list group Buhay.

He said his group would study EO 12 “word for word, phrase by phrase,” and “if illegal, we will question it” in the Supreme Court.

The Catholic Bishops’ Conference of the Philippines (CBCP) said it remained opposed to contraception despite the poverty-reduction intent of Mr. Duterte’s order.

The bishops criticized what they described as Mr. Duterte’s “antilife” measures, calling on people to join a “grand procession” next month to make a stand.

“When society opens its doors to welcome artificial contraception, abortion, divorce, legalized same-sex union, it opens the minds of people to a particular mindset that problems can only be resolved through termination of relationships, terminations of persons,” the CBCP’s Episcopal Commission on the Laity said. —WITH REPORTS FROM THE WIRES