Abe thanks Duterte for naming PH eagle in his honor 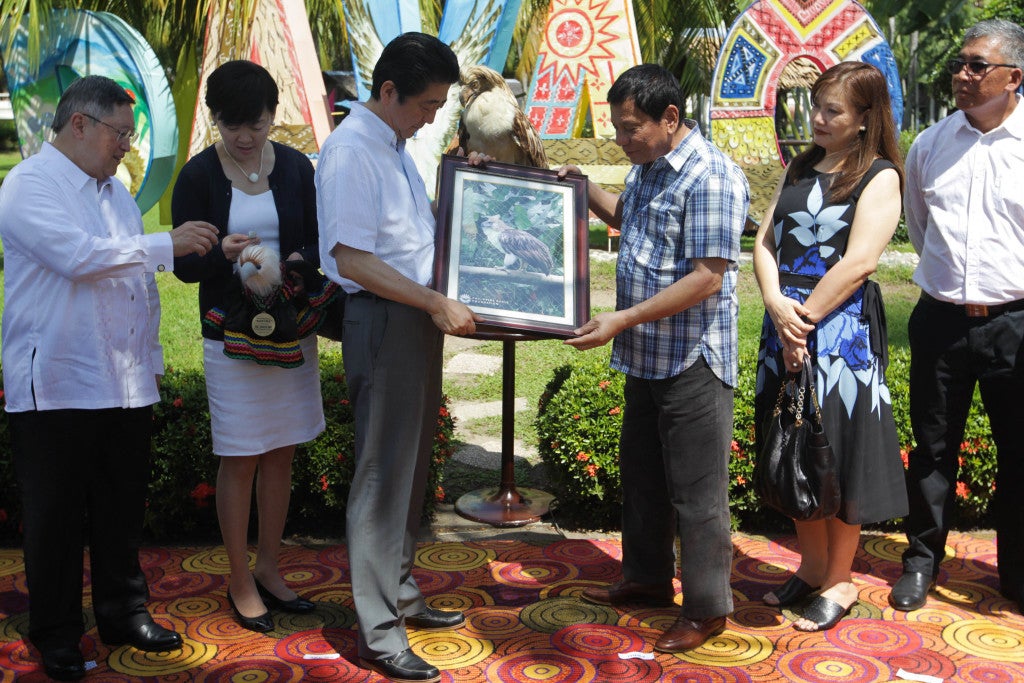 President Rodrigo Roa Duterte gives Japan Prime Minister Shinzo Abe a framed photo of ‘Sakura’, the Philippine Eagle named during a ceremony at Waterfront Hotel in Davao City on January 13, 2017. The name was Japanese-inspired after the Prime Minister of Japan provided support to the Philippine Eagle Foundation, the organization that takes care of the endangered species. SIMEON CELI JR./Presidential Photo

Braving the sweltering midmorning heat, Abe and his wife Akie received a Philippine eagle stuffed toy as it would be difficult to bring the 2-year-old bird, officially named Sakura, from its sanctuary at the Philippine Eagle Center to the ceremony held at the Waterfront Hotel.

READ: PH eagle to be named Sakura in Abe’s honor

Besides the eagle doll, the President also gave a framed photo of Sakura, the Japanese word for cherry blossoms, Japan’s iconic flowering tree.

Abe, the first head of state to visit the President’s hometown, had a meeting with Duterte before the event.

The Japanese Prime Minister also visited the President’s modest home in Dona Luisa Subdivision in Matina District where they had breakfast of Filipino delicacies.

They likewise briefly met with a group of Filipino and Japanese business leaders.

Abe, who arrived here on Thursday night, wrapped up his two-day state visit with a luncheon also hosted by Duterte.

The Boeing 747 carrying Abe and his delegation took off from Francisco Bangoy International Airport before 1 p.m. RAM