Abe to have breakfast at Duterte's home in Davao City, meet with traders | Global News

Abe to have breakfast at Duterte’s home in Davao City, meet with traders 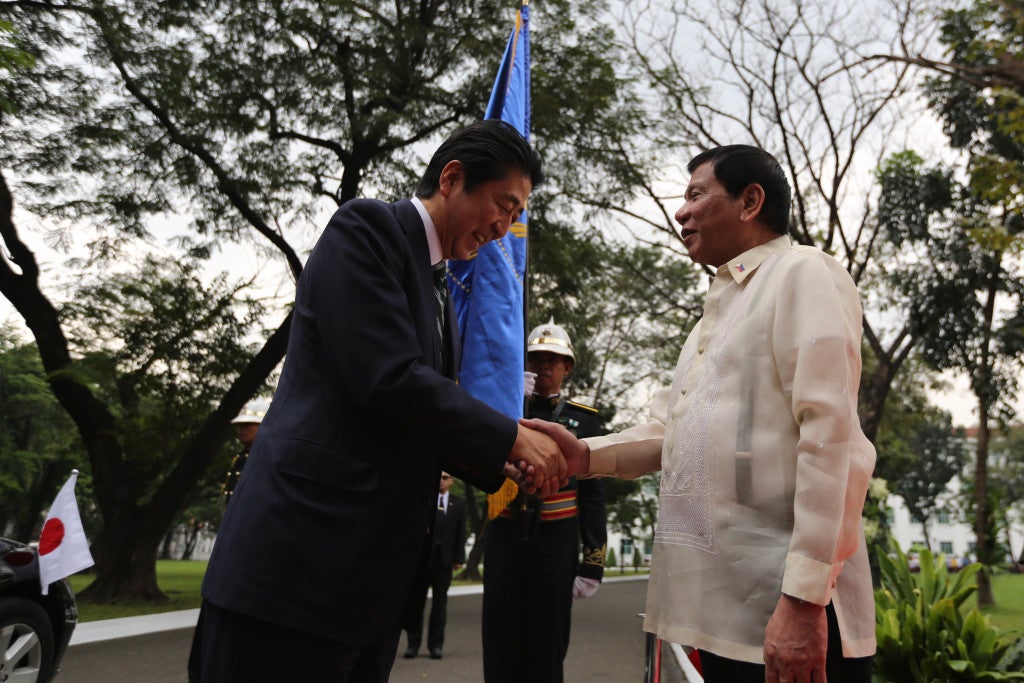 President Rodrigo Roa Duterte welcomes Japanese Prime Minister Shinzo Abe to the Malacañan Palace on January 12, 2017. The Prime Minister of Japan is scheduled for a two-day visit to the country. KING RODRIGUEZ/Presidential Photo

Abe will then join Mr. Duterte in a meeting with a group of businessmen at the Waterfront Hotel on the same day.

Abe arrived here on Thursday evening as part of his two-day state visit to the Philippines.

Amid tight security, the Boeing 747 aircraft carrying Abe, his wife Akie and their official delegation landed at the Francisco Bangoy International Airport at about 9:40 p.m.

Besides being the first foreign head of state to visit the country since Mr. Duterte took office in June 2016, the Japanese leader is also the highest ranking foreign public official to set foot in the President’s hometown.

A smiling Abe waved at the group of journalists and local government officials, led by Compostela Valley Gov. Jayvee Tyrone Uy, as soon as he stepped out of the airplane.

The Japanese prime minister was welcomed by a group of ethnic dancers before he and his wife boarded a Lexus sports utility vehicle.

Abe, who hosted the President in his state visit to Tokyo last October, is set to join Mr. Duterte in a meeting with a group of businessmen at the Waterfront Hotel on Friday.

He is also expected to have breakfast with the Chief Executive at the latter’s Matina District home on Friday morning.  Abe earlier noted that Duterte had apparently enjoyed Japanese food when he visited Tokyo in October.  SFM