Japanese Prime Minister Shinzo Abe on Thursday supported the Philippines’ decision to reach out to China for a peaceful resolution of the two countries’ dispute in the South China Sea as he affirmed the close ties between Tokyo and Manila after a meeting with President Rodrigo Duterte in Malacañang.

His Philippine visit is part of a four-country swing that includes visits to Australia, Indonesia and Vietnam.

Abe promised over $8 billion in official development assistance and private sector investment in the Philippines over the next five years, and to continue participating in peace and development efforts in Mindanao.

He also pledged support for Mr. Duterte’s campaign against illegal drugs, particularly in the rehabilitation of users.

In a joint statement with Mr. Duterte issued in the Palace, Abe said the Philippines and Japan would cooperate to bring stability and prosperity to the region.

The South China Sea dispute is linked to regional peace and stability, and a concern to the entire international community, Abe said.

“I welcome the fact that President Duterte is making efforts to improve Sino-Philippine relations in light of the arbitral award,” he said, referring to the Philippines’ victory over China in the UN-backed Permanent Court of Arbitration in The Hague that last year invalidated Beijing’s claim to almost all of the South China Sea.

Abe stressed the importance of the rule of law, the peaceful resolution of disputes and nonmilitarization, which he said had been confirmed in meetings of the Association of Southeast Asian Nations.

“We affirm the importance of these,” he said.

He said Japan would create business opportunities in the Philippines through official development assistance and private investments of 1 trillion yen (about P400 billion or $8.7 billion).

In his message, Mr. Duterte said the Philippines and Japan were seeking to strengthen their economic cooperation and he had instructed government agencies to look for new areas of collaboration. —WITH REPORTS FROM THE WIRES 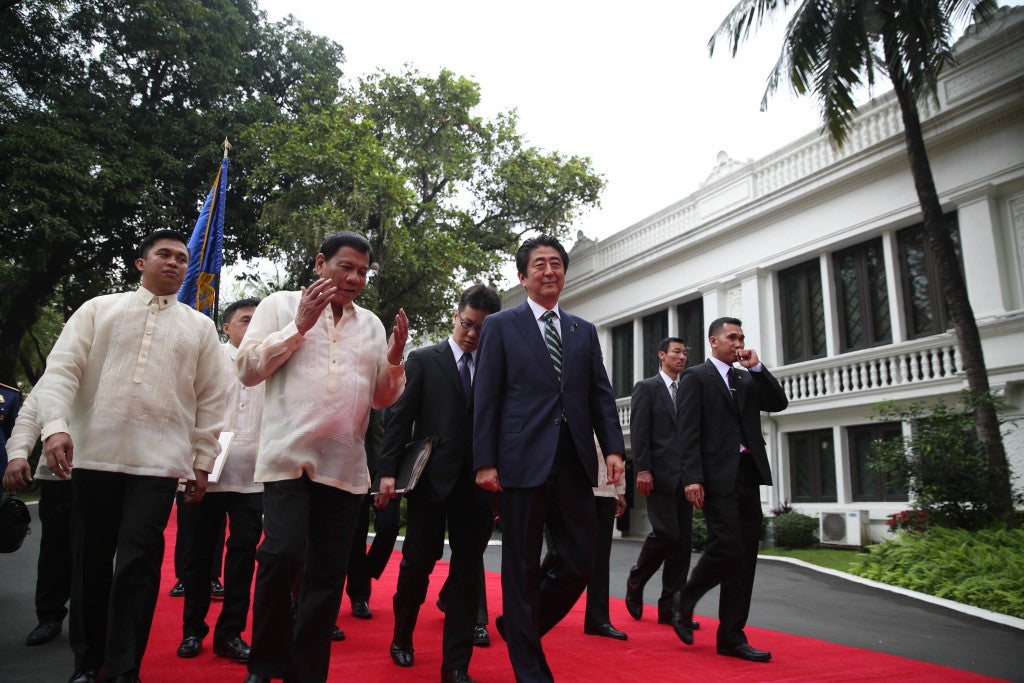