Metro already under threat from effects of climate change – study 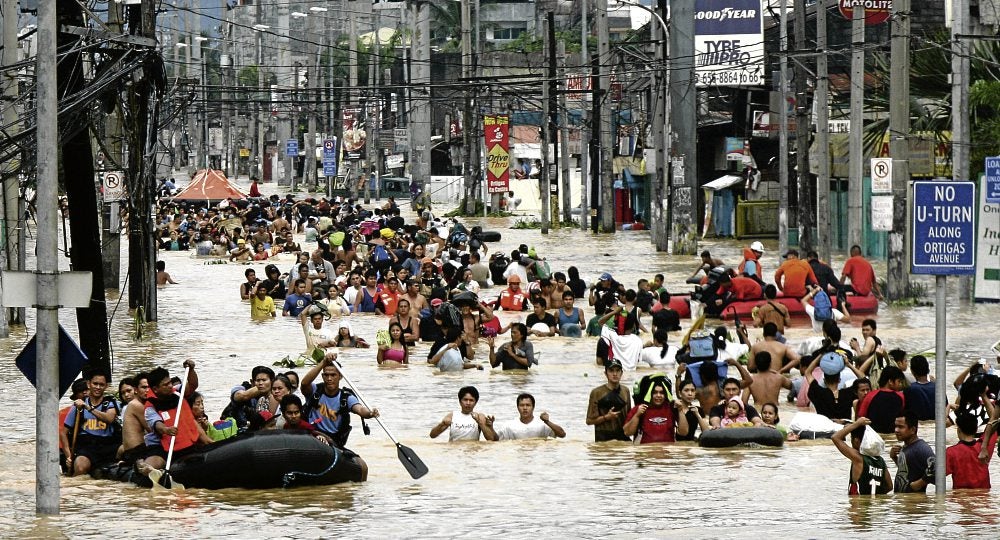 Rescuers ferry stranded residents from their houses due to floods caused by Tropical Storm Ondoy along Ortigas in Cainta Rizal in September 2009. Nearly 60 people were killed, Manila was blacked out and airline flights were suspended as a powerful storm battered the main Philippines island of Luzon on a weekend, disaster officials said. INQUIRER PHOTO/EDWIN BACASMAS

(EDITOR’S NOTE: This article is the final research paper of the graduate class on humanitarian reporting under Prof. Reynaldo Guioguio of the UP Diliman College of Mass Communication.)

MANILA — Unlike in some parts of the world where the reality of climate change is still being debated upon and sometimes even questioned, in the Philippines, its effects have been felt more profoundly in different parts of the country.

In Yolanda alone, non-government organization Germanwatch placed the damage to property and the country’s economy to be at least P650 billion ($13 billion), that is aside from the deaths of more than 6,000 people.

FEATURED STORIES
GLOBALNATION
US donates $18M worth of weapons system to PH to fight terrorism
GLOBALNATION
PH can secure up to 60 million doses from 3 pharma firms by next year—Galvez
GLOBALNATION
Top Trump aide tells PH: US ‘not leaving’ alliance whether next White House occupant is his boss or Biden

Metro Manila was not spared from the destruction caused by typhoons and habagat. The government estimated the lost cost by Typhoon Ondoy, which struck the capital in 2009, to about P11 billion.

With unusual changes in weather patterns and disturbances, experts agree that the threat in the Metro caused by climate change is real.

The Partnerships in Environmental Management for the Seas of East Asia (PEMSEA) has identified the following phenomena as major environmental issues and challenges, which will arise as a result of climate change: tropical cyclones, flooding, coastal erosion and land subsidence. These weather phenomena can be expected to result further in temperature changes and sea level rise.

With the increase in sea level, coastal cities of Metro Manila such as the Camanava area (Caloocan, Malabon, Navotas and Valenzuela), are faced with the possibility of having several, if not huge portions of their communities submerged.

Meanwhile, as early as 2007, experts from the Japan International Cooperation Agency (JICA) have warned policymakers in the country of the possible catastrophic impact of climate change, particularly sea-level rise in Metro Manila. They have also recommended measures which can mitigate the impact of climate change in the capital’s low-lying areas.

For Giovannie Antonious Reyes, the reality of land subsidence is something close to home. He has been involved in the local government’s efforts in mitigating the impact of climate change in his community.

“Aware kami kasi palaging binabaha ang Malabon kapag may bagyo o pag-ulan kasi nga nasa below sea level kami  (We are aware of the problem because Malabon always gets hit by floods during typhoons or just heavy rains as it is below sea level),” said Reyes. While not familiar with the actual measure of land being lost to the sea, he added that they have long known how their community has lost some of its soil to the sea. “Yearly bumababa ang land sa Malabon (Yearly, the level of land in Malabon goes down),” he added.

These joint efforts involving the CENRO, DPWH, PNP, BFP and other agencies, he said, have resulted in the cleaning of water passageways (esteros), river channels, canals, and other areas which if obstructed, could cause or contribute to heavy flooding. These initiatives, he added, have become parts of the city government’s efforts to minimize the effects of land subsidence.

Aside from the Camanava, the JICA study identified the Pasig-Marikina River System as another area in Metro Manila which may be affected drastically by the effects of climate change.

Communities in the cities of Mandaluyong, Manila, Marikina, Quezon, San Juan, Antipolo, Cainta, Rodriguez, San Mateo and Pasay, experience flooding due to excess runoffs, which overflow from banks of both the Pasig and Marikina rivers.

JICA funded a flood control project in the area, which is now known as the Pasig-Marikina River Channel Improvement Project. The project’s construction and design was based on anticipated changes in the area’s flood patterns in the 30 years following its initial year of use.

The Mangahan Floodway, which straddles a portion of the Marikina River, also aids in the control of excess flood water in the area. With the facility, excess water is diverted to Laguna de Bay instead of allowing to flow into other cities of Metro Manila such as Taguig, Pateros, Taytay, Makati and Pasig.

These findings, which also take into consideration the existing public flood-control infrastructure of the time, communicated a sense of urgency then to policymakers and leaders in the Philippine government.

In 2012, PEMSEA released a study similar to that conducted by JICA, which highlighted the need for government to address the risks posed by climate change to Metro Manila.

Cognizant of the need to expand the coverage of disaster risk reduction and management preparation to management of communities, their study covered not only sea-level rise but also risk scenarios and sea use planning.

Echoing the JICA study, the PEMSEA paper said Metro Manila’s coastal areas along Manila Bay risk inundation due to sea level rise. This increase in the water level is due to global warming rate of subsidence and storm surges, which result from intense tropical storms and typhoons.

Despite its warning, the partnership program, composed of the United Nations Development Programme (UNDP) and the United Nations Office for Project Services (UNOPS) and implemented in the Philippines via the Department of Environment and Natural Resources (DENR), has admitted that while they are certain of sea level rise, they are unsure as to its timing.

Similar to the proposal forwarded by JICA, PEMSEA also recommends the adoption of climate change adaptation (CCA) and disaster risk reduction (DRR) strategies for coastal communities, particularly in their use of the areas, which are identified to be at risk. Information on these areas, they also recommended, should be constantly updated to prevent avoidable damage and loss of life.

The study identifies land use as an important factor in ensuring the safety of communities from the effects of climate change. To ensure widespread and official adoption by agencies of a climate-sensitive land use plan, PEMSEA suggests that policies be passed by government, ensuring proper implementation and regulation of identified areas in Metro Manila.

The Commission, headed by the President, with three commissioners appointed to six-year fixed terms, is mandated to formulate a strategic framework on climate change, which will be the basis for climate change planning, research and development, monitoring of impacts of climate change in the country and information and knowledge management.

The commission is also charged with recommending legislation pieces to Congress, policies for offices in the executive branch of government and formulating programs and securing appropriations for climate change adaptation and mitigation strategies.

Under the National Framework Strategy on Climate Change (NFSCC), the Philippine government plans to pursue a roadmap, which will be based on the attainment of the country’s sustainable development goals (SDGs), with recognition of the governance and institutional factors that affect the country’s ability to adapt to the impact of climate change.

The framework recognizes adaptation which requires resources and the cooperation of various stakeholders from different segments of society. This strategy also recognizes the reality that climate change adaptation goes farther than the impacts of climate change, acknowledging economic targets and sustainability.

The NFSCC was formulated by the commission with consideration of the impact of climate change in the Philippines: increasing temperature, sea level rise, changing rainfall patterns and extreme weather events. These phenomena are expected to affect the country’s food sources, water supply, public health, social infrastructure, energy sources and the society at large.

Under the NCCAP, the commission outlined the climate change adaptation and mitigation priorities for 2011 to 2028. These priorities cover food security, water sufficiency, ecosystems and environmental stability, human security, climate-smart industries and services, sustainable energy and knowledge and capacity development.

These strategic priorities under the action plan and intended to “build the capacities of women and men in their communities, increase the resilience of vulnerable sectors and natural ecosystems to climate change, and optimize mitigation opportunities towards gender-responsive and rights-based sustainable development.

The commission also acknowledged the complementing relationship between climate change and disaster risk management, with the ultimate goal of reducing the risks of dangers posed by extreme weather events, as well as the effects of rising temperatures, changing rain patterns and sea level rise.

Among the recent campaigns of the commission is the country’s ratification of the Paris Agreement, an international commitment promoted by the United Nations Framework Convention on Climate Change (UNFCCC), which is intended to address the threats posed by climate change on the global population.

Slated to be adopted by members of the United Nations by 2020, the Paris Agreement has become a flashpoint for local political camps in the Philippines when President Rodrigo Duterte made statements opposing the covenant.

In July 2016, Duterte said the agreement would limit the industrialization of developing countries such as the Philippines, keeping the nation’s population struggling with restricted economic activities and employment opportunities.

By November, however, Duterte changed his mind after a meeting with his Cabinet. He retained his doubts though on the agreement because of the lack of sanctions on countries which might renege on their commitment.

Adopted by 196 countries in Paris after the UN Climate Change Conference Paris 2015 or COP21, the agreement lapsed into international law last Nov. 4. Being an international covenant, the Philippine Constitution requires its ratification by Congress and the signature of the President before it will be considered as binding with the Filipino nation.

It remains to be seen if the President will honor his statement of signing the agreement in the coming months. Congress has also yet to make a commitment to ratify the covenant. And while these policymakers and national leaders have yet to bind us to a commitment to limit the causes of climate change, the effects of climate change now slowly eat away at the coastlines of Metro Manila, slowly taking away the soil of communities in Caloocan, Malabon, Navotas and Novaliches by ebb and flow; causing heavier than usual rains in San Mateo, Cainta and Montalban; and causing floods in Marikina and Quezon City.  The endangered communities in Metro Manila can only prepare themselves for what climate change might bring in the coming months and years.  SFM