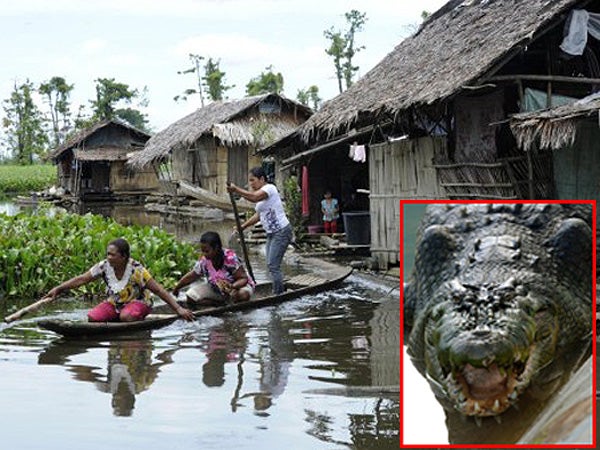 BUNAWAN—Deep inside the Philippines’ largest marshland, tribespeople who once revered crocodiles as mystical creatures say they now feel terrorized by them.

Reports of attacks on people and livestock have become more frequent and tensions reached a peak last month when a three-week hunt netted what is believed to be the world’s biggest crocodile ever captured.

“There used to be a time when crocodiles would swim near our boats, but move away when we made noise,” village chief Rudy Ayala told Agence France-Presse while patrolling the spectacular Agusan marsh in the southern Philippines where his Manobo tribe has lived for generations.

“Now they have become dangerous and are eating our animals and attacking humans. The bigger ones must be removed because they must have developed a taste for us.”

Ayala is head of a village of a few hundred people who live on wooden house boats at Lake Mihaba, part of the 15,000-hectare (37,050-acre) Agusan marshland that is one of the Philippines’ most ecologically significant wetlands.

As they have for decades, the villagers travel on small dug-out canoes, sustaining themselves by fishing and hunting for large carp, snails and other marine life.

Folklore about mystical reptiles containing spirits of tribal ancestors still abounds, with the elders saying they once peacefully co-existed with the crocodiles, the top predators in the area.

But that was quickly changing, Ayala explained as his boat glided through a maze of shallow creeks, lakes and channels.

Reverence turned to fear and hysteria, then anger, after a crocodile bit off a 12-year-old girl’s head as she paddled her way to school in 2009, according to Ayala and other villagers.

Ayala said the mangled remains of Rowena Romano bore jagged bite marks when her body was pulled out of the water, and part of her canoe was torn off by the force of the animal’s powerful jaws.

Then, in June this year, a man from another village on the edge of the marsh went missing, presumably also taken by a crocodile while he was fishing in the wetlands.

There has also been a spate of attacks by crocodiles on water buffalo and other livestock.

Leonisa Daga-as, 42, expressed the sentiments of many villagers in the marshland, saying that the only way to rid the community of the threat was to hunt down all the crocodiles and remove them.

She said her husband had twice survived a “crocodile ambush”.

“The animal followed his canoe and nearly turned it over by chomping on it,” said Daga-as, who is also one of the community leaders.

In response to the growing anxiety the local government of Bunawan town, which has jurisdiction over the area, assembled a hunting party that caught a one-ton, (6.4-meter) 21-foot giant in a dramatic hunt last month.

Named Lolong after one of the trappers who died of a heart attack on the eve of its capture, the beast is now believed to be the biggest crocodile in captivity.

Guinness World Records last month declared an Australian crocodile measuring just under 5.5 meters as the biggest in captivity, saying it would not measure Lolong until it was in “acceptable captivity”.

Lolong belongs to the species Crocodylus Porosus, or the Indo-Pacific crocodile, the world’s largest reptile which experts say can live up to a century.

While not on the brink of extinction globally it is critically endangered in the Philippines, where it is hunted for its hide, which is sought after in the world’s fashion industry.

Rollie Sumiller, an animal science expert at the Palawan Wildlife Rescue and Conservation Center who helped organize Lolong’s capture, said the remote Agusan marsh was one of the best refuges for the crocodiles in the country.

“Because the marsh is largely unspoiled, it is an ideal spot for the crocodiles’ unhampered growth,” said Sumiller.

However with human activity increasing on and around the marshland, Sumiller explained the apparent rise in attacks was due to people encroaching into the crocodiles’ natural habitat.

“They are highly territorial, and once you stray into their territory, they can attack,” he said.

The captured Lolong now spends his days in a pen in Bulawan, where he has become an instant celebrity among locals but not for some animal rights groups who have demanded he be released back into the wild.

They have branded it cruel for a creature used to roaming vast distances to be kept in an area the size of a swimming pool, and point to the fact that he did not eat for more than a month after being caught as proof he is suffering.

However the mayor of Bunawan town, Edwin Cox Elorde, insisted that Lolong would have been killed by the terrified villagers if he had not been caught, and reiterated the animal would not be released.

“It is not cruelty, he is being protected in the pen… we call it a rescue and not a capture,” Elorde said.

He said local authorities were planning to capture more crocodiles and create a nature park for them.

Aside from being a tourist attraction, he said the nature park and Lolong would also hopefully dispel some community fears about crocodiles and show that humans could peacefully co-exist with the animals.

Dutch anthropologist Jan van der Ploeg told AFP that keeping crocodiles in a cage in itself did not educate people, although it could be a start if the Bunawan government also made a genuine effort to protect the species.

“The challenge is to link the crocodile in the cage to the conservation of species in its natural habitat,” said van der Ploeg, who works with the Philippine-based conservation group Mabuwaya Foundation.

“Many people do not know that crocodiles are threatened with extinction and that they are therefore legally protected. It is important to get this message across to the public.”

He cited as an example a conservation project in San Mariano town in the northern Philippines, where the dwindling crocodile population has shown signs of recovery after a decade of public education campaigns.

“The local government of San Mariano declared the Philippine crocodile its flagship species, proclaimed several protected areas and banned the use of destructive fishing methods,” he said.

As a result, they are no longer killed or hunted in the area, and their population has risen from only 12 non-hatchling crocodiles in 2000 to 64 in 2009.

Authorities in Bunawan are giving pamphlets to tourists coming to see Lolong that explain the endangered status of crocodiles and the need to protect them.

However there is no overarching conservation strategy yet for crocodiles in Agusan marsh, only plans to hunt down the next big one.