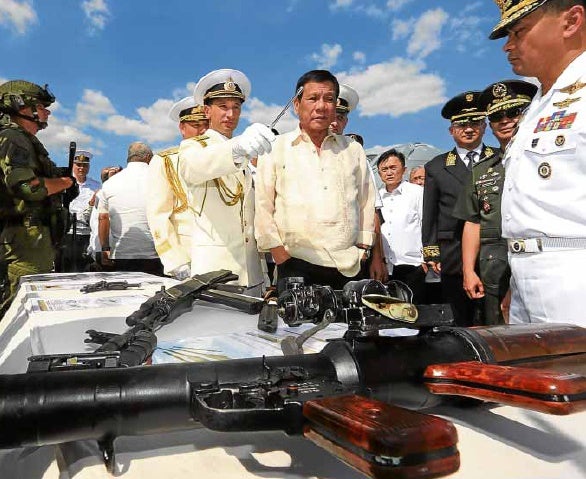 With Cabinet officials in tow, Mr. Duterte toured the Admiral Tributs, a Russian antisubmarine vessel that together with a sea tanker, the Boris Butoma, is on a goodwill visit to Manila.

“We welcome our Russian friends. Anytime you want to dock here for anything, for play, for replenish supplies or maybe our ally to protect us,” Mr. Duterte said while shaking hands with Rear Adm. Eduard Mikhailov, deputy commander of the Flotilla of the Russian Navy Pacific Fleet.

Mr. Duterte’s remarks came a day after Russian Ambassador Igor Anatolyevich Khovaev said his country was ready to supply the Philippines with sophisticated weapons and aimed to become its close friend.

Mr. Duterte has thrown into question the future of the Philippines’ relations with its longtime ally, the United States, with angry outbursts over US criticism of human rights violations in his war on drugs and some scaling back of military cooperation with Washington while taking steps to improve ties with China and Russia.

He is due to visit Moscow in April.

The visit by the two Russian warships to Manila was the first official navy-to-navy contact between Russia and the Philippines.

On Tuesday, Mikhailov said Russia wanted to hold maritime exercises with the Philippines to help combat terrorism and piracy.

“I hope you can come back more often,” he said.

Mr. Duterte and his Cabinet officials also posed for pictures with the Russian Navy officers, who imitated his signature clenched-fist stance.

Wearing a barong Tagalog, Mr. Duterte toured the ship in the company of the Russian Navy officers and Khovaev.

At one point during the hourlong tour, Mr. Duterte looked out from the ship’s deck and pumped his fist in the air.

Mr. Duterte was given arrival honors at Pier 15 of the Manila International Harbor before he boarded the Admiral Tributs.

His tour of the ship included visits to the torpedo platform, missile system at the bow and navigation system on the bridge.

Mr. Duterte was also shown AK-47s, a grenade launcher and a helicopter.

He was seen trying out binoculars.

Lorenzana expressed optimism about “the start of a partnership” between the defense establishments of Russia and the Philippines when he met with Russian Navy officials on Thursday night.

“May our common aspirations for regional and global peace and security enable us to become good partners, cooperating and coordinating toward tranquil and safe seas for all,” he said.

Lorenzana said that during his trip to Russia in early December, he agreed with Russian defense officials to finalize a memorandum of understanding that would be the basis of future military engagements, including joint military exercises, so it could be signed during Mr. Duterte’s visit to Moscow.

On Dec. 30, Lorenzana said Russia was “aggressive” in seeking close relations with the Philippines, but not a military alliance.

“They’re very aggressive that we have a military relationship with them. Not an alliance but an exchange of students, personnel, as observers in exercises,” he said.

Russia also wants to sell arms to the Philippines, he said. The Russians offered to sell a submarine, but it was too expensive, he said, adding he did not think the Philippines needed it.

But the Philippines may consider acquiring drones from Russia, he said. —WITH REPORTS FROM REUTERS AND AP